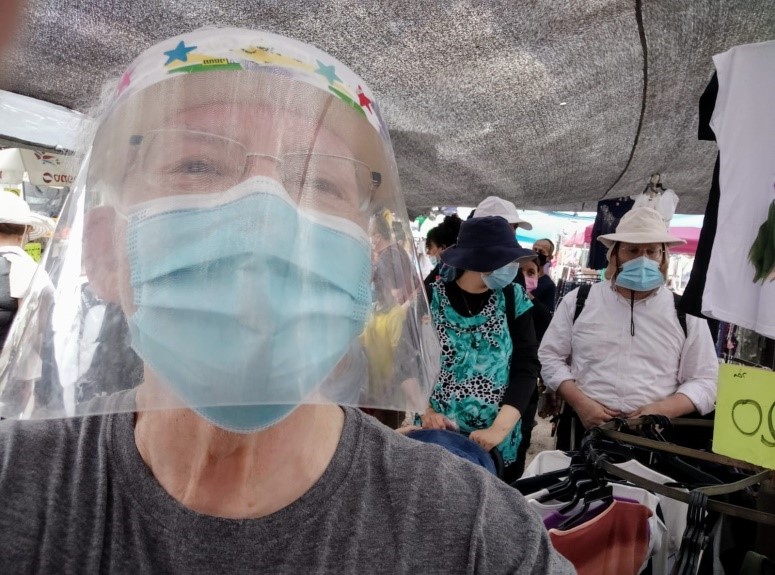 A two-week “vacation” in a Corona hotel! That’s one of three new solutions for stopping the spread of the COVID-19 virus in Israel.

They’ve failed. But instead of yet another rant about how Israelis are all to blame for the daily spike in active cases, the increase in numbers of seriously ill, and the ever-nearing collapse of the health care system, let’s make this clear:

The majority of Israelis do try to follow the rules. At the Ramla shuk, where I go every week, most of the shoppers and stall keepers wear masks. About half wear them properly.

It’s a minority who flout the regulations. Even if you take a day with 600 people at a mass wedding, 10,000 at a demonstration, 3,000 at bars and restaurants, and 1,000 at parties—then you count the same numbers for a month, using different people each time—it’s still a small but significant minority—but extremely “newsworthy.” The rest of us are doing what we can to stay safe, even if we’re not wearing our masks right. Let’s not go into the incompetence of the Israeli government in handling this crisis and creating unbearable confusion (not “unexplained” as in the sign on my synagogue door). That’s been raked over and over, and there’s not much left to say. Just this observation—it’s our government, it represents us, and we voted it into office.

The political distortions that brought this about are the theme of my second book, “Why Are We Still Afraid?” So I won’t repeat that here. There is, however, an aspect of Israeli society and mentality that is contributing to the crisis.

In other developed countries, when the government passes a law or puts out a regulation, the first impulse is to comply. At some point citizens, especially the wealthy, may look for loopholes or exceptions, but by and large, people follow the edicts of their governments.

Here in Israel, our response to a new regulation often is, “How can I get around this?” A law is worth following only if there’s a chance we might get caught breaking it.

The question you hear when the government imposes a new Corona restriction is, “How are they going to enforce that?”

Why are we wearing masks? To make a fashion statement? Of course not. We’re wearing masks to protect ourselves and others from the virus. This should not be a matter of, “you’ll pay a fine if we catch you without a proper mask.” People aren’t wearing their masks on their wrists because they actively want to harm their neighbors and grandparents. They’re doing it as a reflex—“I won’t get caught.” So instead, let’s appeal to the better nature of people and get them to wear masks because it’s the right thing to do, not because they might be punished if they don’t.

Likewise, selective lockdowns should be presented as a way of controlling the spread of the virus, not punishing the people who have caught it.

The second solution is more practical. It is highly uncomfortable to wear a mask over your nose and mouth for any length of time, especially in the summer. There’s a common practice of wearing a mask around your chin and raising it to cover your mouth and nose if you see someone approaching—a big “if” at best.

Israel’s Health Ministry does not recognize face shields as effective enough, and you can’t get into a hospital or clinic while wearing one—but it’s time to consider the better-than-nothing factor, especially outdoors, where the danger of COVID-19 transmission is markedly less than indoors. So we’ve suggested changing the Israeli mentality toward regulations, and we’ve tried getting people to wear masks because it’s responsible behavior, or at least wear a face shield. However, these are long-term solutions, and we’re in a crisis situation. We may already have crossed the point of no return where the pandemic spins out of control, and we may be facing a year or more of extreme hardships before a vaccine is available. And even then, it’s unlikely that our government, or any other government that depends on getting elected, will have the guts to make a safe, reliable vaccination compulsory for everyone except a small number of medically challenged citizens.

As of the end of August, there were 28 Corona hotels here. Their object is to remove Corona patients from their homes and neighborhoods to prevent their spreading the disease to relatives and neighbors. So the hotels are, by definition, the best place to go if you want to guarantee catching the disease.

So you think that COVID-19 is just a form of the flu? That it only hits old folks? That the government is handing this all wrong? So why bother following the regulations? Off you go to a Corona hotel for a nice two-week stay. Then we’ll talk. If you can.

That might be frightening enough to persuade even the most recalcitrant, skeptical, or cantankerous Israelis to wear a mask, wash their hands, stay away from crowds, weddings, and demonstrations, and follow the rules.

And that would stop the spread of the virus in its tracks.

Correspondent MARK LAVIE has covered the Middle East since 1972.