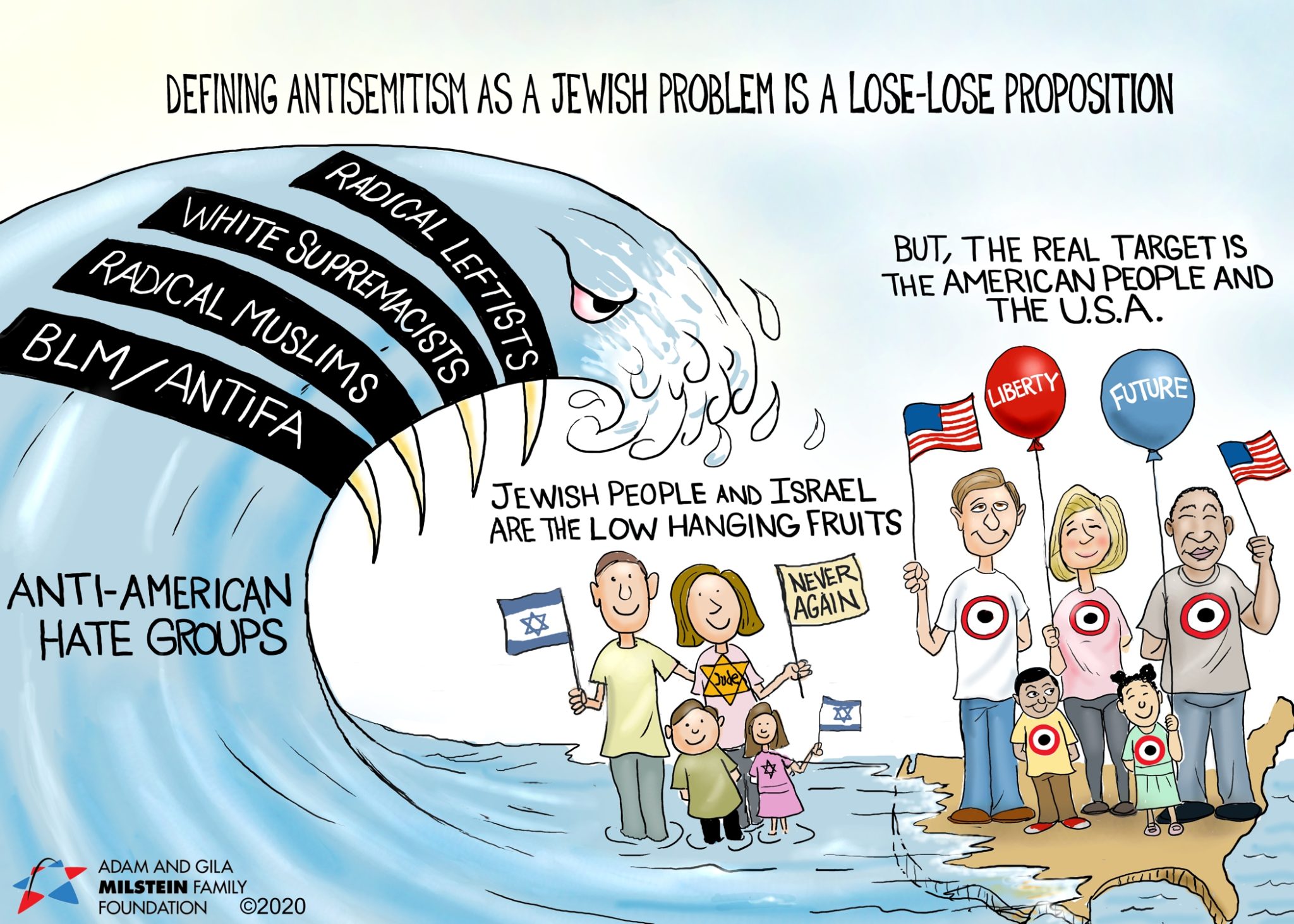 Article originally published in the Jerusalem Post on August 16, 2020. We will lose as Jews and as Americans if we continue accepting our prescribed role as the sacrificial canary in the coal mine.

Antisemitism is an ancient problem. Throughout Jewish history in the diaspora, Jews lacked the power and resources to do much of anything to fight Jew-hatred except condemn it. Today, however, American Jews have established themselves as one of the most successful immigrant communities in the country. Yet, in the face of intensifying antisemitism, they have done little to combat it. Instead, they have focused on merely documenting, educating about, and respectfully objecting to antisemitic acts after they occur.

Inaction has normalized antisemitism and allowed the threat to rise. Jew-hatred has become excusable and almost mainstream in America. In recent months, for example, we have seen it trending among celebrities and athletes. When faced with this hate, far too many in our community stay silent.

Since Jews are the direct target of antisemitism, other Americans perceive Jew-hatred as a Jewish problem. But as American Jews do little to fight this bigotry, non-Jews ask themselves: why should we lead this battle?

Evidently, defining antisemitism as a Jewish problem is a lose-lose proposition.

Jewish-Americans are not going on the offensive to stop antisemitism, and non-Jewish Americans won’t fight battles for those whom – they perceive – don’t have the courage to stand up for themselves.

Jewish-American organizations dedicated to fighting antisemitism have existed for more than 100 years, but the problem has only grown worse. Almost all the resources invested by the Jewish-American community to address Jew-hatred are directed toward historical education, like about the Holocaust, and documenting incidents of antisemitism. Hardly any resources are invested in holding antisemites accountable and creating consequences for their bigotry.

Some of this inaction can be explained by the false sense of security many American Jews cling to despite the alarming rise in hatred and violence toward Jews in America. However, they fail to understand that antisemitism is not just a problem for Jews; Antisemitism is an issue for all Americans and threatens to destroy our way of life.

Radical groups – the radical left, the radical right, radical Muslims, and the radical African Americans who champion Louis Farrakhan – are spearheading efforts to erode the core principles that make our country exceptional. The Islamo-leftist alliance, in particular, is gaining momentum. While many Jewish and other civil rights organizations singularly focus on the far-right white nationalists as the main generators of extremism, the Islamo-leftist alliance parades in public as a social justice cause while infiltrating and undermining our communities and institutions.

Collectively, these radical groups reject the Judeo-Christian values that have supported the foundation of our country and have protected all minority communities in America, including Jews.

Proponents of the Islamo-leftist alliance seek to undermine the structures and institutions that keep our country open, democratic and healthy, including the family unit, businesses, communities, religious institutions, impartial media, law enforcement, the military and the courts. Increasing antisemitic attacks and the public display of hatred are trial runs for what is to come from these radical movements. For years, Jews have been at the receiving end of this hatred. If we are truly ready to overcome it, we must stop playing the victim and start fighting this head-on together with other Americans.

We will lose as Jews and as Americans if we continue accepting our prescribed role as the sacrificial canary in the coal mine, hoping that others may recognize the danger after it has already consumed us whole.

Instead, we need to be eagles looking out onto the horizon, detecting threats far before they grievously harm us and our country. There are practical actions we must take to go on the offensive against antisemitism. They include:

(1) investigating and exposing the radical movements that fuel the spread of this hatred by identifying their networks, money trails and agendas;

(2) increasing knowledge-sharing capabilities that inform the American people about the threats and empower them to act;

(3) holding the media accountable to the standards of a fair and free press;

(4) supporting legislation that curbs the influence of the hate movements in our institutions.

Presenting antisemitism as a Jewish problem has been a lose-lose proposition because it has not spurred anyone to take meaningful action against it. Rather than griping about the problem, it is now time for all Americans to fight against this hatred and racism and for Jews to stand at the forefront of this fight.

Our history and increasingly dangerous reality show that the inalienable rights afforded by the Constitution cannot be taken for granted. We need to fight for our safety and security today so that tomorrow we and future generations can continue living freely and proudly. We must fly into the future as brave eagles and free America from the dangers of antisemitism and the extremism it represents.

The writer is an Israeli-American “philanthropreneur.” He can be reached at adam@milsteinff.org, on Twitter @AdamMilstein, and on Facebook www.facebook.com/AdamMilsteinCP.

Germany will give 100 million euros to PA: “Government must wake up”

Center for Near East Policy Research
191 POSTS0 COMMENTS
© A WEBstationONE.com production, partially funded by the Internet Development Fund and the IDF Link technology. © 2003-2020 All rights reserved. Articles and Special Reports on IsraelBehindTheNews.com are copyrighted. Every reader is welcome to reprint any and all articles, and with citation.
MORE STORIES