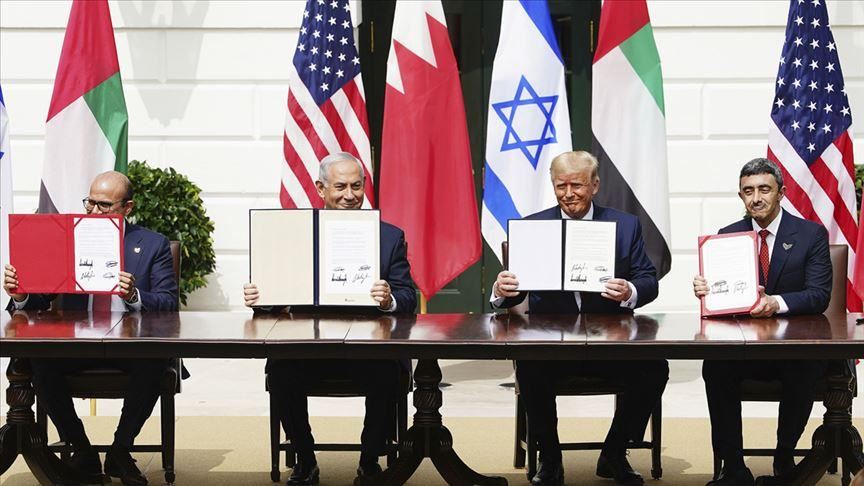 The UAE, ​the United Arab Emirates, an Arab nation strategically located between Saudi Arabia and Iran, signed a solid peace accord with Israel which featured unprecedented clauses of rapprochement and clear commands against any form of incitement:

Peace and Stability: The Parties shall attach profound importance to mutual understanding, cooperation and coordination between them in the spheres of peace and stability, as a fundamental pillar of their relations… to take the necessary steps to prevent any terrorist or hostile activities against each other on or from their respective territories… as well as deny any support for such activities abroad or allowing such support on or from their respective territories.

Cooperation and Agreements in Other Spheres: As an integral part of their commitment to peace, prosperity, diplomatic and friendly relations, cooperation and full normalization, the Parties shall work to advance the cause of peace, stability and prosperity throughout the Middle East…

Mutual Understanding and Co-existence: The Parties undertake to foster mutual understanding, respect, co-existence and a culture of peace between their societies in the spirit of their common ancestor, Abraham, and the new era of peace and friendly relations ushered in by this Treaty, including by cultivating people-to-people programs, interfaith dialogue and cultural, academic, youth, scientific, and other exchanges between their peoples… The Parties shall work together to counter terrorism …by preventing radicalization and recruitment and by combating incitement.

Examples of Severe Anti-Israeli, Anti-Jewish and Anti-Peace Items Found in Schoolbooks Currently Used in UNRWA Schools in the West Bank, the Gaza Strip and East Jerusalem “…[The occupier] has built for himself an artificial entity that derives its identity and the legitimacy of its existence from fairy rales, legends and phantasies and tried in various methods and ways to create living material evidence for these legends, or archaeological [and] architectural proofs that would attest to their correctness and authenticity, but in vain.”
(Arabic Language – the Academic Path, Grade 10, Part 2 (2019) p. 68)

“Al-Buraq Wall
Illumination: The Al-Buraq Wall is thus named after Al-Buraq [the divine beast] that carried the Messenger [Muhammad] in the Nocturnal Journey [from the Mecca mosque to Al-Aqsa Mosque in Jerusalem according to Muslim belief]. Al-Buraq Wall is part of the western wall of Al-Aqsa Mosque. Al-Aqsa Mosque, including the wall, is a Palestinian land and the Muslims’ exclusive right.”
(Islamic Education, Grade 5, Part 1 (2020) p. 63) And a brief historical description of the city “jumps” from the Canaanite period to the Roman one, thus obliterating a thousand years of Jewish history there:

“The city of Jerusalem was known by the name Jebus, after the Arab Jebusites who built it 5,000 years ago. When the Romans occupied it, they called it by the name Aelia. Later, it came to be known as Al-Quds and Bayt al-Maqdis, after the Muslims conquered it at the hands of [Caliph] Umar Bin al-Khattab in the year 637…”
(Geography and Modern and Contemporary History of Palestine, Grade 10, Part 1 (2020) p. 43) The “territories occupied in 1948” are targeted, Haifa and Jaffa specifically, as mentioned in the following piece: And a language exercise says it very clearly:

“We will sing and learn by heart: The Land of the Noble Ones
I swear, I shall sacrifice my blood
in order to water the land of the noble ones
And to remove the usurper [Israel] from my country
and to exterminate the foreigners’ [defeated] remnants
O  land of Al-Aqsa [Mosque] and the sanctuary
O cradle of dignity and nobleness
Patience, patience, for victory is ours
and dawn is peeping from the darkness
(Our Beautiful Language, Grade 3, Part 2 (2019) p. 66. Emphasis added)