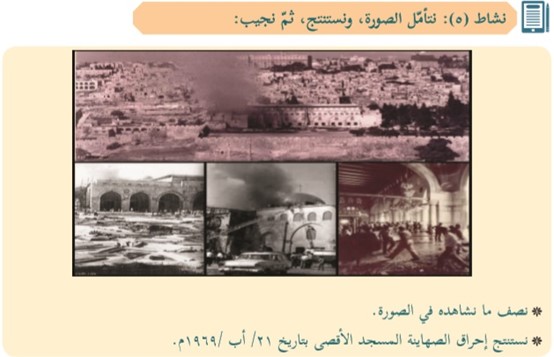 The United Nations Relief and Works Agency for the refugees of the 1948 war (UNRWA) provides educational services to school children registered as refugees in Syria, Lebanon, Jordan, the West Bank (including East Jerusalem) and the Gaza Strip. In the latter two areas it is responsible for the education of about a quarter of the Palestinian student body, with over 320,000 students in some 370 schools. As a matter of self-imposed policy, UNRWA uses in its schools textbooks of the host governments in its various areas of operation. That raises a serious ethical problem, since these books contain crude anti-Israeli, anti-Zionist and even anti-Semitic expressions clearly contradicting UNRWA’s defined neutral and peace-oriented character as a UN organization.

Anti-Semitism in the Arab world is part and parcel of the current conflict, although its roots can be traced to earlier periods. As such, it exists in most Arab curricula. This is the case as well in the Palestinian one, though to a lesser extent, comparing to those of Syria, Saudi Arabia and even Egypt. That is so due, probably, to the fact that the Palestinian textbook publishing operation was partly financed by Western donor states. This assumption is based on an incident that took place in 2004 when the Palestinian Authority (PA) issued a history textbook for grade 10 in which the Protocols of the Elders of Zion were described as the confidential resolutions of the first Zionist Congress, held in Basel, Switzerland, in 1897. Following a report by the author of this paper in 2005, I was asked by the Belgian embassy in Tel Aviv to send them the relevant Arabic page accompanied by an English translation, and a few months later the PA issued a new version of the book without the said description.

Since UNRWA uses the PA schoolbooks with no omissions or amendments, it actually becomes full partner of the PA anti-Israeli and, sometimes, anti-Semitic indoctrination. Anti-Semitic expressions in such schoolbooks have existed throughout UNRWA’s seven-decade activity, mostly within the context of the conflict, but also in the religious context. Following are few expressions taken from the books in current use in UNRWA schools and carrying anti-Semitic character:

The main issue in this context is the Jews of Arabia’s political rivalry with the prophet of Islam in the 7th century AD, which has made them part of the evil camp religiously, with extended connotations to the Jews of today.

“…But the Jews [of the Arabian city of Medina] did not respect the treaty [they had signed with Muhammad] and went in for all kinds of treachery, betrayal and hostility, which made it necessary for the Muslims to fight them.”

“An issue for discussion: the Jews’ recurring attempts to kill the Messenger [Muhammad]”.

“Let us watch a video clip from the attached CD about the Jews’ attempt to kill God’s Messenger [Muhammad].”

“The Jews’ intrigues and plots were the immediate reason for the expedition against [the Jewish village of] Khaybar.”

Jesus Christ is considered God’s prophet in Islam. The following piece is the first lesson derived from the Koranic story about him, thus, presenting the Jews as enemies of other prophets besides Muhammad:

“1. Revealing the Children of Israel’s character and their hostility to the prophets.”

Within the Context of the Conflict

“An issue for discussion: I will discuss the Palestinian woman’s role of sacrifice and steadfastness within the confrontation with the Jewish-Zionist occupier.”

“An issue for discussion: The Jews’ activity [today] of desecrating the graves of some of the Prophet’s Companions and the virtuous men, sweeping and removing them from the Muslim cemeteries in Jerusalem specifically and in Palestine in general.”

In the following example Jews are not mentioned by name, but the context gives a precise indication of their identity, specifically the term “unbelief”:

“Where are the horsemen [who will ride] towards Al-Aqsa [Mosque] to liberate it from the fist of unbelief, from the Devil’s aides?”

Notwithstanding the efforts by anti-Israeli non-Jews, as well as some Jews, to make a distinction between anti-Zionism and anti-Semitism, in practice they are intertwined in the eyes of both Jews and non-Jews. Consequently, some of the anti-Zionist severe expressions appearing in the books used by UNRWA have been given here:

“The Zionists have based their entity [i.e., Israel] on terrorism, extermination [ibadah] and colonialism [isti’mar]. Let us present that in detail.”

“…Let us draw the conclusions regarding the burning of Al-Aqsa Mosque by the Zionists on August 21, 1969.”

(Social Studies, Grade 7, Part 2 (2019) p. 49. The arsonist was an Australian Christian tourist later diagnosed as mentally ill and hospitalized in his country.)

“The Zionists perpetrated over 60 massacres against the Palestinians…”

These expressions are particularly anti-Jewish, as non-Jewish Israelis are considered to be Palestinian and are not intentionally targeted.

The following example is a verse in a poem describing what should be done with the surviving Jewish population of Israel following its defeat:

“Let us sing and learn by heart: The Nobles’ Land [Ard al-Kuramaa’]

I have sworn! I shall sacrifice my blood

To water the nobles’ land

And I shall remove the usurper [ghaseb] from my country

And shall exterminate [ubid] the foreigners’ scattered remnants [fulul al-ghuraba’]

O land of Al-Aqsa [Mosque] and the Sanctuary [haram],

O cradle of pride and nobility

Patience, patience, for victory is ours

And dawn will peep out from darkness” 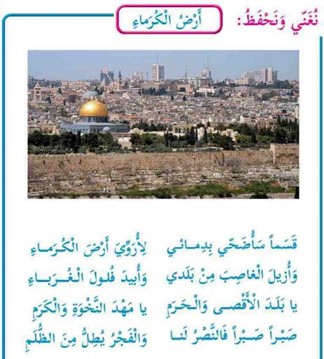 The following piece is dedicated to a female terrorist who led the attack on an Israeli civilian bus in 1978 in which over 30 men, women and children were murdered:

In front of the text:

Our Palestinian history is full of many names of martyrs who presented their souls as a sacrifice for the homeland. Among them is the martyr Dalal al-Mughrabi who painted with her struggle a picture of challenge and heroism that have made her memory eternal in our hearts and minds. The text in front of us provides a glance on the path of her struggle.” 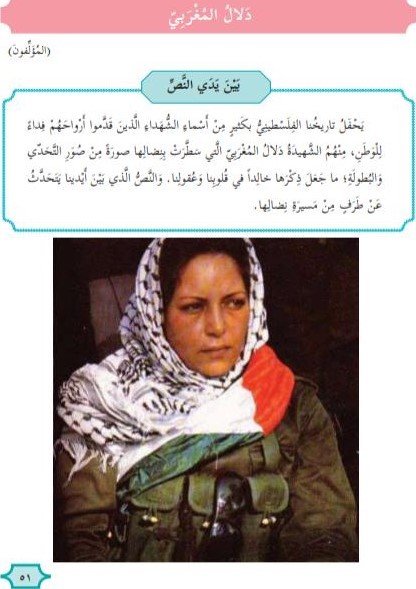 The examples brought in this paper speak for themselves, and there are more. UNRWA donors should answer as to why UNRWA teaches such material and what it intends to do with it after having noticed their venomous character. These and similar expressions of virulent Anti-Semitism have been taught in UNRWA schools for too long!