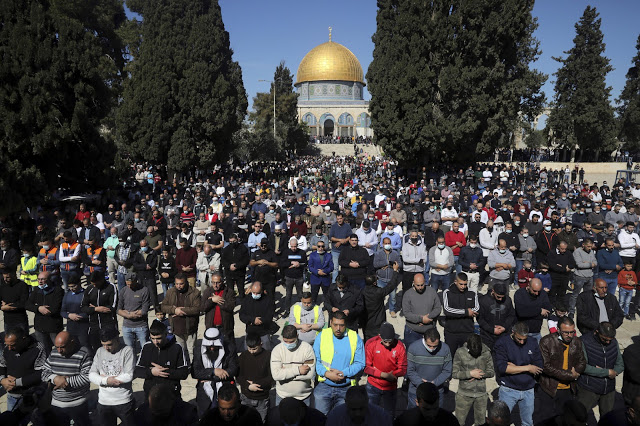 Israeli officials reportedly sent a request last week to the Palestinian Authority and the Jerusalem Muslim Waqf asking that the Israeli government be allowed to open a coronavirus vaccination station in the Temple Mount area, but the request was rejected.
The station was meant to vaccinate mainly Palestinian worshipers visiting the area. The Waqf is a Jordan-affiliated religious authority that administers Muslim religious sites in Jerusalem, including the Al-Aqsa Mosque compound atop the Temple Mount in the Old City.
According to a report by the Kan public broadcaster (Hebrew) on Wednesday, Palestinian Authority President Mahmoud Abbas opposed the idea since, he claimed, the act would give Israeli officialdom a presence in the Al-Aqsa Mosque area. The mosque area on Temple Mount, which is known in Arabic as Haram al-Sharif, is considered one of the most sensitive sites in the Middle East, holding central significance in the Israeli-Palestinian conflict. The Temple Mount is the holiest place in Judaism; al-Aqsa mosque is the third most holy shrine in Islam.

Although this was reported on Thursday, there has been no condemnation of the Palestinian Authority for not accepting free vaccines for thousands of its people.
Which is exactly what critics of Israel have been insisting that Israel do for two months!
This shows yet again that there are very few people who are truly pro-Palestinian. The only, and I mean only, reason not to accept this offer is because it makes Israel look humane, and avoiding that is worth a few Palestinian lives.
But what about the other side of the story. Was this a cynical way for Israel to use the vaccines to make a propaganda victory – to show photos of virtuous Jews vaccinating poor Palestinians and making Israel look good?
Well, no:

After Israel’s initial proposal was refused, a second was reportedly made: that the vaccines be administered by Arab Israeli paramedics and not by Jewish ones, and that they be dressed in clothes that bear no markings of Israeli medical establishments.

That offer was also turned down, the report said.

It is now a mantra. Palestinian lives don’t matter unless Jews can be blamed. The Palestinian Authority would prefer its own people die than be indebted to Jews for saving their lives.
Judging from the photo above showing thousands of Arabs jam packed into the Temple Mount with few of them wearing masks shows once again that Israel cares more about Palestinian lives than Palestinians do.