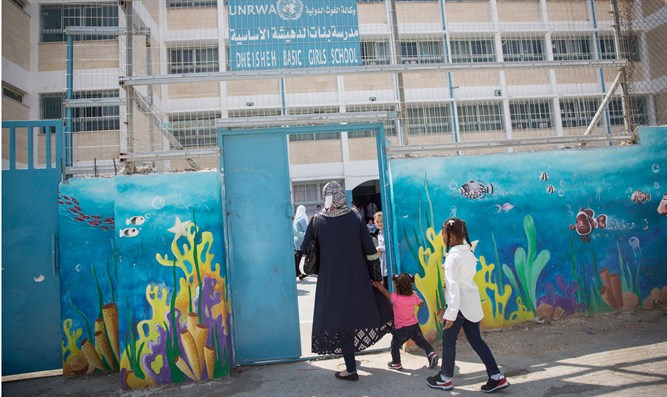 UN Watch Executive Director Hillel Neuer responded to UNRWA’s statement in which it announced a probe into alleged anti-Semitism and anti-Israel bias by its staffers which was exposed in a UN Watch report.

“UNRWA’s reply misses the point entirely. If the agency employs dozens of teachers and school principals who quote Hitler and praise Hamas and Islamic Jihad terrorist attacks, the issue isn’t their social media posts and their so-called ‘neutrality breaches,’ but rather the fact that UNRWA’s education system is repeatedly hiring and putting in the classroom teachers that admire Hitler and propagate hatred and terrorism,” explained Neuer.

“Deleting a post on Facebook does not remove the hate in those teachers’ hearts and minds. It does not solve the problem. And claiming, as UNRWA does in its response, that certain teachers were not employed with UNRWA at the time that they advocated racism or terrorism is equally beside the point. Palestinian children deserve to be fully protected from teachers of hatred and racism. Zero tolerance in schools means you remove racists from the classroom, period,” he added.

“We regret that UNRWA is trying to kill the messenger by maliciously attacking UN Watch for vetting their teachers regarding racism and terrorism, a minimal form of oversight that the agency itself has failed to exercise. UNRWA slanderously accuses us of ‘unfounded and politically-driven assertions,’ yet it fails to cite a single example. By contrast, UN Watch’s series of reports, including our new list of more than 100 UNRWA staffers guilty of incitement, are replete with supporting factual evidence in footnotes, links and screenshots,” continued Neuer.

“Facing serious allegations about widespread support for antisemitism and terrorism among its educators, UNRWA is burying its head in the sand, falsely pretending that these are isolated cases. The opposite is true. We know and have documented that for every UNRWA teacher that praises Hitler or Hamas terrorist attacks on social media, there are dozens of that teacher’s UNRWA colleagues (see report at pp. 46, 47, 162 & 195) and students who endorse the posts. The problem is systemic.”

“Regrettably, in breach of its obligations as a United Nations agency, UNRWA has repeatedly refused to engage with UN Watch, an accredited NGO with the United Nations, regarding evidence of their teachers’ incitement. As documented in our report, since 2015UNRWA has ignored direct requests made to their leadership, including correspondence sent directly to the previous head of UNRWA. If and when UNRWA gets serious about investigating evidence of incitement by their teachers, we remain ready at any time to meet with Commissioner-General Philippe Lazzarini in Geneva, Jerusalem or anywhere else, and to provide substantial additional information that we have collected.”

“Finally, it is unacceptable for UNRWA to make vague and non-specific denials concerning documented evidence of UNRWA staff incitement. Especially given the agency’s ethics crisis and credibility gap that caused Switzerland and other donor countries to freeze funding to UNRWA in 2019, it needs to show minimal transparency and accountability by publicly detailing which charges they reject, and to explain why they are not firing UNRWA teachers who publicly propagate antisemitism and support for terror,” said the UN Watch director.

“We are now calling on UN Secretary-General Antonio Guterres to appoint an independent and impartial commission of inquiry to fully investigate the pandemic of hate that has infected UNRWA’s educational system. UNRWA’s failure to fire a single teacher of hate, and its scurrilous resort to ad hominem attacks on those seeking to combat antisemitism, makes it clear that they are incapable of investigating themselves on incitement, just like on corruption and abuse. They are incapable of protecting Palestinian children from teachers who poison their hearts and minds with an education of hatred and violence,” concluded Neuer.

The UN Watch report revealed that more than 100 of UNRWA’s educators and staff have publicly promoted anti-Semitism and violence on social media, and that on numerous occasions the agency has failed to dismiss teachers who incited such hate.

Following the publication of the UN Watch report, Israel’s Ambassador to the United States and the United Nations Gilad Erdan sent letters of complaint to the Secretary-General of the UN and the Commissioner-General of UNRWA and demanded they take action.