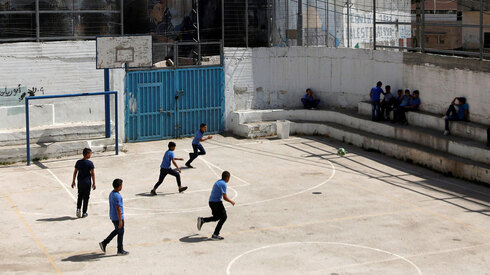 Israel’s Ambassador to the United Nations Gilad Erdan on Tuesday demanded an immediate UN investigation into reports that the Hamas terror group prevented inspections of a recently uncovered attack tunnel under schools in the Gaza Strip operated by the international body’s Palestinian refugee agency.

Erdan’s call came in the wake of a report by Israel’s public broadcaster Kan that UN engineers were prevented from inspecting the safety of a school in Gaza City run by the United Nations Relief and Works Agency (UNRWA) after a tunnel used by Hamas was found beneath the schoolyard two months ago.

An attack tunnel uncovered in the schoolyard of an UNRWA school in Gaza in June (Photo: Twitter)

“The international community cannot ignore Hamas’s heinous human rights violations & the state of terror it inflicts on Gazans,” Erdan said on Twitter.
Israel has long warned about and taken steps to counter the extensive network of tunnels dug by Palestinian terror groups under Gaza to facilitate attacks on Israelis.

Knowing that a #Hamas tunnel runs under a school in #Gaza, @UN experts wanted to investigate whether it was safe to open it for the year. Hamas prevented them from operating and forced them out. https://t.co/noHq8BqplO pic.twitter.com/LQPJ1T06fr

Bomb disposal staff from the United Nations Mine Action Service (UNMAS) arrived at the UNRWA school several days ago, Kan quoted Palestinian sources as saying.
The specialists had been tasked with determining whether the tunnel found under the schoolyard, contained explosives or posed a danger to facility and students, the sources said.
According to Kan, police officers in the Hamas-run Strip arrived at the school and demanded that the UN engineers leave the premises before they were able to to carry out their inspections.