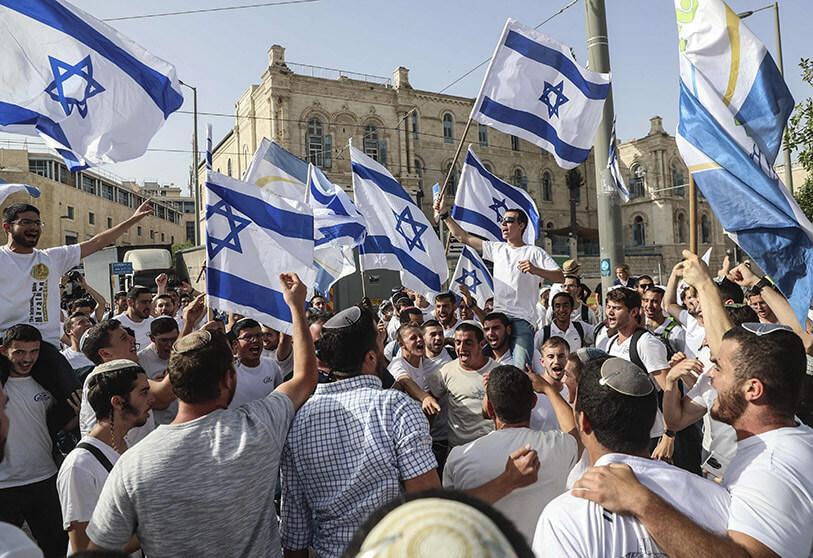 Trying unsuccessfully to change something which cannot be changed is the simple meaning of “whistling in the wind.”

This definition perfectly encapsulates most of the challenges we are facing at the present time.

Whether it is a fruitless exercise in attempting to convince democracies to stand up to the bully tactics of an ever-increasing number of human rights abusing regimes or throwing enormous amounts of money into trying to combat anti-Israel/Jew-hate, the end results so far are a lemon.

Does this mean that we should throw in the towel and refuse to confront bigotry, hate, incitement, demonization, boycotts, delegitimization and efforts to harm us?

On the contrary, it should force us to devise more effective methods of countering these forces of evil and making sure that we act and speak in a far more forceful manner than has hitherto been the case. It also must ensure that our message to so-called friends and reluctant defenders of liberty is loud and clear, devoid of diplomatic and political doublespeak and unambiguous as to the ramifications of what will follow if resolute results are not forthcoming.

How many times must we witness the same old scenarios being enacted with the same dead-end results? The nauseating spectacle of spokespersons, whether Government or representing private groups, prostrating themselves at the feet of the UN and associated bodies in yet another futile attempt to garner some sort of support, must cease. Listening to the lamentations of those whose exhortations for sympathy and action has fallen on barren ground becomes painful especially when it occurs with sickening regularity.

Back in the days of the shtetels and ghettos the lives and security of Jews rested in the unpredictable hands of the local lords of the manor, princes, governors, monarchs and the occasional bishop. Even when “liberty, equality and fraternity” became the law of the land in France and then other countries in Europe and Jews felt they were finally accepted as equal citizens, it didn’t take long before pogroms and discrimination reared their ugly heads.

The Shoah years and the struggles of the newly re-established Jewish State to survive from 1948 onwards should have sent warning signals about how little active support was likely to be forthcoming. Slogans of sympathy and tepid expressions of solidarity more often than not were not followed by any meaningful steps to combat either Jew or Zionist/Israel venom.

Instead of learning the lessons of history we far too often continue to place our total trust in others coming to our aid. Despite numerous rejections, condemnations and censuring, there are still too many who continue to hallucinate that the world will gallop to our rescue before it is too late.

Two examples should suffice to illustrate the situation.

Iran and the rising tsunami of Judeophobia exemplify the futility of what passes for current campaigns to counter these threats to our lives.

The complete failure to deal with Iran’s defiance in its headlong rush to nuclear weapons of mass destruction and the missiles to deliver them has been discussed and analyzed endlessly. Emboldened by international appeasement, Iran has now embarked on the next stage in its quest for imperial domination and elimination of Israel.

Following an election that can only be described as a farce of democracy and which even most Iranians shunned, the duly anointed President has been installed amidst much pomp and ceremony. It is no secret that he comes to take office after having been responsible for the death of thousands of Iranians who dared to voice opposition to the regime. The blood on his hands includes those of women and children but like others of his ilk in other repressive regimes, this inconvenient fact causes nary a ripple in the foreign ministries of the rest of the world. Israel has voiced its condemnation but it might just as well have been whistling in the wind.

What really demonstrated the futility of placing one’s trust in any international moral outrage was the disgusting spectacle of representatives from democratic nations hobnobbing with the likes of terror groups Hamas, Hezbollah and other assorted miserable specimens of humanity at the festive inauguration. The Iranians made great play of the fact that more than 70 countries sent envoys. The sight of an EU diplomat sitting happily amidst those dedicated to the murder of Israelis and Jews and the French President extending his congratulations encapsulates everything that is rotten with the international community’s moral lack of backbone. A leader dedicated to wiping out the “Zionist entity” being feted by those who offer hypocritical lip service to our survival is something we should not be silent or diplomatic about.

Incidentally, it would be useful to know whether Australia and New Zealand, both of whom have a diplomatic presence in Tehran, sent someone to this circus. I haven’t been able to find the answer.

In another classic case of “whistling in the wind” there has been a complete lack of assertive action in response to the Iranian sponsored piracy and terror against shipping. Israel, in a doomed effort to arouse some sort of effective response, appealed to the UN to take action. The USA did likewise knowing full well that China and Russia would scuttle any resolution. Apart from anything else resolutions have never been known to deter terror-supporting States. The Czechs learnt that critical lesson after Munich.

The moral of this exercise in futility is that once again the intended primary victim of Iran’s genocidal ambitions will have to take steps to thwart it thus once again inviting international condemnation. The UK Foreign Office has already washed its hands of having to do anything meaningful. It gave a limp slap to the wrist of the Iranian Ambassador in London and its deputy Ambassador in Israel stated that “it’s up to Israel to deal with the situation.”

The increasing virulence of hate manifestations against Jews has generated more “whistling in the wind” responses. It’s obvious that this virus cannot be defeated by measures that have not hitherto worked yet despite what should be a self-evident fact the responses to the latest wave follow the same dead-end scenarios.

Millions of dollars have been spent on building museums yet the hate keeps rising. Educational outreach is impacting only a minority of impressionable teens and, in countries like New Zealand where Holocaust studies are not officially part of the curriculum, the ignorance level into adulthood looms large. Tours to concentration camps unfortunately do not involve more than a scattering of youth. Meanwhile, social media fosters the spread of denial, revisionist history and the latest mutation of anti-Israel slanders.

What are the current alternative strategies being implemented?

It was announced recently that Germany is going to spend US$40 million on “antisemitism research.” One has to wonder, why after all that has happened in Germany over the centuries, they still need to do any research into the reasons for hate against Jews. It should be self-evident by now. Seven decades after the Shoah, memories have faded, feeling guilty is becoming a thing of the past and increasing right-wing political activity is staging a comeback. Combine that with left-wing anti-Zionist fervour and anti-Israel poisonous incitement from Germany’s increasing Muslim residents and you have an answer as to what is happening. Does throwing millions of dollars into “research” absolve the authorities from dealing with the root causes which all of them are aware of but are too timid to tackle?

In the USA, the Jewish establishment and especially progressive groups have also abdicated any will to call out those promoting hate and incitement against Jews and Israel. The futile depths to which they have sunk are illustrated by the latest campaign to erect billboards and transit ads in major cities. Apart from the fact that everybody who is wedded to social media is unlikely to read them the messages they convey are so pareve as to be meaningless.

For example, we are just 75 years since the gas chambers – so NO, a billboard calling out Jew-hate isn’t an overreaction.

Being woke and antisemitic is like being a vegan who eats veal.

If this is not a perfect case of whistling in the wind I do not know what is.

Hosea, one of our Hebrew prophets, put it perfectly more than a couple of millennia ago.

“For they have sown the wind and they shall reap the whirlwind.”