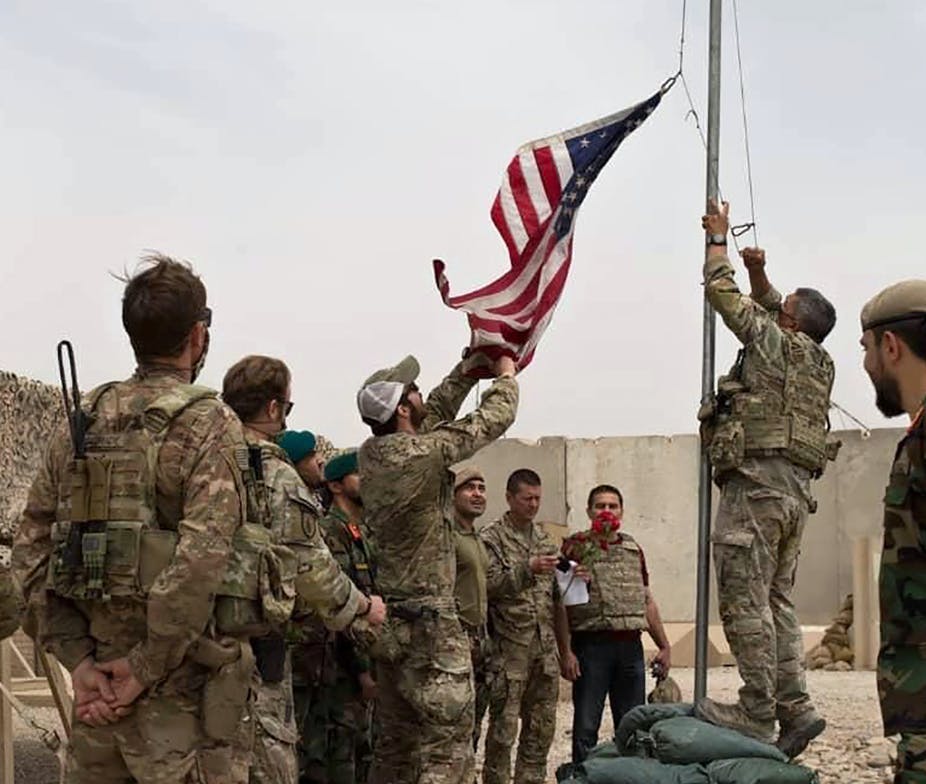 A quoted remark made by the late President John Kennedy succinctly sums up the prevailing situation: “our country was founded by geniuses but is being run by idiots.”

To be fair, the seeds for this latest debacle were planted during the Obama era and it was Trump who clearly articulated America’s surrender to terror by declaring: “It is not the job of American forces to solve ancient conflicts in faraway lands.”

Flashback to UK PM, Neville Chamberlain, who said of Czechoslovakia: “How horrible, fantastic, incredible it is that we should be digging trenches and trying on gas-masks here because of a quarrel in a faraway country between people of whom we know nothing.”

Observing closely other events developing in far-flung areas of the world one can easily conclude that not only are we faced with imbecilic behaviour but that insanity has also infected decision-makers in large swathes of the globe.

In Poland, a law has been passed which makes it virtually impossible for anyone whose property was confiscated by the Nazis and Communists to ever reclaim it. While not mentioning Jews specifically it is precisely Jews who had their residences and businesses stolen who are the primary victims of this edict. The Israeli Government has reacted strongly and as a result relations between the two countries are now at a low ebb. Poland accuses Jewish youth who visit the country and the site of concentration camps of being indoctrinated with anti-Polish hate and threatens to ban such groups.

Some commentators and political “experts” are criticizing Israel for getting “offside” with Poland because this may mean Poland will vote against Israel in the councils of the EU. It has even been suggested that we should “overlook” manifestations of antisemitism for the sake of positive votes in world forums. In my opinion, once we start doing that it will give a green light to the Jew-haters of the world that they can insult us with impunity. Any dubious benefit we might derive from ignoring anti-Jewish behaviour is illusory and it certainly will not diminish the tsunami of anti Israel resolutions.

AIPAC, the pro-Israel advocacy group in the USA recently called out the anti-Israel/Jewish left-wing progressive Democrats known as the “squad” in Congress for their endless selective condemnations of the Jewish State. Lo and behold, riding to the rescue of these clueless Democrats who lose no opportunity to pillory Israel and yet at the same time remain largely mute when it comes to real human rights abuses by known regimes, was the usual collection of breast-beating Jewish organizations. It never ceases to amaze how groups mislabeled as “pro-Israel” always manage to pop up and support the bashers of Zionism and Israel. On this occasion, they condemned AIPAC for having the chutzpah to pick on Congressional critics whose knee jerk aversion to anything Israel may do or not do is almost a daily occurrence. Whether it’s the New Israel Fund, Peace Now or Btselem the same names keep popping up.

The EU Court of Justice has issued a ruling which authorizes employers to ban employees from wearing identifiable religious clothing. That means Christians are forbidden to wear a cross, Jews are forbidden to wear a kippah and Muslim & Jewish women cannot cover their hair. Presumably, male Sikhs are also banned from wearing a turban. No peep of outrage has been heard from the usual suspects who at the mention of the word Israel, convulse in righteous indignation and demonstrate against imaginary injustices.

Our Prime Minister, Naftali Bennett is visiting President Biden and although Iran will be the focus one can confidently predict that the American Administration will trot out the same inane mantra in which Mahmoud Abbas is portrayed as a dove of peace and his terror-supporting PA as a paragon of democracy and a liberal guardian of civil rights. This hallucinatory mirage remains despite evidence to the contrary and is embraced by progressives in Israel as well as overseas. In fact, part of the current coalition is composed of those who fervently believe that all we have to do is abandon historical and legal parts of our country and universal peace will break out.

Well, here are a few incontrovertible and inconvenient facts which Bennett should confront Biden with and then in order to make sure that the message is not lost in the swamp of Washington should be disseminated to the media and the public at large.

This summer has been a scorcher, weather-wise and as far as fires are concerned. The devastating conflagrations are blamed by certain groups on climate change. In actual fact, it has not been anything to do with temperatures because every summer which stretches over six months or so, the forests, planted so lovingly by the JNF, become tinder dry. All the fires have been started by humans, whether as a result of occasional camping negligence or as is mostly the case by acts of deliberate arson terror. Balloons with incendiary devices are launched daily from Gaza and destroy swathes of vegetation. The standard response on our part is to bomb specified targets. As the balloons keep coming it is obvious that something more deterrent must be employed but this is where serious action does not match inflated rhetoric.

Crowds of civilians are encouraged by Hamas to storm the border and cause mayhem as well as casualties. The terrorists threaten to up the terror if more dollars are not allowed to be transferred to Gaza. We issue dire warnings and then miraculously it is announced that agreement has been reached that Qatari funds will be flowing into the terrorist territory. Not so long ago our politicians huffed and puffed that unless the bodies of our kidnapped IDF soldiers were returned nothing would enter Gaza. Lo and behold as is so often the case with political hot air the latest arrangement makes no mention of the return of any bodies. To make matters worse it transpires that the latest lot of money will be disbursed under the supervision of UNRWA, allegedly to circumvent it falling into the hands of Hamas.

This is the most cynical confidence trick that has been perpetrated in recent times because UNRWA operates only with the permission of Hamas and therefore it doesn’t take a genius to work out who will be laughing all the way to the bank.

In a related piece of news, Egypt has closed its border crossing with Gaza because of “tensions” with Hamas leaders. Do you by any remote chance see howls of outrage from those normally frothing about Israel’s border “control” of Gaza?

While all this is occurring the PA “doves” in Ramallah are busy inciting and promoting terror. Much has been made of the fact that the PA sent a few fire fighting units to help in the recent major conflagrations in the Judean hills outside Jerusalem. If the truth be known they did so mainly because Arab communities were also threatened with destruction. However, even if they did so over genuine fraternal feelings of solidarity, subsequent incitement soon should have disabused even the most gullible that the messianic age was about to dawn.

Details of the PA’s latest gestures of ill intent will be detailed in a subsequent op-ed.

Latest reports state that the head of the CIA has been having “talks” with the Taliban. If that is the American Administration’s brilliant idea on how to defeat terrorists then needless to say no amount of evidence about Fatah/Hamas terror and incitement will convince them to see reality. A past delusional Israeli Government tried appeasing terror and all we received in return was an Arafat inspired reign of murder and terror. Another set of delusional leaders scuttled out of Gaza and as a result, we face rockets and arson balloons. Yet another bunch of pie in the sky politicians withdrew overnight from south Lebanon on the strength of worthless UN guarantees. In return, we now face Hezbollah and its arsenal of over 150,000 rockets.

If you want to know how America’s abandonment of Afghanis has been greeted by Israel-haters watch this, courtesy of MEMRI: