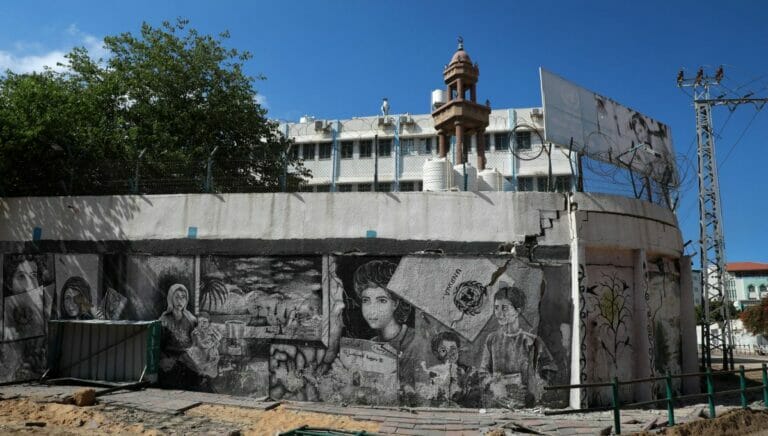 In order to raise money for the United Nations Palestinian Relief Agency ( UNRWA ), Jordan and Sweden have invited to an international ministerial conference in Brussels on November 16, 2021.

The UNRWA is extremely controversial internationally, partly because the organization uses textbooks in the schools it runs, in which mass murderers like the Fatah terrorist Dalal Mughrabi are presented as role models for the students. In addition , UNRWA employees regularly use social media to spread calls for violence and anti-Semitic propaganda.

For this reason, states have repeatedly temporarily suspended their payments to UNRWA in the past, including Canada, the USA, Belgium, Switzerland and the United Arab Emirates.

The purpose of the conference, according to the UNRWA website, is “to provide the agency with financial stability and predictability of funding”. UNRWA also calls for a “relentless commitment to humanitarian principles, including neutrality, against political attacks”.

The statement seems paradoxical, after all, there are the supposed “political attacks” on UNRWA – what is really meant is: any criticism of wrongdoing by UNRWA, promoting terrorism and inciting hatred – only because it persistently lacks any neutrality.

According to a report published in August by the non-governmental organization UN Watch , an independent human rights group based in Geneva, over 100 UNRWA educators and workers publicly incited violence and spread anti-Semitism on social media.

The report with the title “ Beyond the Textbooks ” reveals 22 current cases of incitement by UNRWA employees who clearly violate the aid organization’s own rules and the values ​​it proclaims, as well as “zero tolerance” towards racism , Violate discrimination or anti-Semitism.

UN Watch called on the aid agency’s most important donors – including the USA, Germany, Great Britain and the European Union – to oblige UNRWA to adhere to their own standards and commitments.

In a letter that Hillel Neuer, the executive director of UN Watch , sent to UNRWA Commissioner General Philippe Lazzarini at the end of October, Neuer asked Lazzarini to find out “which of the aforementioned employees have since been suspended”.

Neuer accused Lazzarini of refusing to “examine the extensive research and documentation by UN Watch that shows UNRWA’s failure to apply its alleged ‘zero tolerance’ policy towards teachers who incite racism and violence”. At the same time, UNRWA is trying to “kill the messenger by maliciously defaming UN Watch ” because the organization “offers a minimal form of oversight that UNRWA itself has not exercised.”

“If UNRWA repeatedly places teachers who glorify Hitler in front of a classroom for young Palestinian students, then that is child abuse.”

Mena-Watch spoke about the UNRWA Funders Conference with David Bedein, the founder and director of the Bedein Center for Near East Policy Research , who has been monitoring UNRWA and its work for decades . Bedein says:

“The news and research office that I have been running since 1987 focuses on UNRWA in the hope that one day the 5.3 million descendants of Arab refugees in 1948 who are in 59 refugee camps dependent on UNRWA care find an appropriate humanitarian solution to their plight. ”

Bedein calls the UNRWA donor countries’ meeting in Brussels next week a “positive development”, as UNRWA donors could jointly play a “constructive role in providing the best possible services to the Palestinian refugee population”.

Since the international donors’ conference intends to deal with the entire UNRWA policy, Bedein directs a list of questions to the government representatives who have gathered. He wanted to know “whether these nations have the following six questions about UNRWA policy on the table”:

• Do donors insist that the UNRWA curriculum, which includes the principles of jihad, martyrdom and the “right of return ” by force of arms, be repealed in UN schools that are to be based on the UNRWA slogan “ Peace begins here ” will?

• Will donors insist that paramilitary training cease in all UNRWA schools that are committed to UN principles of ‘peace education’?

• Will donors insist that UNRWA dismiss Hamas-affiliated workers in accordance with Western laws prohibiting support for organizations that employ members of a terrorist organization?

• Will donors insist that UNRWA terminate its contract with “ Youth Ambassador ” Mohammad Assaf, who travels the world and promotes violence? Wouldn’t this be the right time for donor countries to call on UNRWA to dissolve this warmonger treaty?

Not all readers will be familiar with Mohammad Assaf . He was the winner of the second season of the song casting competition ” Arab Idol ” , which had its final on June 22, 2013. Assaf, who was born in 1990 and grew up in the Gaza Strip, is the grandson of refugees from the Arab-Israeli war of 1948 and, according to the Süddeutsche Zeitung, is considered “the Tom Cruise of the Middle East”.

The song with which he won first prize in the singing competition consists of pompous blood-and-soil lyrics; he praises heroes, martyrs and violence, praises bloodshed. In the accompanying video you can see young men – in film recordings as well as heroically idealizing drawings – throwing or throwing stones.

Assaf includes the Israeli cities of Safed, Tiberias, Nazareth, Bet Shean, Akko, Haifa and the entire region of Galilee as part of the “Palestine” that needs to be liberated. Jerusalem of course anyway. Those who kill or seek to kill Jewish civilians with knives, he praised in the past on his Facebook page as “martyrs”.

Spiegel Online wrote in 2013 about Assaf’s victory in the singing competition: “Assaf himself dedicated his success to ‘the Palestinian people who have been under occupation for over 60 years'”. The journalists found nothing unusual about the fact that Assaf dates the beginning of the “occupation” to the establishment of the Israeli state.

• Do donors insist on a review of donor funds flowing into UNRWA?

It is about wasted resources and the “flow of money to Gaza-based terrorist groups that have taken control of UNRWA’s operations in Gaza over the past 18 years,” said Bedein. He also wants to know:

• After more than 70 years, will donors insist that UNRWA implement UNHCR standards to encourage resettlement of Arab refugees?

You have to know that the objectives of the two UN refugee agencies – that for the descendants of the Arab refugees of the Arab-Israeli war of 1948 and that for the 82 million refugees worldwide – are fundamentally different, yes: contradicting each other. The task of the UNHCR is to solve an existing refugee problem , the goal of the UNRWA, however, is to preserve it for all eternity .

The UNHCR is to help refugees to lead a normal life independently as soon as possible. If that is not possible in their country of origin, he tries to find a new home for the refugees and helps them to apply for asylum or otherwise meet the legal requirements for immigration to another country.

On the other hand, UNRWA, which officially has a “temporary” contract that is extended every three years, is supposed to “provisionally” look after all refugees and their descendants in “refugee camps” until Israel is destroyed and they are transferred to theirs by Mohammad Assaf sung about “home” to “return”. UNRWA is prohibited from doing anything that relieves those they care for from the misery of the refugees.

UNRWA itself wrote on the occasion of its 60th anniversary:

“UNRWA has no mandate to find lasting solutions for the Palestinian refugees, although in the first years of its existence it still had the right to pursue activities that promote the integration of refugees in their host countries.”

“Current UNRWA policy is that the resettlement of refugees constitutes the ‘right of return’ to Arab villages established before 1948 [in the State of Israel under the 1949 Armistice Line; SF] existed, ”says David Bedein.

UNRWA is treating Israel as a makeshift

And that is the core problem and the reason why UNRWA is one of the greatest obstacles to peace : By letting the descendants of the refugees in “refugee camps” vegetate in a “temporary” state, it deprives them of the chance of a self-determined life and nourishes them persevering in the hope that one day Israel will be destroyed and the promise of the “right of return” for five, six or seven million “refugees” will be fulfilled.

UNRWA is formally subordinate to the UN, but receives over 90 percent of its budget directly from individual states. It is the responsibility of these states to ensure that the money they give does not lead to more hatred, violence and bloodshed – and that the misery of the “refugee camps” is ended once and for all instead of continuing forever for political and ideological reasons.