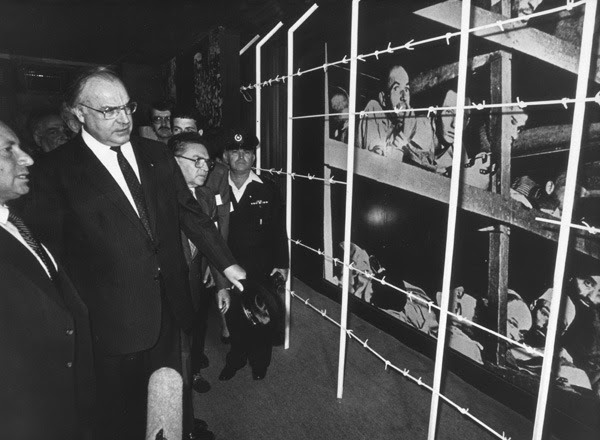 There’s an unsettling truth that defines Yad Vashem: It is not a Jewish institution.
Yad Vashem might be located in Israel and a part of the official state. But the Holocaust center was built by German cement and steel. Money from German reparations, meant for survivors, went to build and maintain the 44.5-acre complex. In exchange, West Germany demanded a say in virtually every aspect of the institution. Bonn imposed an agenda on Yad Vashem in which Hitler became marginal to the killing of more than six million Jews. The German masses — from the man on the street to senior officials — were largely ignorant of and certainly powerless to stop the extermination.

The main player in promoting the German narrative was Yehuda Bauer, the longtime research chief of Yad Vashem. A shadowy figure in the Palmach in the 1940s and the Marxist Mapam Party in the 1950s, Bauer’s reputation grew amid his endless lecture tours in West Germany and the United States, known as a “sort of traveling salesman for Israeli Holocaust research.” In 1977, Bauer came out in defense of Hitler, saying that the fuehrer ordered the end of the deportation of Jews from Budapest in mid-1944.

Three years later, Bauer published an article in a leading U.S. academic journal that the Germans had never planned or even sought the Final Solution until midway through World War II. Instead, the Nazis simply wanted to expel the Jews from Germany. Hitler’s dilemma came when Germany conquered most of Europe in 1940 and 1941 and didn’t know what to do with the Jews.

That apology became Yad Vashem’s message to the world. A video produced by Yad Vashem called “What Is the Holocaust?” [https://www.yadvashem.org/…/video…/hevt-whatis.html…] deals with Hitler’s conquest of most of Europe, including millions of Jews. Berlin tried to find places to resettle the Jews. Lublin, Poland didn’t work. The Soviet Union refused to accept them. Even Madagascar was considered and dismissed. Yad Vashem researcher David Silberklang said the Jewish ghettos were established in Poland by regional Nazi commanders as a “holding pen” until a solution was found for the Jews.
“Because as Germany now looked around and saw they had even more millions of Jews under their rule and there was nowhere to send them and there was no other solution, they felt themselves ironically trapped, and now they had to deal with the problem of so many millions of Jews” Silberklang, now a senior historian at Yad Vashem, said. “And they determined that the only way to deal with the problem was to kill the problem. But it was a process to reach their decision.”

The explanation is worth analyzing. First, Silberklang’s insistence that the Nazis were burdened with a Jewish problem that needed a solution. That assumed that the victims rather than the aggressors needed to disappear. Second, the Nazi problem with the Jews was that they were alive — whether in Germany or any other location, including Palestine. His emphasis on Berlin’s efforts to resettle the Jews, rejected by leading German historians, suggests that Hitler was essentially a reasonable man forced to conduct the greatest genocide in history. This was not an explanation: it was a rationalization that bordered on justification. In other words, the Jewish problem was real; the solution was unsuitable.
Compare Yad Vashem’s narrative to that of the gentile judges at the Nuremberg trials in the late 1940s. The judges, largely blase about the Final Solution, felt no need to delve into the feelings of the Third Reich toward the Jews. They ruled that Hitler had persecuted Jews to attain power and his oppression increased until six million were murdered. The Holocaust, the judges said, was “planned by Germans, ordered by Germans, committed by Germans under a government which the German people willingly chose and which to a large degree, they enthusiastically supported — at least as long as it was crowned with success.”

What Yad Vashem did was essentially adopt the narrative of post-war Germany, particularly its pro-Nazi chancellor, Konrad Adenauer. Indeed, an entire school of German researchers emerged that claimed that the Holocaust played a marginal role in the Hitler regime. Hans Mommsen, the leader of the so-called “functionalists,” argued that the extermination of Jews was the work of “extremists in the party bureaucracy and in the SS.” He made a fortune by becoming an apologist for former Nazis, particularly Alfred Toepfer, who after the war financed research meant to whitewash German industrialists under Hitler. Mommsen even dismissed Hitler’s role, saying he was “a weak dictator” and unaware of what was taking place in his country.

Eventually, Mommsen was commemorated in Israel. In 1980, he was invited as a guest professor at Hebrew University, which supported Yad Vashem from its inception. He became a godfather to Yad Vashem’s senior staffers, particularly Bauer. In an interview with Yad Vashem, which later eulogized him as a “scion of a dynasty of historians,” Mommsen peddled the claim that the extermination was initiated and developed by local Nazi officials, particularly Adolf Eichmann and Odilo Globocnik, unable to find a place for the Jews in occupied Europe and acted against the wishes of the German people. Notice how similar Mommsen’s explanation is to Silberklang’s, who credits Mommsen with a “very significant contributions to Holocaust studies.”

“Undeniably, there existed a consensus about getting rid of the Jews,” Mommsen said in 2000. “But it was a different question whether to kill them or to press them to leave the country. Actually, with respect to this question the Nazi regime moved into an impasse, because the enforced emigration was surpassed by the extension of the area of German power. There did not exist any clear-cut concept until 1941. The process of cumulative radicalization of the anti-Jewish measures sprang up from a self-induced production of emergency situations which nurtured the process.”

Germany has been intolerant to any other narrative. When Berlin was unhappy with Yad Vashem’s research, it merely severed funding. This first took place in the mid-1950s when Yad Vashem focused on wartime resistance to the Nazis. Eventually, the Conference on Jewish Material Claims Against Germany, the corrupt funnel for German reparations, was given a seat on Yad Vashem’s directorate and became involved in publications. The conference financed books meant to whitewash Rudolf Kastner, who worked with the SS in 1944 to send more than 400,000 Jews to the gas chambers in Auschwitz. Kastner, assassinated in 1957 by an Israeli secret police agent, had worked with Kurt Becher, an SS colonel who became a leading businessman in post-war Germany and a confidant of its leadership.

Germany’s reach extended to Israeli researchers, some of whom pocketed hundreds of thousands of dollars from Bonn and later Berlin. A survey in 2002 by the Jerusalem Center for Public Affairs concluded that more than half of Israeli Holocaust researchers were believed to have benefited from German largesse. To ensure that they stuck to Berlin’s agenda, German diplomats would attend presentations by the benefactors.
The biggest challenge to the German and Yad Vashem narrative took place in the mid-1990s. A young American researcher, Daniel Jonah Goldhagen, citing Nazi documents, wrote a book that asserted that a large segment of German society knew and supported the Final Solution. Goldhagen’s “Hitler’s Willing Executioners: Ordinary Germans and the Holocaust” became a bestseller in Germany, particularly among young people.
Yad Vashem’s Bauer was drafted to rebut Goldhagen. It was a role the institution had been comfortable with since the 1960s, censoring or boycotting Holocaust researchers, particularly the renowned Raul Hilberg, when they angered Germany. In January 1998, Bauer was brought to Berlin by the Israeli Foreign Ministry to explain the Holocaust to the German people. He addressed the Bundestag and dismissed Goldhagen’s thesis as virtually racist. Bauer argued that the German failure to stop the Final Solution stemmed from a “general queasiness regarding the Jews…This queasiness made it practically impossible for a general protest against the murder of Jews to develop.”

How much of Bauer’s argument that the Jews were simply nauseating resonated with ordinary Germans was debatable. But his explanation was embraced by the nation’s rich and famous. Nine months after Bauer’s speech, Martin Walser, a celebrated author and former Nazi, accepted a peace prize in a Frankfurt church packed with the leaders of Germany’s political, business and cultural elite. Walser said he was sick and tired of discussing the Nazi years, particularly Auschwitz. He also opposed a Holocaust memorial in Berlin.
“I would like to understand why in this decade the past is shown like never before,” Walser asked.
All 1,200 members of the audience — with the exception of the head of the German Jewish community and his wife — stood and applauded.

Steve Rodan and Elly Sinclair are the authors of “In Jewish Blood: The Zionist Alliance with Germany, 1933-1963” available on Amazon.
Amazon.com