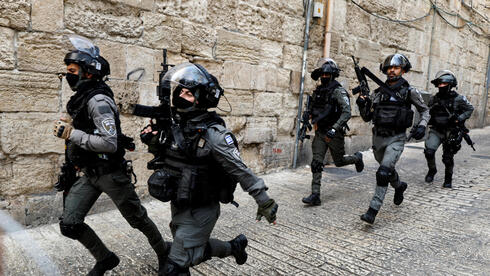 The violent clashes on Temple Mount that broke out last Friday and resumed on Sunday, did not break out spontaneously.

The scope of violence required means and advanced preparation, which are the result of daily efforts by some Palestinians.

Police troops in the Old City of Jerusalem on Sunday (Photo: Reuters)
The rioters on Sunday, were told to remain inside the al-Aqsa mosque, by activists in order to engage with the police.

Calls on loud speakers urge Palestinian youth to stay and ‘protect the Muslim holy sight’ claiming it was under threat from Jews, as the instigators called on the Hamas rulers of Gaza, to join in the defense of the mosques by launching rocket fire on Israel.
Police officials said on Sunday, that ahead of the visit of non-Muslims on Temple Mount, hundreds of Palestinian youth began accumulating stones and other objects and set up makeshift barrier to be used in the intended clashes.

A barrier erected by Palestinian youth to prevent the visit of Jews on Temple Mount on Sunday (Photo: Police Spokesperson)

“Police forces are working to remove the barriers and the stones from the site in order to ensure the safety of visitors,” the police said.
“We intend to enable visits to Temple Mount and the freedom of worship for all faiths,” the force said in a statement.

Jerusalem Mufti, Mohammed al-Husseini the Sunni Muslim cleric in charge of Jerusalem’s Islamic holy places, his deputy, the chairman of the Supreme Muslim Council, and the director of the al- Aqsa mosque are all charged with the management of the site.
Some among them are regarded by Israeli security officials as dominant forces behind the violence, Although the Waqf refrains from participation in the violence.
The Waqf officials condemned the police actions and their silence on the rioting, was seen as a tacit agreement to the violence.

The protesting youth, police sources said, calling themselves, the gang of al-Aqsa, are mostly residents of east Jerusalem. They are affiliated with various religious political factions including followers of the Hamas terror group. Their numbers are in the hundreds and their motivation to clash with Israeli forces, is high.

According to sources, the youth who have been rioting, are led by a 43-year old resident of the city, Nihad Zreiyer who is close to the Fatah faction.
The group, the sources said is funded by the Palestinian Authority, contribution of local residents as well as funds sent from Turkey.

The group used fire crackers, stones and other objects that were hurled at the police. Those were smuggled into the mosque compound over days in advance, and prepared in several locations.
In their signs and chants, the rioters expressed support for the Hamas and Islamic Jihad