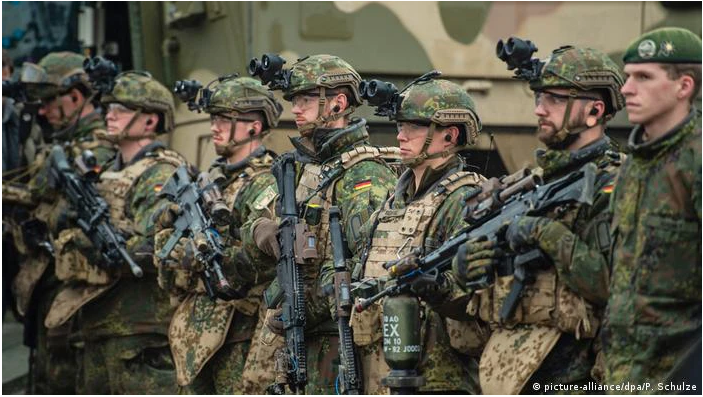 We’re starting another publication. We’re not really sure how this will proceed. But our aim is to inform our readers on the strategic repercussions of decisions that have been overlooked or played down by the open media.

Our first edition is about what we believe is the most important development since the end of World War II: the rearming of Germany. As the West crows about the Russian invasion of Ukraine, Berlin, with nuclear weapons capability, has implemented a plan worked out with Washington for years, if not decades.

German troops prepare for an operation in 2019. [DW]

In the movie “Charlie Wilson’s War,” a congressman from Texas who wants to increase funds to the CIA has come under investigation for drugs and other vices. Wilson’s CIA handler, however, doesn’t flinch. He sees this as good news.

“As long as the press expects it to be on the left hand, you can park a battleship carrier group in the right hand and nobody’s going to notice,” the CIA man, played by Philip Seymour Hoffman, said.

While the mini-war takes place in Ukraine, the West has overlooked the most dangerous threat in a century. It is something that has European strategists up at night and explains their governments’ lack of enthusiasm to confront Moscow.

For the first time since World War II, Germany has been rearming — with the approval of the United States. The diversion was the Russian invasion of Ukraine.

On Feb. 27, only days after Russia began air strikes on Kiev, Germany convened its parliament in a special session on Sunday. Chancellor Olaf Scholz called for a special fund of 100 billion euro, or $112 billion, for military procurement as part of a plan to allocate more than two percent of Germany’s gross domestic product to the military.

“We will have to invest more in the security of our country to protect out freedom and democracy,” Scholz said.

Within half an hour, Germany shed nearly 75 years of pacifism. Scholz had begun the rearming of Germany. From then, things moved quickly. On March 16, Finance Minister Christian Lindner submitted a revised budget for 2022. He also handed parliament a bill that ensured that the defense fund, known as Sondervermögen, would be in the hands of the Cabinet rather than legislators. The legislation would also ensure that defense spending bypasses limits on the national debt.

The government wants parliamentary approval as well as an amendment to the constitution to be completed within a month or two. The entire Defense Ministry and military would require retraining to deal with the rapid arms buildup. By 2025, Germany plans to amass enough weapons and platforms to become one of the most powerful countries in Europe. Only the United States and China would spend more money on defense.

The arms buildup has begun in an ominous veil of secrecy. Scholz never told parliament or any other outsider what Berlin would procure and why. The chancellor, who has warned that Germany was dependent on Russian energy, never specified the military threat to Germany, which before the announcement pledged to spend three percent of GDP on defense.

What is clear is that the war in Ukraine has been used to justify German ambitions to become the leading military power in Europe. The rearmament has begun with the blessings if not encouragement of the United States, which will sell the super-expensive yet dubious F-35 Joint Strike Fighter to Berlin. Washington has long pressed Germany to increase its budget to at least two percent of GDP.

In the meantime, Berlin has emerged as the strongest European defense ally of Washington. Germany, overturning its long opposition to military intervention, has openly sent anti-tank and anti-aircraft missiles to Ukraine.

Scholz did not need to employ a hard sell to rearm Germany. Some 69 percent of Germans support the militarization of their country and ending dependence on Washington and NATO. A German military that could push around the rest of Europe could fulfill the dreams of everybody from the kaiser to Hitler — gaining access to energy and grain.

And that’s where Ukraine, the second largest country in Europe, comes in: Germany has never forgotten its dreams of taking over large parts of Poland and Ukraine. Kiev produces three percent of the world’s grain, 16 percent of grain exports. Ukraine is situated along the largest natural gas pipeline route in the world, much of the energy from neighboring Russia. Little wonder that the European Union has been pouring in billions of dollars to maintain the energy flow from this corrupt and destitute nation.

The joker in this high-stakes game is the nuclear option. Will Washington allow Germany to turn into a nuclear power. For nearly 60 years, Berlin, partly through its cooperation with Israel, has accumulated the technology and expertise needed to rapidly assemble atomic bombs. It’s just a question of just turning a lever in one of Germany’s numerous nuclear reactors.

At that point, all that will be missing is the man with the funny mustache.