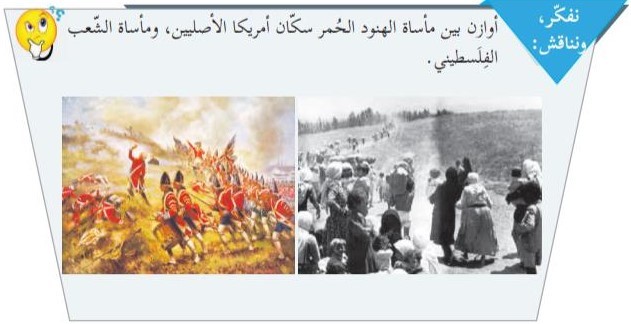 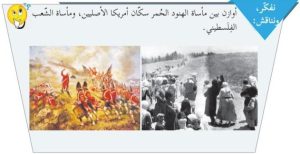 The Al-Buraq Wall has been named after Al-Buraq [the divine beast] that carried the Messenger [of God, i.e., Muhammad] during the Nocturnal Journey [from Mecca to Al-Aqsa Mosque in Jerusalem, according to Islamic belief] and the Ascension [to Heaven]. The Al-Buraq Wall is part of the western wall of Al-Aqsa Mosque. Al-Aqsa Mosque, including the wall, is Palestinian land and an exclusive right of the Muslims.” 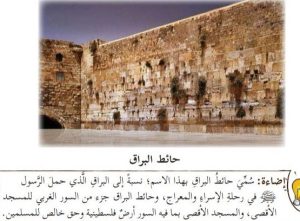 “The city of Jerusalem was known as ‘Jebus’ after the Arab Jebusites who built it 5000 years ago. When the Romans occupied it they named it ‘Aelia’. Later on it came to be known as ‘Al-Quds’ or ‘Bayt al-Maqdis’, after the Muslims had conquered it at the hands of Caliph Umar ibn al-Khattab in 637 CE…”

Encouraging the Murder of Jews

The murder of Jews is featured as an integral part of the liberation struggle, and featured on the first page of a four-page lesson exalting the female commander of a terror attack against an Israeli civilian bus on Israel’s Coastal Highway in 1978 where over thirty Jews – men, women and children – were murdered:

In front of the text: Our Palestinian history is replete with many names of martyrs who sacrificed their souls for the homeland, among whom is the martyr Dalal al-Mughrabi, who painted with her struggle a picture of challenge and bravery that has made her memory eternal within our hearts and minds. The text before us shows her struggle and journey.”  (Arabic Language, Grade 5, Part 2) 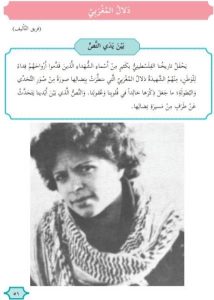 In conclusion, the nascent Palestinian Authority textbooks de-legitimize the existence of the State of Israel, and the very presence of its 7 million Jewish citizens in the country, whose history and holy places there are denied.

The PA books never advocate a peaceful solution. Instead, they call for a violent struggle for the liberation of all of Palestine, with strong religious characteristics, which is not limited by the 1967 lines and in which terror plays a central role.

In other words, PA education allows no room for a “two-state solution”.