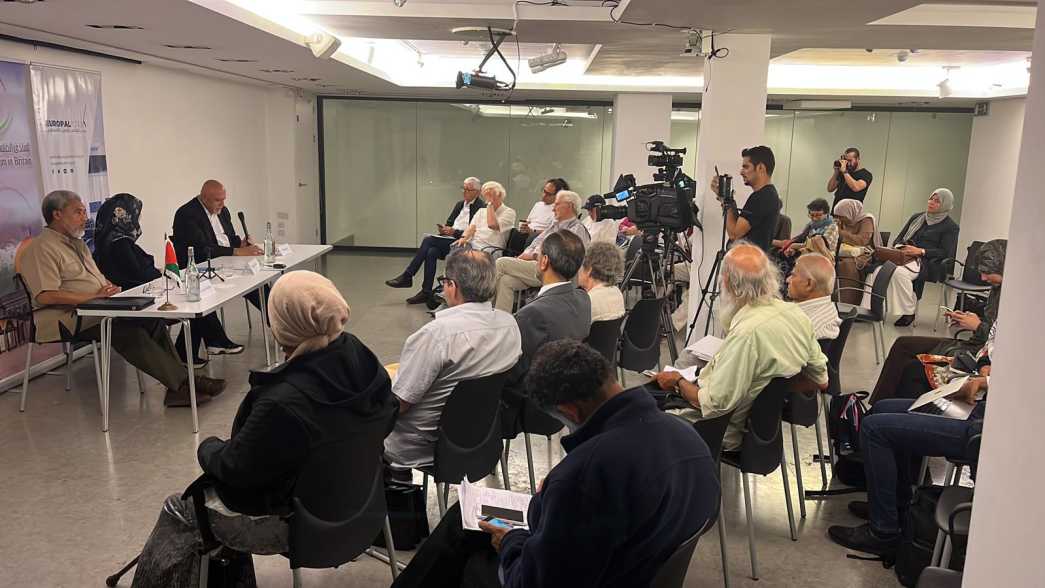 A group that organises popular anti-Israel demonstrations has attacked interfaith dialogue, claiming it is a covert Zionist strategy to cover up Israeli “apartheid”, the JC has learned.

PFB launched its campaign at a meeting at a London art gallery on 16 June under the title “How interfaith groups are being used to normalise Israeli apartheid”.

In a video of the meeting, Daud Abdullah, director of the news website Middle East Monitor and the former deputy chairman of the Muslim Council of Britain, is seen warning of “the misuse of interfaith dialogue to cover-up the crimes committed against the Palestinian people”. He claimed that such dialogue was favoured by “rich Jewish philanthropists” to “influence opinion in the Muslim community” and blunt its opposition to Israel.

He claimed this was “the source of many Israeli actions”, because it meant Jews “think they are the chosen people, they think they have the right to attack other people, to deceive other people, to rob other people”.
His words were not challenged. Another speaker asked how the “trap” of attending interfaith sessions in synagogues could be avoided. And Rifat Odeh Kassis, a prominent Palestinian advocate and writer, said that the only acceptable interfaith events would be those that were “resistance-orientated”.

Marc Goldberg, Head of Investigations at the Community Security Trust (CST), said the event was part of a growing effort to undermine the interfaith movement, which is supported by many Jewish and Muslim leaders to foster mutual understanding.

In 2020, the then-Bristol University professor David Miller — since sacked for suggesting that Jewish students were agents of a foreign power — criticised Jews making chicken soup for the East London Mosque.

It was an example of how interfaith could be “exploited” to “normalise Zionism”, he claimed.
Attempts to delegitimise such dialogue had been gathering momentum for years, Mr Goldberg said.

In 2018, the pro-Iranian Islamic Commission on Human Rights (IHRC) claimed interfaith involved Jews “cosying up to mosques and Muslim groups” and was “nothing more than a deceitful attempt to normalise the continuing murder, maiming and dispossession of the Palestinian people”.

In May 2019, a talk by Rabbi Lea Mühlstein at the Mahfil Ali Mosque in Harrow was cancelled after claims she was “heavily involved in Zionist activities”, Mr Goldberg said.
Fiyaz Mughal, a co-founder of both Muslims Against Antisemitism and the interfaith network Faith Matters, told the JC that he found the claims made at the PFB meeting “disgusting”.

He said: “Those who seek to smear, falsify and undermine interfaith work do not understand what binds our communities together, and their malicious attempt to politicise this must be rejected.”

Rabbi David Mason of Muswell Hill synagogue, a leading proponent of interfaith activity, told the JC: “I’m proud we have built positive relationships with Muslim communities in my borough and across London.

“Although differences will always occur, be working together we create friendships and model a better society.

“The idea that such positive interfaith work is a Zionist plot grotesquely misses the point of our achievements.”