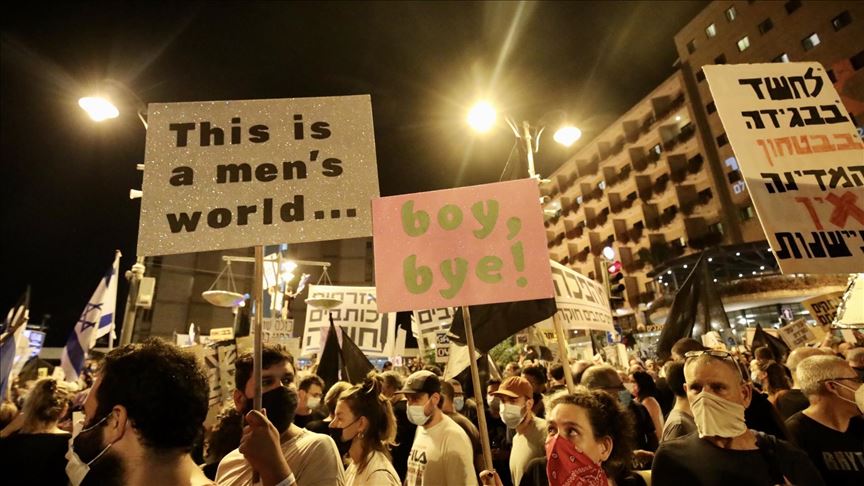 The Oxford dictionary definition of frenzy states “a period of uncontrolled excitement or wild behaviour.”

Here in Israel, we seem to be experiencing an endless period of such manifestations. It is not only on the local scene but also erupting internationally.

The basic cause can be traced back to the results of the 1 November 2022 general elections, which resulted in a fairly decisive defeat for the self-proclaimed champions of democratic values and liberalism.

Interestingly, although the defeated coalition consisted of at least one post-Zionist party espousing extreme left-wing views, nobody, either in the media or international forums, used the words ultra-left or extremist. Likewise, the Arab party in the coalition was never called out by commentators or the media for more or less managing to hide its ambivalent attitude towards Islamic terror. The so-called centre parties did a wonderful balancing act of trying to appease those spreading lies and fables about Israel and kowtowing to the United Nations’ endless condemnations. Rhetoric was never in short supply, but when it came to actually making the offenders pay for their actions, there was a distinct lack of a sustained counterattack.

It is vital to remember this because if one is to believe the overblown headlines and frenzied comments of all and sundry since the election results were announced, one would think that a coup d’état has taken place. That is precisely the expression being bandied about by those about to see many of their sacred cows sacrificed.

Obviously, in the distorted thinking of those who proclaim themselves “enlightened, liberal and democratic,” all voters and parties to the right of centre must, by their definition, be fascistic, ultra and extremist.

In addition, anyone who refuses to subscribe to the latest woke political thought beliefs must be a bigot and beyond redemption. Add to the mix an increasing number of voters who believe that we are here because of our religious and historical heritage, and you have the perfect answer as to why the current frenzy has become a veritable apocalyptic storm.

When the leaders of the righteous left give vent to their frustrations by whipping up the masses with bombastic outbursts, it is only natural that their followers will likewise erupt with full fury. In a democracy, opposition voices can and indeed must be heard, but when they descend to rabble-rousing, red lines are crossed. Threats of civil warfare and other inflammatory threats are apparently acceptable if they emanate from the “enlightened left” but are threats to democratic values if they are uttered by the “ultras” of the right.

When a former Prime Minister and millionaire leader of the socialist workers’ Labour party can spout drivel such as “this Government is legal but clearly illegitimate” and “street battles must oust the Prime Minister”, you know that irrational lunacy has supplanted common sense. The deafening silence of much of the media and the “liberal defenders of democracy” in the face of this incitement highlight the glaring double standards now prevailing.

At demonstrations, the black flags of anarchy and the terror flags of the Palestinian Authority can be seen, which just about sums up where many of these protesters are coming from.

JNS reported that the New Israel Fund had admitted financing anti-Government protests in Israel, which should not come as any surprise given their past funding of various extreme leftist groups. No doubt, various other European NGOs are also involved in helping to stir the pot against Israel’s democratic Government.

It is no wonder, therefore, that given all this domestic frenzy, international organisations and nations genetically opposed to Israel’s continued presence in the region have jumped on the bandwagon.

After all, if post-Zionist media outlets in Zion that print and post daily diatribes against the country’s Jewish ethos and excuse each and every outrage perpetrated by terror facilitators can blacken the country, then why can’t the UN and others do the same? I am not sure in these days of woke correctness whether one can still use the expression “blacken”, but no doubt you get the drift.

It was reported by the Times of Israel that the Principal of Israel’s most prestigious secular high school had some time ago stopped pupils from going on State-sponsored visits to Auschwitz. His reason for doing so was because “these trips contribute to the process of fascisization taking over politics in Israel.” To put it simply, his opposition is really a result of pupils returning from Poland with a heightened sense of Israeli and Jewish national consciousness and identity. Seeing first-hand what Germans and their willing partners did to defenceless Jews in the Diaspora has the effect of strengthening Israeli youth in their determination to not allow the same fate to befall their families. This, in turn, can result in some questioning the policy of submission to those who incite and carry out terror acts in Israel.

In the eyes of those who promote extreme leftist policies of appeasement and belittle the religious and historical connection of Jews to this Land the strengthening of any national pride is fascist. Past Israeli Ministers of far-left parties espoused the same sort of opposition to these visits to Auschwitz.

Coincidentally in the international media, taking their lead no doubt from our own flagellating groups, various commentators and so-called experts warn about the rising tide of “aggressive nationalism”, which is posing a peril. In today’s politically correct climate, this means that Zionism which is the movement of Jewish nationalism is by direct inference a threat to world peace. Israelis who demonstrate their patriotism either by voting for nationalist parties or merely by expressing their belief in the necessity for a strong State are therefore condemned. This explains why Israel as the resurrected national nation of the Jewish People, is the target of universal disdain.

At the end of December, the UN General Assembly voted at the behest of the PA to refer Israel to the International Court of Justice at The Hague. Safe in the knowledge that any condemnation of Israel can garner an automatic majority, this latest diplomatic terror tactic is a safe bet as far as Abbas is concerned.

When the previous coalition was in power, the worst that could be expected would have been worthless expressions of outrage followed by Abbas visiting Defence Minister Gantz at his home, where following a cup of tea, all would be back to normal again. After all, as stated by leading members of the past Government, Abbas is our only hope as a peace partner.

This time, however, much to the consternation of the PA and its fellow travellers, the newly installed right-wing coalition reacted in a totally different manner.

Instead of a verbal slap on the wrist and then business as usual, the consequences are far more serious.

Instead of transferring tax money to the PA so that they can continue to pay terrorists for slaying Israelis, the relevant amount has been withheld and redirected to victims of Palestinian terror. Finally, and long overdue, there is a financial penalty for the PA’s ongoing campaign of physical and diplomatic terror.

The next step has been the cancellation of VIP passes for PA officials, which enable them to enter Israel automatically without having to stand in line like everyone else.

Also belatedly, but better late than never, is the clamp down on illegal building in Area C of Judea and Samaria. Financed and facilitated by the EU, this illegal construction has been ignored for far too long.

As anticipated, these measures have unleashed a frenzy of agitated horror from all and sundry. The prospect of an Israeli Government actually taking steps to defend its sovereignty and punishing those waging war against it is anathema. That is why from so-called friends and well-known foes alike, the condemnations have been pouring forth. Apparently, over 90 countries have supported a demand by the PA to force Israel to rescind these sanctions.

Commendably Australia is not among these appeasers. Unsurprisingly, New Zealand, after having abstained on the original UN resolution to refer Israel to the ICJ, has added its name to those countries demanding Israel immediately cancel its penalties. No doubt having been criticised for abstaining in the first place, the NZ Foreign Ministry felt it had to condemn Israel, and thus it jumped on the bandwagon.

An example of how deranged some frustrated leftists have become is the case of a Tel Aviv owner of a restaurant that has kosher certification. In protest at her favourite left-wing party having lost the election, she has now decided to cancel the kosher status of her establishment and presumably now serve up “glat treif” instead.

In the face of this domestic and international insanity, it is time to stand strong and act accordingly.