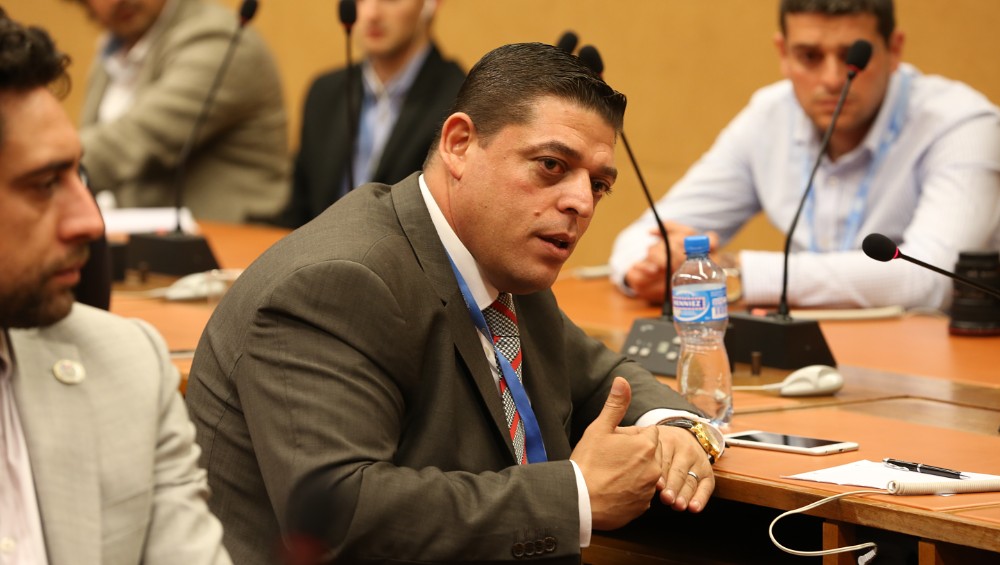 On 17 September Loai Deeb must appear in Stavanger District Court. The Norwegian-Palestinian is charged with having misappropriated and laundered NOK 10 million from his own human rights organisation, which is now bankrupt.

The stakes are high for the former newspaper carrier with a fairy tale career path. In just a few years he built up a human rights organisation with global reach from his head office in Stavanger. At its height the Global Network for Rights and Development (GNRD) had 140 employees and offices in seven countries. From delivering newspapers in Jæren, the Palestinian refugee went on to earn millions in income and become institution president.

Despite accusations to the contrary, the Stavanger man has persistently claimed that the GNRD was neutral and impartial. But today NRK can reveal that in its early years the Norwegian organisation, which was dedicated to human rights and development, had close ties to Palestinian intelligence.

NRK has gained access to previously unpublished documents that show that Loai Deeb was furnished with a Palestinian diplomatic passport. Also, in an internal document, a Palestinian intelligence officer is registered as a board member of the GNRD. The organisation also received money from Palestinian National Authority officials.

A source in the Palestinian intelligence service explains the motivation behind the support for the GNRD like this:

– We did it to combat the Israeli occupation of Palestine. We needed a voice and a large organisation that could give us power in the UN and in the international arena, the person told NRK.

Palestinian officials will not comment on the matter. NRK has presented all gathered information to Loai Deeb. He writes in an e-mail that the all of the information presented by NRK is untrue.

Loai Deeb came to Norway in 2001, as a Palestinian refugee. He is a Norwegian citizen, but according to information obtained by NRK, he has for several years been in possession of a Palestinian diplomatic passport.

This type of Palestinian passport is usually reserved for diplomats and high-ranking civil servants. It is not as exclusive as other types of diplomatic passports, but grants greater freedom of movement in the Middle East than a standard Palestinian passport.

– Do I have a Palestinian diplomatic passport? From where am I supposed to have gotten that?

– Do you have such a passport or not?

– According to the passport number this is Loai Deeb. He is a diplomat, the person says.

However, something about the passport gives the directorate representative reason to pause. There is no information about who has requested that this passport be issued.

– That is odd … How has this happened? There is no basis for him to have received a diplomatic passport, the employee says, and promises to investigate the matter.

Later the directorate employee gets back in touch with NRK.

– The passport has expired. I have not been able to find out how he has acquired it, but we will not be renewing his passport, the employee says.

A source in Palestinian intelligence says that they were behind the issuing of the passport.

In 2012 local websites in the Palestinian territories reported that Palestinian intelligence was supposed to have struck a deal with the GNRD. According to the articles, including one in the Jerusalem Post, the agreement was that intelligence would finance the organisation’s start-up. Palestinian National Authority officials have denied that such a deal was made. Deeb also denies this to NRK.

NRK has gained access to a statement from the organisation’s account with a Swiss bank. This shows that the GNRD had CHF 124,270 in its account in November 2011. This was equivalent at the time to just under NOK 800,000.

The GNRD’s treasurer, Didier Barthe from Switzerland, established the account. He tells NRK that representatives for a Palestinian authority came to Geneva to discuss the financing of the organisation’s office in Switzerland.

– I know that this money came from Palestine. We received money once or twice, then it stopped, Barthe says of the bank statement. He says the money came from the authorities, but he was not told from which.

– I do not know which public authority it came from. Everything was discussed in Arabic, and I was not part of the discussion, Barthe says.

At this time Loai Deeb was president of the GNRD, and for its operation in Switzerland, which was in its initial phase. Deeb says to NRK that he has no knowledge of the money.

In the same year, 2011, Palestinian intelligence makes an appearance in the organisation’s board documents.

The GNRD was registered in Norway in 2010. The organisation had two administrative boards, one in Norway and an international board in Switzerland. In the following year another board was established in Switzerland, this one being called the executive committee (comité exécutif).

NRK has now acquired access to an internal document belonging to the organisation. The document is composed of the names and signatures of the members of the executive board. At the bottom of the document there is one remarkable name. It belongs to a Palestinian intelligence officer. The officer has confirmed his membership in the executive committee with this signature.

At this point in time the intelligence officer was highly placed in the division for foreign intelligence on the West Bank. This has been confirmed by several sources, verbally and in writing. This signature means he was simultaneously a committee member of what was supposed to be a neutral human rights organisation.

NRK has requested an interview with the intelligence officer, but this enquiry has been refused.

Deeb: – None of this is true

In 2013 the GNRD went through a period of change and upheaval. The Norwegian human rights organisation received large donations from sources in the United Arab Emirates, and experienced major growth. Three companies in the Emirates were behind the largest contributions. According to a report from the bankruptcy estate, the organisation received NOK 114 million in donations from 2013 to 2015. At the same time, a large part of the board was replaced.

The donations from the gulf would eventually turn out to lead to the fall of the GNRD. The Norwegian Economic Crime Unit (Økokrim) suspected that the funds were of illegal origin. In May 2015 police charged the GNRD and Loai Deeb with money laundering. At this point the influx of funds came to a halt.

Despite a long investigation, Økokrim has been unable to discover who in the Emirates was behind the donations. In May the charges against the GNRD were dropped. In September Loai Deeb must appear in Stavanger District Court, charged with embezzlement, money laundering, violating the Immigration Act and Norwegian Customs Act, perjury and forgery.

NRK has presented all of its information on the case to Loai Deeb. He has also seen the printout from the passport registry and the GNRD bank statement. Loai Deeb does not wish to be interviewed, but writes in an email to NRK:

– None of this is true, and I will not comment on absurdities.

Loai Deeb’s legal counsel, Kjell Brygfjeld from the law firm Endresen Brygfjeld Torall in Stavanger, has told NRK that he does not wish to be interviewed by NRK.

NRK has spoken on several occasions with Nabil Abu Rudeinah, the spokesman for President Mahmoud Abbas, but he no longer replies to NRK’s communications. A spokesman for the Foreign Department in Ramallah told NRK that the Palestinian authorities have no comment. Ambassador Amro al Hourani at the Palestinian embassy in Norway does not wish to be interviewed on the matter.