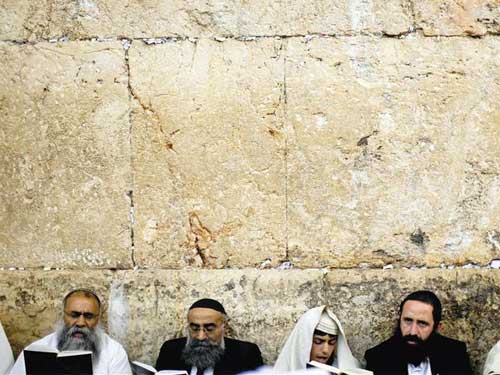 If money could buy peace, this would be a golden era for Middle East peacemaking. Notwithstanding activists’ much-hyped “boycott, divestment and sanctions” campaign, Israel’s economy is booming: Growth last year was 4.5% (despite a maximum marginal tax rate of 60% – please explain that, AIPAC/ Tea-Party supply-siders). And growth in the Palestinian West Bank (which, unlike Gaza, is ruled by Fatah, not Hamas) is even higher. Here in Ramallah, construction seems to be taking place on every block – not the slapdash Arab McMansions you can see from Israeli highways, but proper office buildings, stores and apartments. The downtown sidewalks are so thronged that shoppers have to dodge cars on the street to get from store to store. Arab Jerusalemites and British Arabs come here for parties and fancy weddings. At a local museum, a major Picasso exhibition has opened up.

Money is pouring in from NGOs and relatives in the West, with a healthy dose of local grassroots private investment as well. The Westerntrained police strut about with polish and confidence. Scarred by the example of Gaza, where Fatah activists were rounded up and killed by Hamas, Palestinian Authority (PA) security forces have made common cause with Israel (whose military presence here is non-existent – at least during the day) in eradicating Hamas from public life.

The international community, enchanted by pro-Western PM Salam Fayyad, has noticed: Earlier this year, the IMF and World Bank jointly declared that the West Bank, under its current moderate leadership, has all the financial tools needed to form a sovereign state – a testimonial that will be trumpeted when and if President Mahmoud Abbas unilaterally petitions the United Nations for statehood in September. Fayyad has called the World Bank/IMF declarations the “birth certificate” of a future Palestinian state.

Yet on the ground in Ramallah, the economic boom is being greeted with studied joylessness. None of the Palestinians whom I interviewed last week – even the PA officials who take credit for recent improvements – describe the betterment of life here as much more than a means toward a larger end. In fact, they seem wary of expressing any satisfaction at all. “For us, the important thing is that the improved economy moves us toward the goal of ending the occupation and achieving self-determination and freedom,” the PA’s bookish media director, Ghassan Khatib, told me. “For Israeli PM [Benjamin] Netanyahu, on the other hand, the improvements are a way to prolong the occupation. This is not a new Israeli strategy. They call it ‘Fill their stomachs.’ This strategy hasn’t changed.”

What has changed, Khatib tells me, are the Palestinians’ own tactics for thwarting Israeli occupation. Like everyone else I speak to in Ramallah, he is careful to pay homage to those “martyrs” who engaged in “legitimate armed struggle” during the second Intifada. (Attacking military targets was legitimate, he explains. Blowing up school buses was not.) But he also tells me that violence has been a dead end for the Palestinians: “The experience of 2000-2003 was very costly for us. Violence is to Israel’s advantage. It is not wise for us to be dragged into Israel’s area of strength.”

I got the same sort of response from an Islamist legislator – a man previously affiliated with Hamas who has spent several years in Israeli jails. “Who likes suffering?” he said. “We reject violence. It’s the other side that doesn’t.”

Ordinary Palestinians still seethe with all the same complaints they had the last time I visited the West Bank, when the security fence was first going up. That structure – the apartheid wall, as some prefer to call it – is an especially large irritant. There is no doubt that it has had an enormous effect on reducing terrorist infiltration into Israel – even many Palestinians will admit this. But the optics of it, especially the concrete guard towers at critical junctures, are colonial. And the fact that Israel keeps expanding settlements, even as it’s blaming the Palestinians for undermining peace talks, obviously doesn’t help.

An Arab driver who took me around the area could barely contain her anger as she showed me Palestinian farmlands chopped up by the fence, alongside modern access roads reserved for the use of settlers. When an Israeli soldier speaking Americanaccented English turned us back at a checkpoint, my driver began venting so passionately that I thought she was going to drive us into a ditch. If Netanyahu is serious about making peace – a big if to be sure – removing, or at least minimizing, such indignities would be a good place to start.

How do things move forward on the Palestinian side? Some Western pro-Israeli groups are urging Palestinian leaders to begin with a simple symbolic step: acknowledging Israel’s Jewish character. In a widely promoted article reprinted in the National Post, for instance, the Simon Wiesenthal Center announced a “six words” campaign centred on the slogan “I will accept a Jewish state.”

The message seems eminently reasonable in Israel and the West. But when I put the proposition to people in Ramallah, I couldn’t find anyone who’d agree.

“That’s stupid!” bluntly declares Mahmoud Labadi, a charismatic, oldguard PA apparatchik. “Why doesn’t Canada declare itself a Christian state? Why doesn’t the United States declare itself a WASP state? Why? Look at the United States and Canada, with all cultures and religions and races side by side.. To exclude all other religions and cultures and minorities – as a Canadian, how can you accept that? It’s a racist argument. It’s like me declaring Palestine as a Muslim state. This is a twisted logic. It’s evil.”

Then, he launched himself into the realm of fantasy by claiming that the entire Jewish historical claim to Jerusalem’s core is bogus, because no Jewish temple ever existed in the area.

Palestinian leaders have fallen back on this insulting conspiracy theory for years. It’s become part of Fatah lore. But this was the first time I’d been assailed by it in person, and I was somewhat shocked by the experience.

“This temple – I will tell you frankly, this is not a Jewish temple,” he went on. “This is a myth. This was a palace – a palace where David and Solomon lived. [The Jews] are looking everywhere in [Jerusalem’s Old City] to find some traces. Until now, 43 years of occupation, they couldn’t find any real trace of any kind of temple. It’s mythology they build in their heads. You know what I say – I’ve told this to some Jewish counterparts – pick the highest mountain in Jerusalem and build your [new] temple there.” (Remaining firmly in the sphere of conspiracy theory, Labadi then rehashed the debunked claim that Israeli archeologists are plotting to destroy the Dome of the Rock, which sits on the Temple Mount.)

As with all backward-looking conspiracy theories, this one is being used to advance a forward-looking agenda – which is to strip Israel of its historical identity as the homeland for the Jewish people. As Yasser Arafat himself understood when he first blindsided Israeli and American peace negotiators with his crackpot history, an Israel disconnected from Jewish history wouldn’t have any basis to reject the “right of return” claimed by the descendants of 1948-era Palestinian refugees, nor the collective solidarity necessary to continue the exhausting fight against its Arab neighbours.

In the 1990s, following Oslo, there was a significant number of secular, left-wing Israelis who bought into this de-Judeified post-Zionist vision of their country. It truly was imagined that, in the New Middle East that was supposed to materialize, Israel could flourish as an indeterminate mish-mash of Jews and Arabs. Then came the second intifada, the weekly suicide bombings, the blood libel of Jenin, Der Stürmer-style cartoons in European newspapers, threats of nuclear extermination by Holocaustdenying Iranian leaders, the Lebanon war, the Gaza campaign, the ongoing parade of bigotry at the UN Human Rights Council, the Goldstone report and a campaign by flotilla peaceniks who ignore every other humanitarian situation in the world except the kind involving Jews. The overall effect of this decade of Israel-directed hatred, some of it bleeding into real anti-Semitism, was to remind Israelis why their country was founded in the first place, thereby re-invigorating its specifically Jewish sense of mission.

I don’t think it’s a coincidence that Israelis’ interest in the Nazi Holocaust has been expanding enormously during this period. In recent days, I have been attending lectures at the Yad Vashem Holocaust museum and research facility in Jerusalem as a guest of the Canadian Society for Yad Vashem. It’s a place that Elie Wiesel once described as “the heart and soul of Jewish memory,” and after my week here, I can see why.

Israel wasn’t created because of the Holocaust, as often is claimed; and, pace Jenny Peto, Holocaust education shouldn’t be mistaken for Zionist propaganda. But the Holocaust did represent the flesh-andfire manifestation of the murderous hatred that made a protective homeland a historical necessity. And none of it feels like ancient history: In Yad Vashem’s very first exhibit hall, one encounters Nazi propaganda posters whose imagery regularly has been copied by the anti-Semitic cartoons published in modern Arab newspapers. Even in the West, Nazi-style anti-Semitic tropes have made their way into public debate. A few weeks ago, for instance, UN human-rights rapporteur Richard Falk published a cartoon featuring a Jewish dog feasting on Palestinian blood.

Yad Vashem has become almost “too popular,” its chairman told me. Many Israeli teenagers, anxious to understand the experience of aging grandparents, have became fixated on the subject. During my own visit, I fought for space among the exhibits with hordes of foreign and Israeli visitors. A massive conference that drew 1,200 school teachers was underway. All of them had come on their own dime. About 70,000 uniformed members of the Israeli military also come every year.

Israeli Jews’ effort to reconnect with their own history provides evidence that the international effort to delegitimize and intimidate Israel has backfired. On the other hand, in the shadow of my Ramallah interviews, it also served to demonstrate just how large is the gulf between Israeli and Palestinian expectations about the sort of Israeli state that will emerge from any peace process.

For Jews, Israel is, and will remain, a homeland for their own kind, including those escaping hate and persecution. Most Palestinians, on the other hand – even those advocating peace – imagine that Israel’s basic historical and demographic identity is still up for grabs: something that can be manipulated with birth rates and activism, if not outright violence.

Perhaps if Palestinian leaders spent more effort understanding Jewish history than denying it, that gulf might be diminished. For Palestinian leaders, the road map to peace will begin, many years from now I imagine, at the gates to Yad Vashem.

— Jonathan Kay is Managing Editor for Comment at the National Post, and a fellow at the Foundation for Defense of Democracies in Washington, D.C.