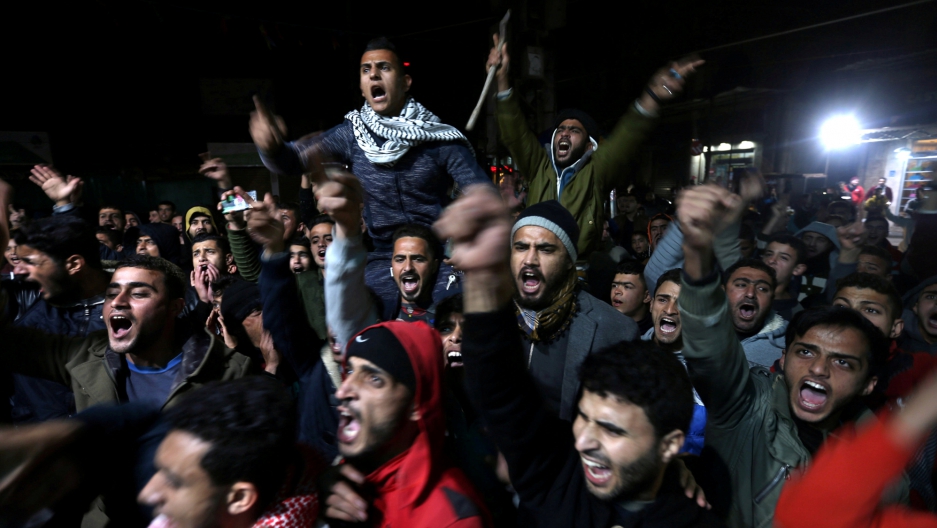 The Palestinians’ threats of a new wave of violence prove again that the “spontaneous popular protest” are pre-planned actions by the senior echelon of the Palestinian leadership.

U.S. President Donald Trump’s decision to recognize Jerusalem as the capital of Israel and to transfer the American Embassy from Tel Aviv to Jerusalem has been met with Palestinian threats of violence.1

The American administration’s intent to change the status of Jerusalem motivated the Palestinians to carry out a comprehensive diplomatic counterattack. The following are the main lines of Palestinian actions:

Diplomacy: The Palestinian Authority (representing Fatah) and the Hamas movement launched diplomatic activities to convene an Arab/Islamic conference to discuss the status of Jerusalem and motivate the Arab League and influential countries, such as Turkey, to dissuade the United States from taking its planned action. While Fatah and Hamas publicly declare their commitment towards national reconciliation and to partnership in decision-making, in practice the bitter rivalry between them, based on the struggle for control of the PLO and the representation of the Palestinian people, continues.

Demonstration of Hamas Rule in the Gaza Strip: On December 4, 2017, Hamas leader Ismail Haniyeh convened the leaders of the Palestinian organizations in the Hamas offices in Gaza to discuss “threats” against Jerusalem; later they met with a Egyptian security delegation.2  The meeting, which was also attended by the Hamas leader, reflects the de facto control of Hamas in the Gaza Strip and demonstrates that the transfer of authority to the Palestinian Authority within the framework of the reconciliation initiative is only superficial.

Threatening a New Outbreak of Violence, Days of Rage – The Hamas newspaper Felesteen reported on December 4, 2017, that Hamas and the Palestinian Authority had agreed on the need for mass protest activities throughout the territories in response to the American move.3 Senior officials in the Palestinian Authority and Hamas have openly warned of undermining the stability in the territories and the entire Middle East. These warnings translate to acts of violence and terror directed against Israeli, Western, and American targets.4 These current threats show once more that the “spontaneous popular protests” emerge from pre-planning by the senior echelons of the Palestinian leadership.

A Sense of Accomplishment and Power – Any delay of the American decision on Jerusalem will strengthen the Palestinian (and Arab) leadership’s view that the Trump administration is limited in its ability to exert effective pressure on the Palestinians because of their “deterrent power” of violence and terror that will undermine regional stability. The Palestinian Authority has already indicated that it will respond to the anticipated announcement by President Donald Trump by initiating a new wave of violence, refusing to accept the U.S. as a honest and unbiased broker in the peace process and hardening the Palestinian positions in future talks.