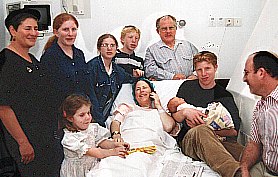 Sara Bedein gave birth on 17th September, 1999 to yet another gingy, Rehuma Leah, a bouncing buttercheeks sister to Noam, Rivka, Elchanon, Leora, and Meira, and intends to ring her as yet another settler to live at 9 Lotam Street in the Old City of Efrat just after Yom Kippur.

This provacative act of settler expansion caused the immediate emergency session of the UN insecurity council and the US National Security Council, chaired by Sandy Burger-king, whose namesake just withdrew its buns from the vest bank in anger. Dennis Rust, firing off a hasty telegram to Yossi Saris and Shulamit Baloney of the Sheretz party, demanded that conduminimums be immediately erected for the unsettled settlers of Efrat, and that David Bedein be sent for immediate counsel at Clinika Off.

Reached for comment at Daf Yummy, David Bedein claimed that he only found out about the pregnancy via the internet nine months ago, and had the baby changed from boy to girl so that he would not have to call up the “e-moyel” for a cut of the profits on the net. Rabbi Risk would have made the unkindest cut of all. Asked about possibilities of artificial insemination through the internet, people were heard to be singing “semen, semen tov, and mazel, mazel tov” in schules throughout Efrat upon hearing the news.

In a statement from the Vite House, it was announced that US Secretary of state Madalyn unBright would immediately dispatch special US presidential birthcontrol envoy Monica Leudinsky to help settlers practice on bypass routes so as to unsettle their sexual driving habits so that they may conduct safe conjugal encounters that will not produce any more such unexpected gingy additions to their illegal expansions in Judea.

End of Release
we hope