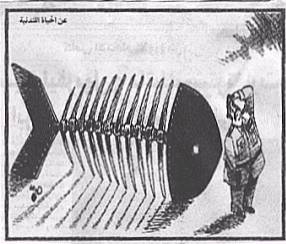 The Palestinian Authority, taking a lesson from authoritarian regimes, uses its media to mobilize support for the ruling class and its war against Israel. Since 1994, PA Chairman Yasser Arafat has increasingly controlled the media by establishing newspapers directly owned by the authority, while banning of independent news organizations. [1]

The PA control of the media has become absolute, especially since the escalation of the war with Israel in September 2000. PA security officers control the Arab Journalists Association and the Palestinian Journalists Syndicate. The security agencies approve the appointment of editors for all newspapers. Independent-minded journalists have either been jailed or dismissed from their posts. [2]

The regime has imposed conformity in all licensed media that resembles the practice in such countries as Egypt and Syria. [3]

The result is that the PA uses its official newspapers, radio and television to mobilize support for the war against Israel. And over the last few months, the Arafat regime has also used the official PA media to become advocates of Iraq. Newspapers have replaced front-page headlines that focused on the Israeli-Palestinian conflict with reports on the U.S. military buildup against Iraq. Iraqi soldiers killed in engagements during U.S. and British patrols of the no-fly zones are now described as “martyrs.” PA television broadcasts sermons by PA-employed clerics that proclaim prayers for the destruction of the United States. [4]

The shift is even more pronounced on the editorial pages of the Palestinian dailies. Columnists and editorial writers have focused increasingly on Iraq and what they term the U.S. strategy to dominate the Arab world. Cartoons are published that portray the United States as a world bully whose latest victim is Iraq.

Many newspapers in the Arab world supported Iraq during its confrontation with the international community over Baghdad’s weapons of mass destruction. But nowhere in the Arab world has that support been more pronounced than in the official PA media. While other Arab regimes reluctantly supported Iraq as a sop to their opposition, the Arafat regime mobilized for Baghdad because of Arafat’s personal relations with Saddam Hussein. The genesis of that relationship was spawn in the 1970s and have continued since as Saddam has poured in tens of millions of dollars to help sustain the PA war against Israel. [5]

The result has been massive demonstrations in support of Saddam, engineered both by the dominant Fatah movement and the opposition Hamas. At these demonstrations, organizers lead chants for Saddam to destroy Tel Aviv with missiles and to fire weapons of mass destruction at U.S. troops. As a matter of ritual, the British, Israeli and U.S. flags are burned. The Palestinian Authority has allowed these demonstrations to occur.
The PA Dailies

There are three Arabic-language dailies operating in the West Bank and Gaza Strip. Two of them are directly owned by the Palestinian Authority. The third is partly owned by Arafat and controlled by his regime.

Al Quds:
Based in Jerusalem and the largest daily in the Palestinian areas with a circulation of 25,000. The newspaper was established by pro-Jordanian Palestinians in 1951. It is published by Mahmoud Abu Zuluf. It underwent a period of official domination in the early days of the PA and has now conformed completely to the regime’s line.

Al Ayyam:
Based in the West Bank city of Ramallah and published by Akram Haniyeh, a longtime aide of Arafat. The newspaper, founded after the PA was established in 1994, is regarded as the official daily of the regime and in the 1990s was used to float trial balloons regarding new policies and appointments.

Al Hayat Al Jedida:
Based in Ramallah and the smallest of the three dailies. The newspaper reflects the revolutionary principles of the Fatah movement and is by far the most strident of the dailies. The newspaper, established in 1995, is directly financed by Arafat. The names of the editors and founders, Hafez Barghouti and Nabil Amr, no longer appear in the newspaper in a demonstration of dissatisfaction by Arafat.

These newspapers have been used to villify the United States and its allies. The PA has encouraged Palestinian journalists to write stories that threaten Israeli journalists, who have sought protection from potential attacks. In December 2002, the Arafat-controlled Al Aqsa Martyrs Brigade began to intercept phone conversations of at least one Israeli journalist and to send transcripts to an unspecified location abroad. [6]

The PA support for Saddam can be most graphically illustrated in the daily cartoons in Palestinian dailies. Most of the cartoons are taken from newspapers in surrounding Arab states

The cartoons portray the United States, and particularly President George Bush, as the bully of the world. The U.S. target, the cartoons assert, is the Arab world, which is helpless to defend against itself.

We have divided the cartoons into the following categories:

The cartoons were taken from PA dailies in December 2002, and January/February 2003.

A. Iraq as a Paper Tiger

PA newspaper cartoons rarely show Palestinian Saddam Hussein. Instead, the PA newspapers portray Iraq as a frail man or woman, helpless in the face of U.S. brutality. Iraq is often seen as the last bastion of Arab independence or a power completely stripped of military might. The cartoons show Iraq as honoring the international community’s will regarding inspections and sanctions. Indeed, Iraq is usually seen holding a dove of peace and an olive branch of reconciliation. But Iraq is always a victim, never able to satisfy U.S. demands. Iraq has nothing left of its missile arsenal to stop invading U.S. aircraft. Iraq, surrounded by sharks, is portrayed as last bastion of Arabism. Iraq is pulled apart by two factions in the United Nations. U.S. uses Islamic world to slaughter Iraq as it is being held by UN inspectors.

Everybody wants a piece of Iraq. Iraq offers an olive branch to the U.S.