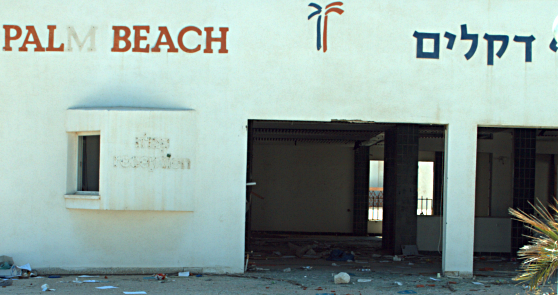 The demonisation of the residents of Maoz Yam, the Gush Katif hotel, has continued in the Israeli press for the past two weeks.

A side of the story not reported in the media was an event, the first of what was planned to many cultural evenings for the residents of Gush Katif, two nights before the Israeli government ordered all residents evicted.

Last Tuesday evening a wine and cheese night accompanied opening of my one man photography exhibition, “Actualities in Black & Orange”.

The idea for the evening grew out of my visit to Kfar Yam last week, to the homes of Nadia Matar and Anita Finkelstein. They, together with long time Kfar Yam resident Datya Yitzchaki, founded Minhelet Kela, an organization to encourage and assist people to move to Gush Katif at this time. The aim of the evening was to allow the veteran residents of Gush Katif and the newcomers to meet, to break down barriers that may have arisen due to the negative press. People from other areas of Israel were invited to meet both groups and see the hotel first hand.

I arrived early, around noon. The gates of the hotel were surrounded by an aggressive press corps. One cameraman had built himself a platform to allow him to film over the wall; the road was all but blocked by a satellite dish around which I maneuvered with difficulty — a rumor was circulating that the police were about to raid the premises. When this proved not to be the case, the press quickly and quietly dispersed.

Inside the hotel complex I found everything to very calm and relaxed. In the newly built synagogue, a group were in the middle of a Talmud lesson, in the dining hall, tables were being laid out for lunch and others were busy in the kitchen preparing the food. Still others were cleaning the public areas and planting trees in the grounds. Visitors from all around Israel were coming and going throughout the day. I didn’t find the radical image the media was presenting.

The only thing that was strange was that there were no windows in any of the buildings. Apparently a couple of years ago, these were smashed by out-of -the-area drug addicts who sold the aluminum frames for scrap. The glass and rubble had all been cleaned up now by the new residents, and a cool sea breeze blew in through the openings.

A number of volunteers helped me to prepare the venue for the exhibit. The hotel coffee shop was restored for the occasion, and Victor, who had been the old hotel’s chef, arranged the room and the food. There was a shortage of electricity in the hotel, but some lights were connected.

At 6:30 people started to arrive. The few fluorescent lighting tubes were augmented by the warm light of the sunset streaming through the large “windows” in the west. About 200 people attended the opening of the exhibition. Various companies from around Israel donated wine, cheese, fruit and other delicacies for the occasion. Both recorded and live music was played in the background. Newcomers, residents and visitors mixed freely. Everyone had a good time.

The ambiance was electrifying.

Eitan ben David, the owner of the hotel, was present. He publicly expressed his joy at seeing the hotel again “come to life”. The entertainment was reminiscent of summer evenings when the hotel was full of visitors.

One hotel resident, a tour guide, best summed up the evening. He said that whilst my photographs represented a certain surrealism in Israeli society today, reality was far more surrealistic. “Last night”, he continued, “we were building barricades as we were expecting the police to raid the hotel; and tonight I’m drinking wine and looking at fine art”.