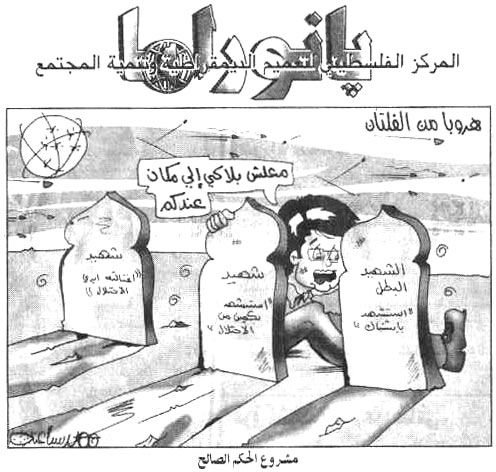 Palestinian Authority Chairman Mahmoud Abbas has agreed to a virtual Egyptian takeover of the Gaza Strip and has invited other Arab regimes to plant a stake in the West Bank. Abbas has become a bystander as Hamas and foreign governments take over the PA and assume control over institutions and even Palestinian cities. Abbas appears to be under the protection of Egypt and Saudi Arabia as even his closest allies, such as Mohammed Dahlan, have moved away. In wake of the Israeli withdrawal from the Gaza Strip, the power vacuum in the Palestinian areas is wider than ever. In some respects, the PA today resembles Afghanistan in the 1990s, an Islamic state dominated by terrorist groups and protected by neighboring Pakistan. One month after Israel’s withdrawal from the Gaza Strip, the Palestinian Authority has become weaker than ever. Salaries are being paid thanks to Western governments. But services are spotty, security is non-existent and corruption is rampant. The power vacuum begins at the top and PA Chairman Mahmoud Abbas and senior ministers have been marginalized. They are present at official ceremonies, particularly for foreign dignitaries, where the PA officials play a marginal role.

The Palestinian daily media no longer see Abbas and his senior ministers as important –either as representatives of the people or agents for change. Neither Abbas nor PA Prime Minister Ahmed Qurei is seen on the front pages of the three Palestinian dailies — normally censored and supervised by the PA — unless they are with foreign dignitaries. In many of these photographs, the foreigners rather than Abbas are the focus. [1] Even PA-owned dailies now ignore Abbas except when he meets leaders from such countries as Egypt and the United Arab Emirates.

What dominates the Palestinian press is the chaos and threats from armed Palestinian groups as well as the wish for foreign intervention. News and editorial coverage of the fighting between Palestinian militias and the PA have increased and the statements of Hamas and Islamic Jihad are being given greater prominence. A photograph of militia fighters raising their guns in a salute, with the names of their organizations in the background is more revealing of the Palestinian reality than the endless statements of Palestinian politicians. [2] Abbas no longer dominates the Palestinian agenda. Indeed, there are few statements from him and his Cabinet colleagues. Even Abbas’s powerful ally, Mohammed Dahlan is silent. Dahlan, regarded as the the Gaza Strip’s de facto security chief and heir to Abbas, has not given a public address in weeks, which has only led to rumors of his demise. The rumors have been so persistent that the Palestinian dailies have been allowed to publish denials of reports that Dahlan has died. [3]

The news item in the PA-owned Al Hayat Al Jadida –in a departure from the way the Arab press would address the issue –does not mince words. In a page one brief above the fold, the newspaper quotes sources in Dahlan’s office as denying reports that the civil affairs minister died. The report acknowledged that the rumors have reverberated throughout the Gaza Strip, but sources said they spoke to Dahlan and that he plans to return to the Gaza Strip by Oct. 15. The sources said Dahlan has completed an unidentified medical treatment.

Dahlan was seen by many as the last hope for a comeback by the PA and the ruling Fatah movement. With more than 2,000 well-trained and well-equipped Preventive Security Apparatus officers under his unofficial authority, Dahlan had been regarded as capable of imposing control over the Gaza Strip. But Dahlan has been incapacitated and the violence appears greater than ever. Palestinian newspapers are filled with accounts of shootouts around the Gaza Strip in what has been termed a “security and social chaos… where not a day passes without a shooting.” [4] These shootouts between Palestinian gangs take place on the streets, in markets and outside mosques throughout the area. Police do not intervene. PA pledges to end the internecine violence are no longer regarded as credible. Palestinian columnists discount the stream of assurances by Abbas that he would end the militias in the Gaza Strip and West Bank. They say the key to the imposition of order in the PA areas is Abbas’s pledge to seize illegal weapons. [5] So far, however, the PA has not taken such a step and analysts don’t envision this either. Indeed, a PA anti-crime crackdown in the southern West Bank was virtually ignored by the Palestinian press and treated as a publicity stunt. The PA-owned Al Ayyam ran a photograph of several commandos pointing their guns toward a storefront in the Hebron-area village of Yatta without an accompanying story. [6]

Instead, the Palestinian dailies have reported on demands by the Palestinian Legislative Council for a new government and the dismissal of all PA security chiefs. On Oct. 3, the PLC warned that Abbas would face a no-confidence vote unless he formed a new government within two weeks. A PLC report blamed Qurei and Interior Minister Nasser Yusef for failing to stop what has been termed the “armed chaos” in the PA. [7]

An Appeal for Foreign Intervention

Indeed, the Palestinian dailies have dismissed what had long been a focus of press coverage –PA talks with Israel. They regard the PA talks with Israel or the United States as important only as they influence the situation on the streets of the West Bank and Gaza Strip. Some analysts see the PA as disintegrating and appeal for a Palestinian or foreign partner that could save the situation. They say the PA priority requires the setting of a national agenda to prevent the spread of chaos and civil war. [8]

For many columnists, the last straw was the Sept. 23 Hamas parade in the Jabalya refugee camp north of Gaza City. At least 20 people were killed when Kassam-class missiles fell from a jeep and exploded. Hamas blamed Israel, but the PA Interior Ministry said the explosion stemmed from the Hamas missiles. As a result, columnists have urged Hamas to agree to principles that would prevent further bloodshed and the prospect of a civil war. [9]

Mohammed Shaker Abdallah, editorial page editor at Al Quds, outlined a set of principles that Hamas and other militias must agree to. They include a ban on violence as a means to settle disputes. Abdallah said only the PA security forces must carry and use weapons –“to prevent crimes, spread security, strengthen the power of law and protect the lives, properties and honor of the citizens all over the Palestinian territories –not for parading, bragging, intimidation or violating the law and public order.”

The second principle cited by Abdallah would ensure that all militias recognize the sole authority of the PA. No militia has the right to assume security responsibility in the PA. “No other party has the right to undertake these tasks on behalf of the official authority, or for the sake of competing with it,” he writes. “Should any faction seek to have a share in the legislative and executive bodies, the only open path to achieve this goal is to participate in the general elections and the balloting box. After winning a certain percentage of the votes, each faction could have the relevant portion of the political official positions. Elections have always been the credible criteria for dividing the shares of parties and factions in any acceptable democratic system.”

The columnist expressed what has been a reality in the Gaza Strip. Hamas has taken control over much of the area. Palestinian reports refer obliquely to the deployment of Hamas forces in the streets of towns and cities in the Gaza Strip. Virtually all of Gaza’s refugee camps have come under Hamas control.

Abdallah’s third principle was that Palestinian factions must be solely loyal to Palestine. Hamas and other Islamic groups must derive their authority from the Palestinian people rather than from foreign countries or organizations. “This national loyalty must surmount any limited belonging, for it is the only solid foundation that helps the emergence of independent states, stabilizing them and cementing the connections between all citizens,” Abdallah writes. “Hence, the national symbols, the likes of national flag and anthem, should be sources for unity in the Palestinian society that bolster the links between citizens. That is the applicable rule all over the countries in this world, to which Palestine must not be an exception.”

Indeed, columnists are appealing to the international community to stop the internecine violence. They want the United Nations as well to investigate the assassinations of everybody from senior PA officials such as former military intelligence chief Mussa Arafat to ordinary Palestinians. [10]

A major concern is that the violence that has racked the Gaza Strip would pervade the West Bank.

The wish for international intervention has largely come true. The PA has become the playground for foreign countries and their interests. Some countries, such as Kuwait, Saudi Arabia and the United Arab Emirates, have bought influence. Iran and Syria have hired mercenaries. Egypt and Jordan have become influential because of their proximity.

The most influential country in the PA has been Egypt. Over the last few months, Egypt has dominated several key areas of Palestinian government, particularly in the Gaza Strip. PA officials have been quoted in the Palestinian dailies as saying that Egypt would man major facilities in the Gaza Strip, including the PA airport and sea port.

Egypt Involved in Every Facet of PA

Under Abbas, Egypt has become involved in virtually every facet of Palestinian life in the Gaza Strip. Egypt and the PA have signed agreements to coordinate in everything from security, agriculture, trade to training. Under the agreement, Egyptian personnel would train and mentor virtually every major PA ministry. The two sides would also coordinate in planning for the delivery of up to $3 billion in G8 funding to the PA by 2008. [11]

On the eve of Abbas’s summit with President George Bush on Oct. 20 in Washington, the PA chairman has been projecting an image of helplessness. On one hand, he has challenged the Palestinians with the warning that they could lose their goal for an independent state if they cannot stop the violence. On the other hand, Abbas has done little more than warn of an eventual crackdown on insurgency groups. “People are saying this is a test for a Palestinian state,” Abbas said.

“If we continue on this path these people will say we don’t deserve one.” [12]

Not surprisingly, Palestinian columnists are focusing their attention on Hamas rather than Abbas. Together with Fatah legislators, they are appealing to Hamas to recognize the PA and end the violence. They regard Hamas as part of the Palestinian leadership and stress that the Islamic opposition must not forget its national responsibility. They also want Egypt –rather than the PA –to enforce any arrangement with Hamas.

“All sides have to follow, although not necessarily copy, the model of politically-advanced countries,” Al Quds’ Abdallah said. “Palestine aspires to a respectable place amongst other nations, and Palestinians will never accept the deterioration of their hopes to a fate that could be identical to what happened to Bosnia or Somalia.” [13]