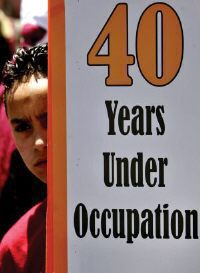 Jerusalem – Forty years ago on June 5, 1967, at 7:14 a.m., the Six-Day War began when IAF jets flew towards the airfields in Sinai and deep into Egypt.

For three weeks before Israel took this action, the world sought a political solution to the blockade that Egyptian President Gamal Abdul Nasser had imposed on Israeli sea traffic in the Red Sea.

Nasser delivered his May 20, 1967 speech, boasting that “we will never allow the Israeli flag to pass through the Straits of Tiran.”

This was not the first time that Israel faced an Egyptian blockade of Israeli shipping through the Sinai. In 1956, Israeli forces pulled out of the recently captured Sinai under American pressure, in exchange for a reported American guarantee that the U.S. would forcibly act if Israel was denied passage through the Straits of Tiran.

While Eisenhower recalled his role in forcing Israel to withdraw from the Sinai, he could find no record of any guarantee existed.

Without U.S. intervention, the die was cast; Israel had to act on its own.

In his first war order, Maj. Gen. Yisrael Tal, the commander of an Armored Corps division, noted: “Today we will go out to crush the hand that was outstretched to strangle our neck. This is a battle that the enemy wanted, the enemy began, the enemy will be dealt with multifold. We do not covet their land and their property. We did not come to destroy their countries nor to inherit them. We came to eradicate their plot of annihilation.”

The war was indeed preceded by days of existential fear. The public in Israel was exposed to Nazi-like Arab propaganda, which threatened to kill, to annihilate, to destroy and to throw the Jews into the sea.

“We shall meet in the ruins of Tel Aviv and we will make our dream of seeing the day of the destruction of Israel come true,” read the announcer on Cairo Radio, his voice choked with emotion, to the frenzied masses in the city streets of Egypt and Syria. Public gardens in Tel Aviv and Jerusalem were prepared to serve as mass graveyards, and a generation of concentration camp survivors felt like they were reliving those days of that persecution.

A “second Holocaust” did not occur.

At 10 a.m. June 5, 1967, the late Ezer Weizman, then the director of the IDF Operations Branch and the deputy chief of staff, called his wife and informed her with brevity: “the war is over. We’ve won.” He was referring to the fact that Israel had crippled air forces of all of its enemies before they could engage in aerial combat.

Weizman was right about the victory but was wrong about the war being over.

At 11:15 a.m., the Jordanians began to shell targets in Israeli-held West Jerusalem, the Jezreel Valley and the outskirts of Tel Aviv. King Hussein was deceived by Nasser, who had informed Jordan that Cairo was winning. King Hussein’s rash attack cost him control of Judea, Samaria and Jerusalem.

After 132 hours of combat, when the sun set on the Middle East on June 12, 1967, IDF soldiers were positioned on the banks of the Suez Canal in the south, on the Jordan River in the east and on the pinnacles of the Golan mountains in the north. The 19-year-old State of Israel had broken the ring of suffocation that had closed in around its exposed neck. The Arab armies had suffered their third defeat within 19 years. Israel chalked up one of the most stunning victories in military history.

Forty years after the Six Day war, Professor Michael Oren, author of the best-selling book Six Days Of War, observes that “The question of Israel’s existence is still on the agenda in full force on the Arab street…. Muslim civilization has been taken over by forces that have no doubt in their hearts that Israel is still going to be wiped off the face of the earth.”

Another Israeli historian, Professor Benny Morris, added that, “… The Muslim world still aspires to a bloody clash with the entire West and with Israel specifically. Their goal is Israel’s extirpation and its destruction as a Jewish state.”