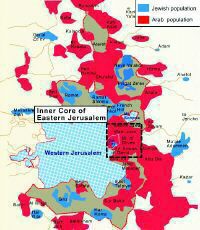 A week ago, in an attempt to show maximum flexibility during the forthcoming negotiations in Annapolis, Md., two senior Israeli cabinet ministers – Haim Ramon and Avigdor Lieberman – declared that they would be willing to cede Arab neighborhoods in Jerusalem, Israel’s capital, to the sovereign control of a future independent Palestinian state. “Ceding Arab neighborhoods in Jerusalem” does not sit well with many Israelis and conjures up images of what Jerusalem endured from 1949 until 1967, when the city of Jerusalem was divided between Israel and Jordan. In West Jerusalem, on the Israeli side of the divide, people from all religions could visit and reside. In East Jerusalem, on the Jordanian side, no Jew was allowed.

If a hostile PLO armed force, ostensibly still at war with the state of Israel, were to be based in any of these neighborhoods, it would be difficult to travel anywhere in Jerusalem with any assurance of safety.

The Bulletin asked Israeli government ministers Ramon and Lieberman how Jerusalem could exist with these competing security systems in different parts of the city.

The Bulletin asked the Israeli officials about the distinct possibility that Palestinian security personnel would simply block passage between Jewish neighborhoods, in places where an Arab neighborhood jutted between them.

Ramon’s office said they would not answer any questions.

Lieberman’s spokesman said the questions were premature, and that his statements were only meant to apply after a peace settlement is reached.

However, Palestinian expectations were raised, and all Palestinian spokespeople responded to Ramon and Lieberman with a litany of proclamations that they expected to gain control over all Arab neighborhoods in Jerusalem.

What most Israelis do not know is that the term “Arab neighborhoods in Jerusalem” refers in the Palestinian Arab parlance to 18 Jewish neighborhoods in West Jerusalem that bear Arab names such as Ataman, Bake, and Talbia.

The popular Palestinian on-line publication PalestineRemembered.com has educated a new generation of Palestinians to remind them that Jewish neighborhoods in West Jerusalem were predominantly Arab areas before the 1948 war, before Arabs left their homes in the wake of the Israeli victory in the 1948 war.

Since Israeli cabinet ministers had made the unusual offer of ceding land in the nation’s capital to a foreign entity, The Bulletin correspondent wandered to the Israeli Knesset Parliament and asked members of the Israeli government coalition if any member of the government coalition would go on the record as favoring a change in the Israeli Basic Law which recognizes all of Jerusalem as Israel’s capital under Israeli sovereignty, as stated in clear and simple language.

Not one member of the Israeli Knesset coalition was willing to say that he or she favored any change whatsoever in the Israeli law which incorporates all of Jerusalem into Israel.

In other words, the statements of Haim Ramon and Avigdor Lieberman were divorced from Israeli reality and had nothing to do with Israeli policy.

On Wednesday, after a week of public statements that Jerusalem Arab neighborhoods should be handed over to a sovereign Palestinian state, Israeli government minister Lieberman recanted and said it was not his position.

WITH DOUBTS ABOUT SUCCESS IN ANNAPOLIS, A SEPARATE ISRAELI-PALESTINIAN CONFERENCE WILL CONVENE TWO WEEKS EARLIER

With almost every media outlet in the Middle East expressing doubt the scheduled Middle East summit on November 26th will bear any fruit, public relations advisors to the Israeli, American and Palestinian leadership have suddenly orchestrated a high profile meeting with more than eighty senior Israeli, American and Palestinian leaders to discuss politics, security, communications and economics.

This gathering will take part in a forum that will take place at Saban Center for Middle East Policy Center between November 3rd and November 5th.

The Saban Center is directed by former US ambassador to Israel, Martin Indyk.

During his term of office in Israel. Indyk was often criticized for lobbying very hard for the Palestinian cause in the Israeli media and the Israeli Knesset. Indyk came under severe criticism when he made the official proclamation that the PLO, the Palestine Liberation Organization, had cancelled its covenant to destroy the state of Israel, when in fact, the subject of its cancellation was never even been voted on during a special session of the Palestine National Council on April 24th, 1996. The US Congress had forbidden the late Yassir Arafat and other members of the PLO from visiting the USA until and unless the PLO Covenant was cancelled. Indyk’s report allowed Arafat to be received with honors at the White House in May, 1996.

On Thursday, Israeli Prime Minister Ehud Olmert announced his intention to attend the November 3rd parlay and it was announced that the Middle East Quartet envoy, former British Prime Minister Tony Blair would be the main speaker on the official opening evening. The forum has scheduled plenary sessions on the Saudi Initiative, the Iranian nuclear threat, the role of the intelligence community and the democratization policies advocated by the USA and other democratic governments in the West.

If for some reason the Annapolis Summit does not occur, Olmert, Abbas and senior American government officials will still have been afforded the chance to meet and conduct negotiations.