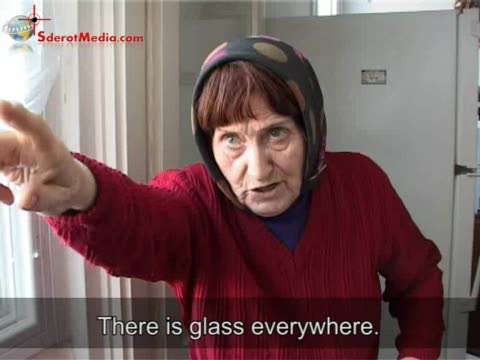 Her husband died a year and half ago.

She now lives alone in her Sderot apartment with her five cats to keep her company.”I live in fear here in Sderot,” says Maria.

Six Palestinian rockets have exploded near Maria’s apartment complex on a quiet residential street in Sderot.

The most recent Palestinian rocket attack on Maria’s neighborhood took place only a week ago, on Monday, December 29.

A Palestinian rocket landed in the courtyard right behind Maria’s kitchen but did not explode.

However, the impact of the rocket attack shattered the glass windows in Maria’s kitchen and living room.

Damage from the rocket impact reached the fourth floor of Maria’s apartment complex.

She no longer has a boiler or air conditioner as rocket shrapnel caused heavy damage both.

“It gets so cold at night,” says Maria. Sheets of plastic, held by duct tape, cover the broken windows in Maria’s home.

A volunteer knocks on Maria’s door and enters with extra blankets for the old lady.”My Philipino caretaker left me after this past rocket attack,” says Maria in Russian. “She got very scared.” Maria has a new caretaker now, but doesn’t know how long she will stay. One of Maria’s cats was wounded in the rocket attacks.

The door to the kitchen is broken and the clock has cracked. The time says 12:10 and Maria explains that the clock stopped working at the time the Qassam rocket slammed into the courtyard. “I was taking a bath at the time of the rocket attack,” says Maria. “My caretaker was with me when we heard the siren, Tzeva Adom.”

Like the fifty other apartments in the complex, has no shelter. Most of the residents are Russian immigrants who speak little Hebrew. “When the alert goes off, I run to the innermost room in my apartment, one without windows,” explains Maria. Next week, Maria has a meeting with a psychologist, although she appears to be in fair spirits. This is not the first time that Maria has lived through war.”I lived in the Ukraine during World War II,” says Maria. “I was a baby when the Germans began attacking my city.”

One of the German bombs blasted Maria into a wall in her home, injuring her legs.

Maria, however, is very angry with Hamas. “I am proud of the Israeli soldiers. If I could, I would join the IDF in the fight against Hamas,” says Maria, banging her cane on the floor. In the Ukraine, Maria was a principal of a school, and earned her BA and MA at a Russian university. When she arrived to Israel with her husband in 1996, she worked as a Russian language teacher.

The couple moved to Sderot after living in Bat Yam for four years. Her husband suffered a heart attack seven years ago, and lay bed ridden.

During that time, Maria took care of him and also worked until he passed away. “I only hope that there will be some peace and quiet for us here in Sderot,” finishes Maria. “I am too old to continue living with this kind of danger. You never get used to war.”