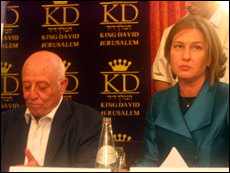 This was the first time the two had met since they engaged in substantive talks on a weekly basis when Livni was Foreign Minister in Ehud Olmert’s government after the Annapolis conference.

Throughout her speech Livni repeatedly referred to the need for a “two state” solution and used the words “two states for two people” and similar phraseology, while Qurei, on the other hand, did not utter the words “ two states” or “two state solution” even once. In addition Livni spoke of the need to “divide” the land that is between the Mediterranean sea and the Jordan River at several points in her remarks, but Qurei did not use similar terminology of “dividing” the land.

Livni and Qurei’s speeches were part of a conference titled “The Israeli-Palestinian Proximity Talks: Lessons from Past Negotiations,” which was organized by Hebrew University’s Harry S. Truman Institute for the Advancement of Peace in conjunction with the German based Konrad Adenaur Stiftung group.

While Qurei did refer to the Oslo Accords as “the most important historical breakthrough in the history of the conflict,” and also refereed to his negotiations with Livni after Annapolis as “serious negotiations”, once can not help but wonder why he chose not to utter the words “two-states” even once?

Is it possible he did not do so, because on the Palestinian street, more people are talking about “a one state solution,” or waiting to obtain all of ‘historic Palestine’, such that Fatah determined that was no point for it to waste any efforts on uttering “two states” when Livni is not even in power.

Regarding the resumption of negotiations, Qurei did not soften the official Fatah stance. He said “I don’t think it is possible for PA leadership to go to direct negotiations “without the stopping of settlements.” He referred to Netanyahu, saying “you know that he continues the settlements,” despite the apparent settlement freeze.

Qurei also said that Netanyahu “is taking unilateral actions in Jerusalem”, regarding home demolitions and other matters, such as construction of roads. “The Jerusalem situation is a time bomb,” he said.
Notwithstanding the rivalry between Hamas and Fatah, it is interesting to note that Qurei made an effort to support the rights of members of Hamas’s legislative council, to remain in Jerusalem. (is that a sign that his radar is more attuned with Hamas than Israel? )

“No one can accept that Israel has released representatives of Hamas Legislative council [from prison since 2006] and then is making them leave Jerusalem,” Qurei said.

He also complained that Netanyahu had deviated from the course taken by the government in which Livni had served. “If there is no stable policy, there will be no process,” he said.

Qurei said that the lack of progress was not a “problem of public opinion” but a problem of leaders,” such as “their tactics and personal motives”( although presumably he was directing those remarks at Netanyahu and other leading members of his coalition, and not PA President Abbas).

Qurei ended his comments by saying that he personally believes that “people on both sides will support any just agreement that will be reached [emphasis added].” Here again rather than saying “two state solution,” as Livni did throughout her speech, Qurei used the much more nebulous phrase, “just solution.”

Livni and Qurei shook hands after he finished his remarks.

During her own talk, Livni mocked the Netanyahu government for not getting direct peace talks off the ground. She said the Annapolis talks, which took place while she was foreign minister, “didn’t fail, didn’t end, it was stopped” by elections.

“Less than two years ago, we met at this hotel a few times a week,” she said, referring to her meetings with Qurei.

“The press wasn’t here because it was not news. It was just the ongoing relations between the Israelis and Palestinians.”

Livni stressed that to make progress in the process, “It’s not about public opinion. It’s about decision making [by] leaders. I believe that the role of a leader is to make a change in the long run for their people.”

She said that negotiating requires “trust”, that “the other side wants to end this conflict on the basis of two states.”

“Now there are no talks about how to end the conflict,” she said

Livni warned that ‘time works against the vision of two states,” and that it was not in Israel’s interest to “wait until someone forces us,” or “puts completely different maps before us.” She rejected the notion that Israel “should wait for a better partner.”

“ The idea of two-nation states represents the best interest of Israel. It’s about our future and existence of Israel and of the Jewish people.”

Livni referred to the framework that she and Qurei had agreed on in their negotiations.

Livni made it clear that even if an agreement were reached with the Palestinian Authority in the West Bank, the agreement would not be implemented with Hamas in power in Gaza.”.

“If we had an agreement, we won’t give the keys to Hamas”

But having a two-state solution is going to “force the Arab world to decide whether to support the agreement,” and it will make “the Palestinians have to decide” what they want…So it’s a “win, win situation.”

Livni warned that while Israel would have to make concessions for peace, the lack of peace would prove more costly.

She ended her remarks by saying “This is the time of decisions.”

Both Livni and Qurei were ushered out of the room with no time given for questions from the audience of several hundred people.

CRITICISM OF LIVNI AND QUREI

After the two had left the room, Prof. Tamar Herman, Senior Fellow of the Israel Democracy Institute said that she felt both Livni and Qurei were being “insincere” when they said that the conflict “is not a problem of public opinion but one of leaders.” She said that Livni herself had said that her talks with Qurei had to be “closed talks” without the public, because public opinion is a very important factor in the conflict. She noted the irony of coming to the room to say that this is an issue of leadership and downplaying public pinion, while at the same time both sides “spend fortunes on polling public opinion.”

She also made a rather stinging criticism of Livni, saying “I don’t recall Mrs. Livni ever talking so much about the need to have two states when she was Foreign Minister.”

Walid Salem, a Palestinian, who is the Director of the Center for Democracy and Community Development in Jerusalem, who spoke after Livni, took issue with Livni’s comments that even if an agreement with the PA were reached, it would not be implemented in Gaza with Hamas in power. He chided Livni for not going far enough in her positions. His view was that any agreement would have to be implemented immediately and that it was not acceptable to say “we are ready to have an agreement but we will postpone its implementation.” He insisted that Hamas would have to be engaged in an agreement.

He suggested “creating a parallel process” which would engage Hamas by having Israel and Hamas agree to some sort of “hudna.”[ time limited cessation of violence], which “would be continuous and renewed.”

He also suggested using the Arab Peace Initiative as part of the process as a way of “pressuring Hamas to support the peace process.”

One final point to remember when Livni spoke about “not giving keys to Hamas,” is that in the January 25, 2006 Palestinian parliamentary elections, Hamas won over Fatah in both the West Bank and Gaza. There is therefore no reason to be confident that Hamas won’t soon hold the “keys” for the West Bank, not just Gaza, after any agreement with Israel is signed.

[The final results of the 2006 Palestinian parliamentary elections were that Hamas won the election, with 74 seats to the ruling Fatah’s 45 seats. Of the Electoral Lists, Hamas received 44.45% and Fatah 41.43% and of the Electoral Districts, Hamas party candidates received 41.73% and Fatah party candidates received 36.96%. (http://www.answers.com/topic/palestinian-legislative-election-2006 ) ]

And guess what? At the time Hamas beat Fatah in January 2006, the Palestinian Prime Minister was none other than Ahmed Qurei.

One final point-The latest poll by the Palestine Center for Public Opinion shows that Hamas’s popularity in the West Bank has increased in the last few weeks. [(http://www.imra.org.il/story.php3?id=48722 )].