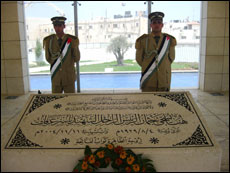 REFLECTIONS WHILE STANDING ON ARAFAT’S GRAVE IN RAMALLAH

RAMALLAH – It was a very stange feeling standing at Yassir Arafat’s grave in Ramallah last month. I began to think that it would be rather ironic if there were a sign at his graveside that said “may he rest in peace.”

I couldn’t help but think that if Arafat and I were destined to meet, I’m glad I was above ground and he was below ground.

Across from his grave there is a building which appears to be some sort of media center, with a large sign saying words to the effect that all Palestinan refugees are entitled to return to their pre-1948 homes.

Two serious looking uniformed guards with caps, and green and red insignia on their shoulders stood at either end of Arafat’s coffin in the air-conditioned vestible.

There were no signs, no plaques, no photos of Arafat.

I began to wonder why there was no tourist or souvenir shop where I could buy Arafat memorabilia. Ramallah is short on tourist attractions, and this would be an obvious one. Hadn’t someone thought of it?

Then I began thinking that someone could design a game to be sold in the souvenir shop where people from all over the world could guess what exactly Arafat died of, how much money he stole from the Palestinian people, and where it all was. That game might end up being a best seller.

Then I began thinking that it would be best for me to get out of there, before someone guessed what I was thinking.

One final very serious thought. Very few people know or remember that Pinchas Inbari, an Israeli journalist reported that Arafat’s Palestinian Liberation Organization DID NOT RATIFY the Oslo Accords after Arafat signed them.

Remember that on September 13, 1993, at the White House, Israeli Prime Minister Yitzchak Rabin and Israeli Foreign Minister Simon Peres signed the “Declaration of Principles” (the DOP) between Israel and the PLO together with Yasser Arafat and Mahmoud Abbas of the PLO. The agreement, which had been hammered out in Oslo, stipulated mutual recognition between Israel and the PLO. It required the PLO to cease and desist from terrorism, and for the PLO to nullify its covenant, which calls for Israel’s destruction.

The Israeli Knesset ratified the Oslo accord by a vote of 61 to 50, with 9 abstentions, a week later. However, what received hardly any attention was the fact that on October 6, 1993, the PLO executive did not ratify the Oslo accord, for lack of a quorum.

Pinchas Inbari, the only Israeli correspondent covering the PLO in Tunis at the time, writing for the Israeli left-wing Hebrew newspaper Al HaMishmar, broke the story of the PLO non-ratification of the Declaration of Principles (see David Bedein’s article on this point in http://www.israelnationalnews.com/SendMail.aspx?print=print&type=1&item=7277 ).

The rest of the Israeli media, however, did not report that the PLO never ratified the accord, while the Israeli government acted as if the PLO had done so.

As David Bedein, director of the Center for Near East Policy Research recalls, “Inbari was scheduled to appear on a popular morning KOL YISRAEL radio show when he got back from Tunis. However, the Prime Minister’s office asked Kol Yisrael to cancel that appearance. Instead, the Israeli government dispatched then deputy minister of Foreign Affairs, Yossi Beilin, to fly to Tunis to thank Arafat for facilitating the ratification ofthe Oslo accord, which Arafat and the PLO never did.”

It’s too bad that in the desire to falsely believe and hope that Arafat was genuinely trying to usher in an era of peace, the Israeli government and media chose to overlook the PLO’s significant failure to ratify the Oslo Accords. It was a sign of things to come. As Prime Minister Netanyahu embarks on negotiations with Mahmoud Abbas, Arafat’s successor, it’s worth ruminating on this point.

Standing at Arafat’s grave, I also thought of my interview in July of this year with Michael Widlanski, a former New York Times reporter, and now a senior analyst at the Media line and lecturer at the Rothberg School of Hebrew University, who uncovered the record of duplicity of Arafat’s PA. Widlanski personally reviewed nearly a half a million documents contained in the computer discs, hard drives and file boxes that were seized by the Israeli government when then Israeli minister of Public security Uzi Landau in 2002 ordered the disclosure of Orient House, which was the quasi-official seat of the PA in East Jerusalem.

As Widlankski, who sent me a number of copies of the documents in Arabic, said “The documents repeatedly showed that Arafat was in day to day control of the details of the Palestinian authority’s military operations…They showed irrefutably that he controlled Fatah’s tanzeem militia, [and other terror organizations] not that they controlled him.”

The documents showed that Arafat’s proxy’s such as Faisal Al Husseini relayed requests for approval of expenditures to Arafat himself. For example, among the captured documents were reports addressed to Faisal-Al-Husseini, from a joint field committee of Palestinian organizations detailing terrorist operations carried out in Jerusalem, along with a budget request to cover operational costs for the coming month.

“After Al-Husseini initiated this document, he wrote a separate letter to Arafat relaying the request and recommending he approve the expenditure,” Widlanski said.

(To view the article that Widlanski wrote at the time detailing his “finds” see: http://webcache.googleusercontent.com/search?q=cache:9R3hyod7-9sJ:www.israelbehindthenews.com/bin/content.cgi%3FID%3D1386%26q%3D1+michael+widlanski+orient+house+media+line&cd=5&hl=en&ct=clnk&gl=ca ).

The documents from the Orient House, which are stored in a warehouse in Beit Shemesh, provide insight into the workings of the Palestinian Authority secret police in Jerusalem and the involvement of the PA in all areas of organized crime – drugs, prostitution, arms smuggling, and car thefts.

Two police officials asked journalist and researcher David Bedein several years ago if he could find private funds to translate these documents. However, as Bedein says, the police officials later informed him that a decision was made to not disclose these documents to the public.Bedein asked the chairman of the Knesset Foreign Affairs and Defense Committee, MK Tzachi HaNegbi, as to why such a decision was made. HaNegbi said that the answer to that question is “classified”.

And as I left Arafat’s grave, I couldn’t help thinking that there must be so many other still undiscovered secrets buried with him.

It’s too bad that in the desire to falsely believe and hope that Arafat was genuinely trying to usher in an era of peace, the Israeli government and media chose to overlook this significant failure. It was a sign of things to come. As Israeli Prime Minister Netanyahu embarks on negotiations with Mahmoud Abbas, Arafat’s successor, it’s worth ruminating on this point.