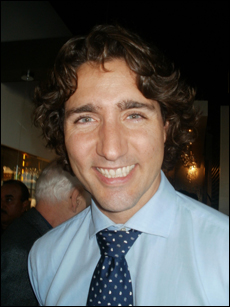 Last month I published the first part of my interview with Justin Trudeau, the son of former Canadian Prime Minister Pierre Elliot Trudeau, which can be accessed, by clicking here. What follows is the second part of the interview where I referred Trudeau to a photo I had taken on August 11, 2010 of a large mural of a Palestinian suicide bomber on a school run by UNWRA [ United Nations Relief and Works Agency] in the Deheishe Palestinian Refugee Camp. The mural is of 18 year old female suicide bomber, Ayat al-Akhras, a graduate of the UNWRA school, who blew herself up at a Jerusalem supermarket in 2002, murdering two Israelis. [see photo]

SPIVAK: There’s a concern that the Palestinian Authority hasn’t really changed its educational system to be promoting messages of reconciliation as opposed to incitement. [Trudeau is referred to the photo] As a teacher, [Trudeau was a teacher for five years before entering politics] what do you think about the importance of giving to the next generation messages of peace vs. incitement?

TRUDEAU: That for me is the key for progressing… as a society… in any conflict…In conflicts and wars there are always tremendous losses on both sides, and a society needs to make a real decision do we promote that, do we continue that or do we try to move beyond it… towards a place where there isn’t an automatic mistrust and hatred. Unfortunately for political aims it is easier to… for leaders…of a political body… to continue to point fingers rather than to build bridges. That is something [building bridges] that people have to start doing in all societies…

Now, the big impediment to that is that it’s easiest to divide when people have empty belies, when the sense of hope for something good isn’t necessarily tangible…So the more there is economic suffering…marginalization, and lack of capacity to dream big and achieve those dreams,then people fall into the pit of aggression and enmity articulated through a form of an nihilism like suicide bombers. This young woman who graduated from school, maybe she wanted to be a veterinarian, maybe she wanted to work with kids, maybe she dreamed of being a lawyer, but for various reasons was told that her best shot at living a successful life was to ending it in glory and… nothing she saw around her was… legitimately projecting that she could escape that. That is a failure not just of that community but of all humanity to not instill a sense of possibility in young people in vulnerable situations.

SPIVAK: Yes but at the same time the mural was on an UNWRA school and the West supports and funds UNWRA. Are you disturbed that that’s the mural on the school?

TRUDEAU: Yes absolutely, I’m disturbed,… I’m not too up on what sort of funding is given where, but certainly we need to encourage people to dream of saving and healing their society and not killing others obviously. That glorification of violence and worse of martyrdom is not something that…. one would want to be giving to young people.

The Winnipeg Jewish Review also sent the photo of the mural of the suicide bomber to MP Bob Rae, Liberal Foreign Affairs Critic, asking for his comment.
SPIVAK: Do you have any concerns about the education being delivered in this UNWRA school that clearly promotes glorification of a terrorist, and if so, is the Harper Government’s decision to cut aid to UNWRA’s general budget, including education, in favour of food aid only, a commendable one?

RAY: Under both Liberal and Conservative governments, Canada’s position has been very clear with respect to the need for UNRWA to maintain political neutrality. Past Liberal governments and the Liberal Party today has expressed concerns in this regard to the UN agency. UNRWA has a responsibility to ensure that the distribution of its funds is done responsibly. Schools should be a place for peace and learning, and there is no place for representations that detract from those objectives.

It is also important that we recognize that the funding of UNRWA has been a responsibility and a commitment of a number of countries, of which Canada is one. We don’t believe in playing partisan politics on this issue. Our view is that in order to have any positive effect, Canada must work closely with our allies, including the United States, to effect change – not take unilateral decisions without consultation.
CONSERVATIVE MINISTER PETER KENT RE: MURAL OF SUICIDE BOMBER ON UNWRA SCHOOL:

I also asked Conservative Minister Peter Kent, MP for Thornhill about the mural of the suicide bomber on the UNWRA School.

On seeing the photo, Kent said: “.. As you know, the official media of the Palestinian Authority has many leaders and the sorts of folks putting up this… inciteful terororist art…[seen in the photo] are obviously not listening to the words that President Abbas spoke in Washington [about ending incitement] or that Foreign Minister Al Malki spoke to me in Ramallah.”

Kent continued,“ I made the point to Foreign Minister Al Malki that they[the PA] need to be consistent with the domestic population and… not just [be] sending two messages, one to the international community and one domestically…I made that clear.”