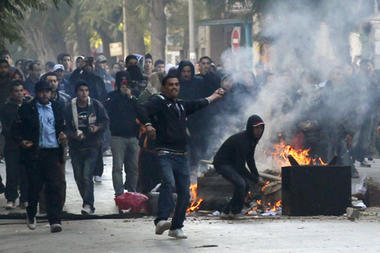 AIRO –(MCT)Hours after riots forced Tunisian President Zine el Abidine ben Ali to flee his country, hundreds of Egyptians poured into the streets of Cairo with a warning to their own authoritarian president, Hosni Mubarak.

” Ben Ali, tell Mubarak a plane is waiting for him too!” they chanted late Friday night. “We are next. Listen to the Tunisians; it’s your turn, Egyptians!”

The slogans were a burst of envy and elation in a country where people have protested for years but have never ignited a mass movement to threaten Mubarak’s nearly 30-year-old police state. Dissidents were finally daring to contemplate the possibility that public anger really could explode and bring dramatic change.

But the euphoria was mixed with sobering concern that the popular revolt in Tunisia, which, for the first time in modern Arab history, toppled a dictator, cannot be easily replicated. Across the region, bickering opposition parties and religious differences between Islamists and moderates have fueled mistrust and allowed repressive governments to splinter dissent.

“I believe we can do here what happened in Tunisia,” said Ahmed Maher, leader of the April 6 youth movement in Egypt. “But activists need to gather large numbers of people without any interference from opposition politicians with their own agendas.”

Camaraderie among protesters has swept cyberspace, creating lively tableaux of opinions and strategies on Internet social networks. It’s almost as if for a fleeting moment, Egyptians, Jordanians, Moroccans and others have vicariously become Tunisian. Facebook users changed their profile pictures to the Tunisian flag and uploaded riot videos from the North African country.

In Jordan, thousands of demonstrators marched Friday in several cities against rising food prices and unemployment. As regional leaders fret over the events in Tunisia and recent protests in Algeria, Arab news reports said that King Abdullah II has set up a military and intelligence task force to contain any unrest.

The question is, can protests relying on street passion and Twitter bytes overthrow other regimes that for years have consolidated their power and, perhaps more cannily than Ben Ali, conjured at least the facade of democracy.

Despite widespread public disillusionment and the excitement over what has unfolded, the Arab world is not Eastern Europe of 1989, when protesters stormed boulevards and communist governments tumbled.

The region is consumed with Iraq, Islamic extremism, the Palestinian-Israeli conflict and the influence of Iran. These issues have tended to overshadow poverty and human rights abuses, making the chances smaller for the kind of grass-roots Velvet Revolution that overthrew the government in what was then Czechoslovakia.

Some have suggested, though, that images of the fleeing Tunisian president amid tear-gas-shrouded streets being broadcast nonstop on Al Jazeera could be the seeds of rebellion for a new era.

“Tunis today may well go down in history as the Arab equivalent of the Solidarity movement in the Gdansk shipyard in Poland in 1980 that sparked wider protests that a decade later ultimately led to the collapse of the Soviet Union and its empire,” wrote Rami Khouri, director of the Issam Fares Institute for Public Policy and International Affairs at the American University of Beirut.

There was a magical quality to Tunisia’s uprising, which transcended religious and political divides and united a population – young and old, educated and not – resentful of years of unemployment, hopelessness and oppression. A similar sense of wonder filled the Middle East during months of violent street protests in 2009 against the re-election of Iranian President Mahmoud Ahmadinejad.

But singular, galvanizing events in those countries provided the spirit of revolt that has been absent in Egypt and other nations. In Tunisia, street rallies broke out in December after Mohammad Bouazizi, a distraught university graduate, set himself on fire after police closed his fruit stand. In Iran, a video of the death of Neda Agha-Soltan, who was shot near clashes between government militias and demonstrators in Tehran, energized demonstrators there.

Ben Ali’s fate is evidence of the dangers that autocrats such as Mubarak face by clinging to hollow ideologies and losing touch with the aspirations of their citizens. It also points to the entrenched mechanisms of power in the region, and how aging leaders want to keep their offices in the family. Like Ben Ali, the presidents in Egypt, Libya and Yemen are grooming sons to inherit their posts.

The Tunisian regime’s unraveling came during a visit to Qatar last week by Secretary of State Hillary Rodham Clinton, who criticized the region’s “corrupt institutions” and stagnant political order. Many Arabs regard the United States with skepticism, but Clinton’s pointed language suggested that Washington was intensifying pressure on Ben Ali, Mubarak and other allies over a lack of civil and economic freedoms.

“Tunisia and Egypt are very similar,” said Ayman Nour, who was jailed after running against Mubarak in the 2005 presidential election. “We are talking about two police states ruled by tyrannical regimes that have presented themselves to their own people and to the West as the only possible choice for financial development, maintaining security and fighting terrorism.

“I don’t think that we need nationwide protests to reach the same results as in Tunisia. We only need demonstrations to erupt in a few main cities like they did in the 1919 revolution against the British.”

Such turmoil hasn’t erupted because, in part, Egypt is more tolerant than Tunisia, allowing a robust independent news media and an air of democracy. The Egyptian government’s most potent threat comes from millions of disgruntled workers, but they have not aligned with disparate opposition groups. Even Mohamed ElBaradei, a Nobel Prize laureate and the former head of the United Nations nuclear watchdog agency, could not rally the country with a new protest movement.

“Tunisia was in a state of complete and full dictatorship, with no outlets for expression,” wrote Abdel Rahman Mansour, a journalist and blogger. “This is not the case in Egypt, because Mubarak is smart and he can hold things in the middle.”

Holding the middle in the Arab world is getting more difficult these days. Al Jazeera beams national transgressions into living rooms and cyberspace activists outflank police and intelligence networks. The young are restless, and many, like the fruit vendor who set himself on fire, are angry and bereft of hope.

Maher, the Egyptian protest leader, put it simply: “We need a starting point that will trigger people’s anger.”