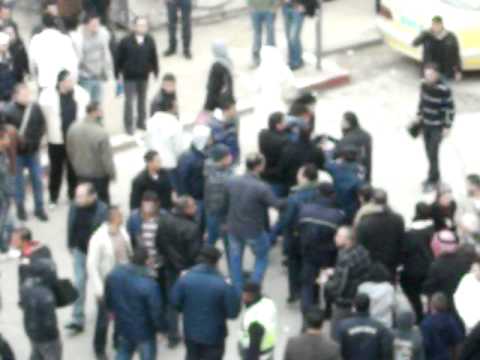 It has arguably not been a good week for Palestinianian Authortiy President Mahmoud Abbas.

Last Saturday February 5, The Palestinian Authority finally allowed a protest to take place in Ramallah in solidarity with thre Egyptian people against Egyptian President Hosni Mubarak, after PA security forces had shut down previous attempts by protesters to hold such rallies several days earlier. While this protest has not received wide coverage in the international media, it may well be a harbinger of things to come.

Ma’an News Agency reported that there were about 1000 protesters, and “Residents, students and civil society representatives raised Egyptian flags and posters called on the Egyptian president to resign. Protesters held banners including “From Ramallah to Tahrir Square, the people want change,” and “Down with oppressive regimes.” [ http://www.maannews.net/eng/ViewDetails.aspx?ID=357234 ]

Ma’an, however, did not mention in its report that some of the protesters began calling for the downfall of PA President Mahmoud Abbas, something which Amira Hass, reporting in Ha’aretz did include. For her full story, click here.

As Hass wrote, “Toward the end of the protest, a slogans quarrel erupted. “The people want the fall of Abbas!” chanted a number of students, apparently from Bir Zeit University, referring to Mahmoud Abbas, president of the PA. They were immediately countered by the chant: “The people want an end to the inqisam” (the internal Palestinian rift).[emphasis added]

“Eventually, when hardly any demonstrators remained at the square, a group of youths appeared out of nowhere with flags of Fatah and pictures of Abbas, chanting: “The people want Mahmoud Abbas!”

While this protest (which organizers said actually had 2000 people) has not received wide coverage in the international media, it may well be and indication of what is yet to come. In my view, it is highly unlikely that the PA would have allowed the protest without making sure there were ample supporters of Abbas present, yet notwithstandin this, calls for Abbas’s downfall were heard.The fact that Hass reported that at the end a group of youths appeared with flags and pictures of Abbas may well suggest that the regime was ready to use youths to help it stage an appearance of loyalty and support for Abbas.

Also, of interest is that Ma’an reported that protesters at the event complained that the security forces were using “excessive force.”

Abbas is considered to be close to Mubarak, such that the fall of Mubarak may well have implications for Abbas’s survival as a leader of his people. Today, Ma’an reported that a senior aide to Abbas, Tayed Abdul Rahim launched a scathing attack yesterday against pro-democracy protesters demonstrating against Mubarak’s authoritarian rule. Abdel-Rahim said in a statement that thre protests were ” being planned by international and regional forces with the help of local tools.”

But, most of the talkbacks on Ma’an’s website showed that Palestinians disagreed with him and also are angry with the PA.. One talk backer wrote that “.. us Palestinians we have the same feeling about you and your corrupt Palestinian Authority.pa turn is next.” Another wrote: “The bribed clowns of PA show their true faces. Incredible.”

Another wrote: “I doubt the PA could get any more pathetic even if it tried its hardest. It is laughable how it accuses others of colluding and collaboration when it is the biggest Quisling entity in the history of Palestine.” [ http://www.maannews.net/eng/ViewDetails.aspx?ID=358558 ]

The PA initially chose to disallow any protests in solidarity with the Egyptian people. Arguably the one on last Saturday was allowed, after realizing that when other neighboring Arabs such as those in Jordan were protesting, it would look strange if the Palestinians were not doing anything at all.

Two days prior,on February 3, the PA banned protests in support of Egypt. Ma’an reported on Feb 4, that the PA banned “unlicensed’ gatherings to preserve order in the West Bank in response to the demonstrations in Egypt. In the statement the PA security services spokesman Adnan Dmeiri said that the demonstrations would “create chaos” and “The priority for Palestinians was to empower popular resistance against the occupation and to work for independence, he added.”

If one reads between thelines, the implication is that the regime feared that the protesters may have turned their wrath not only against the occupation but againt Abbas and the PA. Otherwise, what kind of chaos could Dmeiri be referring to?

According to Ma’an, in a statement, protest organizers insisted they would continue “mobilizing events in support of freedom of speech, against Israel’s occupation and apartheid, and in solidarity with struggles around the world, especially in the Arab world, for freedom, democracy and social justice.”

In regard to democracy, Abbas’s term as president ended in January 2010, but elections have not been held, for the reason that Fatah and Hamas are at odds with each other, and without national reconciliation it is difficult logistically to call an election. Ma’an has recently reported that Abbas is going to call national elections by September, in the aftermath of the recent protests in Egypt.

Sam Bahour, a Palestinian-American who serves as a Board of Trustees member at Birzeit University wriote in Ma’an this week in an article entitled “Palestine is the key to Arab democracy”: (To read the full article, click here. )

“The obvious question is: if Palestinians are so experienced in taking to the streets, why then are there so few serious demonstrations in Nablus, Ramallah, Bethlehem or Gaza in solidarity with the Egyptian people? The reason is that the Palestinian Authority has been co-opted by a US-dominated and foreign-funded agenda which, in times of crisis, understands a single tool: force.”

He goes on to say:”The main factor preventing the Palestinians from continuing on their path to structural reform, following their first genuine elections in 2006, is the refusal of the US to accept the results of those elections.”

Bahour seems to be saying that the US and the world ought to have recognized Hamas as the truly elected respresentatives of the Palestinians in 2006–but if that is the case, then Hamas would rule in the West Bank since they not only won in Gaza in 2006, but in the West Bank also.

This summer after being in Ramallah I reported that I did not see any real signs of Abbas’s popularity. (See “No Indication Of Abbas Popularity” which can be accessed by clicking here.)

I wrote this before the Palestine Papers were leaked by Al-Jazeera which arguably have only weakened Abbas on the Palestinian street by showing he appeared to be willing to make “concessions” (i.e. on Jewish neighborhoods in Jerusalem over the green line) which he later denied.

ABBAS AND OTHER PA FIGURES HAVE TAKEN OUT JORDANIAN CITIZENSHIP

To make things worse, this week it came to light that Abbas, and other Fatah figures all have taken out Jordanian citizenship at their own initiative. This disclosure comes at a time when King Abdullah’s regime (which has historically allowed Palestinians to take citizenship since Jordan ruled the West Bank from 1948-1967) has been stripping several thousand Palestinians of citizenship due to fear of being eventually being overtaken by the Palestinian majority in Jordan.

“The paper did not say when the Palestinian officials were given Jordanian citizenship. PA spokesmen in Ramallah refused to comment on the report.

“A Fatah official, however, said that he was not surprised to hear that Palestinian leaders were carrying Jordanian passports. He said he believed most of the PA leaders had applied for and received Jordanian passports in the past 15 years.

In an editorial, Al-Quds Al- Arabi didn’t mince words in criticizing the Palestinian leaders who applied for Jordanian citizenship.

“This is shameful for them because they and their families should be proud of their Palestinian citizenship,” the paper wrote. “If they don’t believe in their own citizenship and are not proud of it, this means that they are not loyal to the Palestinian Authority and don’t deserve to speak on its behalf.”[emphasis added]

The paper noted that it was the PA leaders who had asked for Jordanian citizenship, and not the Jordanians who had offered it.

“They were the ones who applied for it, and perhaps they had embarrassed senior Jordanian government officials with the requests,” it wrote. [emphasis added]

The Jordanians were unable to reject the applications “out of courtesy and generosity,” the paper said. [emphasis added]

Already in the Israeli media,some have suggested that if the US is backing democracy in Egypt, then it ought to also push for elections in the Palestinian territories. Shula Romano Horing, an Israeli American published an article in Ynet this week in an article “Obama, Don’t be A Hypocrite ” saying exactly that:

“..Israel’s government should not agree to negotiate for the establishment of a Palestinian state in the strategic hills of the West Bank until the Palestinian people first have a chance to cleanse its leadership and move towards lasting democracy, as Obama has demanded from Egypt. Israel needs to know who will be the ultimate true representative of the Palestinian people before giving away strategic assets.

“It is quite dangerous for Israel – and hypocritical of Obama – to ask the Jewish State to agree to the establishment of a state that eventually through free elections or a military coup may be taken over by an Islamic, pro-Iranian terrorist organization. After all, Hamas’s stated goal is the destruction of the Jewish state and global Islamic rule.”

She continued that until the PA and Hamas reconcile, “any new election would not reflect the true preference of the people.”

Romano-Horing added ” Moreover, Israel must demand the PA establish an independent judiciary and the rule of law, including towards opposition parties, as Obama has demanded from the Egyptians. The recently published “Palestinian Papers” revealed that the CIA and British intelligence were aware that hundreds of Hamas and other activists have been routinely detained without trial in recent years, and subjected to widely documented human rights abuses and torture. The PLO’s chief spokesman, Saeb Erekat, is recorded as telling senior US official David Hale in 2009: “We have had to kill Palestinians to establish one authority…We have invested time and effort and killed our own people to maintain order and the rule of law.

As she concluded: “US President Barack Obama said Tuesday that a transition to democracy in Egypt “must begin now” and should lead to opposition participation in free and fair elections, adding that Mubarak “recognizes that the status quo is not sustainable and that change must take place.” Now, Israel should demand no less from Abbas and the Palestinian Authority.”