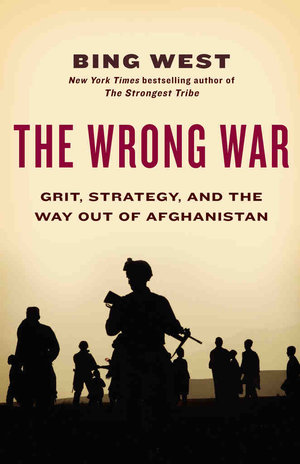 The Wrong War
Grit, Strategy and the Way Out of Afghanistan
By Bing West More than 20 years ago, a veteran Moscow reporter who had covered the Russian defeat at the hands of the Taliban in Afghanistan came into the press center in Jerusalem holding a captured colorful copy of the Taliban training manual, printed by U.S. Special Forces who trained the Taliban to resist the 1979 Soviet invasion of their country.

Thumbing through the brochure, which was based on instilling ideals of Afghan patriotism into the hearts and minds of a people under attack from a superpower, one might have found it hard to believe that the Taliban would thwart the Soviets before long and then turn on their U.S. former mentors.

It all comes down to a misunderstanding of the adversary that the foreigner encounters in the Middle East.

The Soviet Union thought that it could overcome a grass-roots movement with brute force. Bing West argues that the Americans think they can defeat a nascent nationalist movement with incentives and bribes, while holding out the hope of a better life for a people they have come to help.

West, a Marine Corps veteran of Vietnam, an assistant secretary of defense under Ronald Reagan, and the author of six other books on the military, shows that neither method can work.

Adopting the approach of an old-fashioned, shoe-leather reporter, West went out to see for himself what was happening on the battlefield. Providing the reader with a new way to use a book, West directs readers to YouTube, where they can follow him through the field on his visits to combat units in Afghanistan.

What West found in Afghanistan was a new kind of American force, made up of motivated troops in a war that has generally enjoyed the support of conservatives and liberals alike – in sharp contrast to the Vietnam quagmire, in which draftees fought a war that became increasingly unpopular with liberals and the mainstream media.

One of the lessons of Vietnam was that even if you provide the local population with roads, schools, and first-class health care, loyalty to clan and tribe remains more important to their sense of pride, dignity, and self-respect.

West makes it plain that he thinks Americans have forgotten that lesson. He describes a policy of paying off Afghan tribes ready to align themselves with a U.S.-led force made up of troops from no fewer than 47 nations. Yet he finds numerous instances in which villages received American aid but still hosted Taliban who ambushed American troops.

West describes another forgotten lesson of Vietnam – that when you fight a war in which the adversary lives in the villages of the local population, you cannot ignore what he describes as the Maoist rule of thumb, that the enemy can easily fade among the masses.

West also witnessed the Taliban tactic of having their fighters move around in small groups without weapons so that Allied soldiers can’t identify them as the enemy. Only later, during an armed confrontation, do the soldiers realize they are fighting guys who just walked by them – a phenomenon that American troops still do not know how to cope with.

West’s careful examination of the U.S. alliance with the powers-that-be in Afghanistan leads to clear conclusions and recommendations. West shows how it is impossible to rely on the Kabul regime, which does little or nothing to prevent Taliban and al-Qaeda combatants from slipping over the border to safety in Pakistan. He also relates the difficulties of working with the Afghan judiciary, which is both unwilling and unable to help bring rebels to justice in a normal court of law.

However, West remains optimistic about the fighting potential of the Afghan troops. He suggests that the United States abandon grandiose plans for establishing democracy in Afghanistan and concentrate on using a leaner military force of advisers to train the Afghani military that would defeat the Taliban and al-Qaeda, once and for all.

West’s seminal book remains must reading for those who want to gain greater insight into the American presence in Afghanistan. Unlike Vietnam, which was aired in American living rooms in all its horrid detail, the war in Afghanistan is simply not getting the same intense news coverage. West gives the reader the feeling of being on the battlefield in this far-off conflict, even as he expresses ultimate optimism that this is an enemy that can be defeated on the battlefield.

But not through bribery.