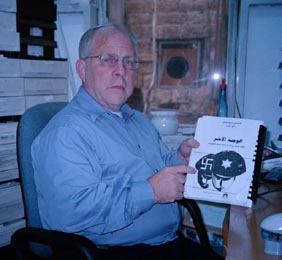 This month, our agency is preparing a new documentary film on Palestinian Authority education, whose schools and school books are funded by democracies around the world, with the encouragement of the Israeli government

The title of Abbas’s doctoral is “Zionist leadership and the Nazis.”, which deals with “The secret ties between the Nazis and the Zionist movement leadership.”. Abbas’ dissertation was written in 1982 in Moscow, at the Patricia Lumumba Institute for Oriental Studies.

That institute was headed by Yevgeny Primakov, a Jew, an Arabist, an ally of Saddam Hussein and other Arab rulers, and eventually the prime minister of Russia.

Abbas claims in his work that the Zionist leadership was interested in convincing the world that a large number of Jews were killed during the war in order to “attain larger gains” after the war and to “divide the booty.”

Abbas goes so far as to claim that gas chambers were not used to kill anyone but only to disinfect them and burn bodies to prevent disease.

Abbas’ central theme is that the Zionist movement and its various branches worked hand in hand with the Nazis against the Jewish people, collaborating with them for the Jews’ destruction because the Zionist leaders viewed “Palestine” as the only legitimate place for Jewish immigration.

Despite professing such outrageous views, which Abbas has never publicly retracted, Abu Mazen has nevertheless been hailed by the media and politicians alike as a voice of moderation..

In May 2003, two months after Abbas became the Prime Minister of the Palestinian Authority, Rabbi Abraham Cooper of the Simon Wiesenthal Center declared that “It is time for Prime Minister Abu Mazen to publicly denounce Holocaust Denial to his constituency and to install leaders in Media and Education Ministries who are prepared to teach Palestinian children the truth about their Jewish neighbors.” Yet in a May 31st, 2003 meeting with Israeli reporters, Abbas would not apologize nor retract of the holocaust denial thesis that he had written. Since that time. Abbas has consistently refused to distance himself from his thesis that the Zionist Movement perpetrated the mass murder of Jews during World War II in cooperation with the Third Reich.

In a meeting with American Jews in June 2010, Abbas was quoted as saying that he “rejected Holocaust denial” Indeed, Abbas does not deny that a holocaust of the Jewish people took place.

Instead, Abbas inculcates a new generation of Palestinians to believe that Jews carried out the crime.

In other words, with the sanction of both the Palestinian school system, and the head of the Palestinian Authority himself, a new generation of. Palestinian pupils learn that the mass murder of Jews in World War II was carried out by Jews.

Our agency asked the spokespeople of the government of Israel if they would demand that Abbas and the Palestinian Ministry of Education to remove Abbas’s holocaust distortion thesis from the shelves of Palestinian schools and from the Palestinian Authority curriculum.

We also asked if Israel would ask the 38 donor nations to PA education if they would make a similar request.

The Israeli Prime Minister’s office answered only in general terms, saying that “The issue of incitement is constantly raised with the PA, notably the incitement prevalent in its schools and curriculum”

However, the Israeli government has never made a specific request that the PA remove Abbas’s thesis from the shelves of Palestinian education.