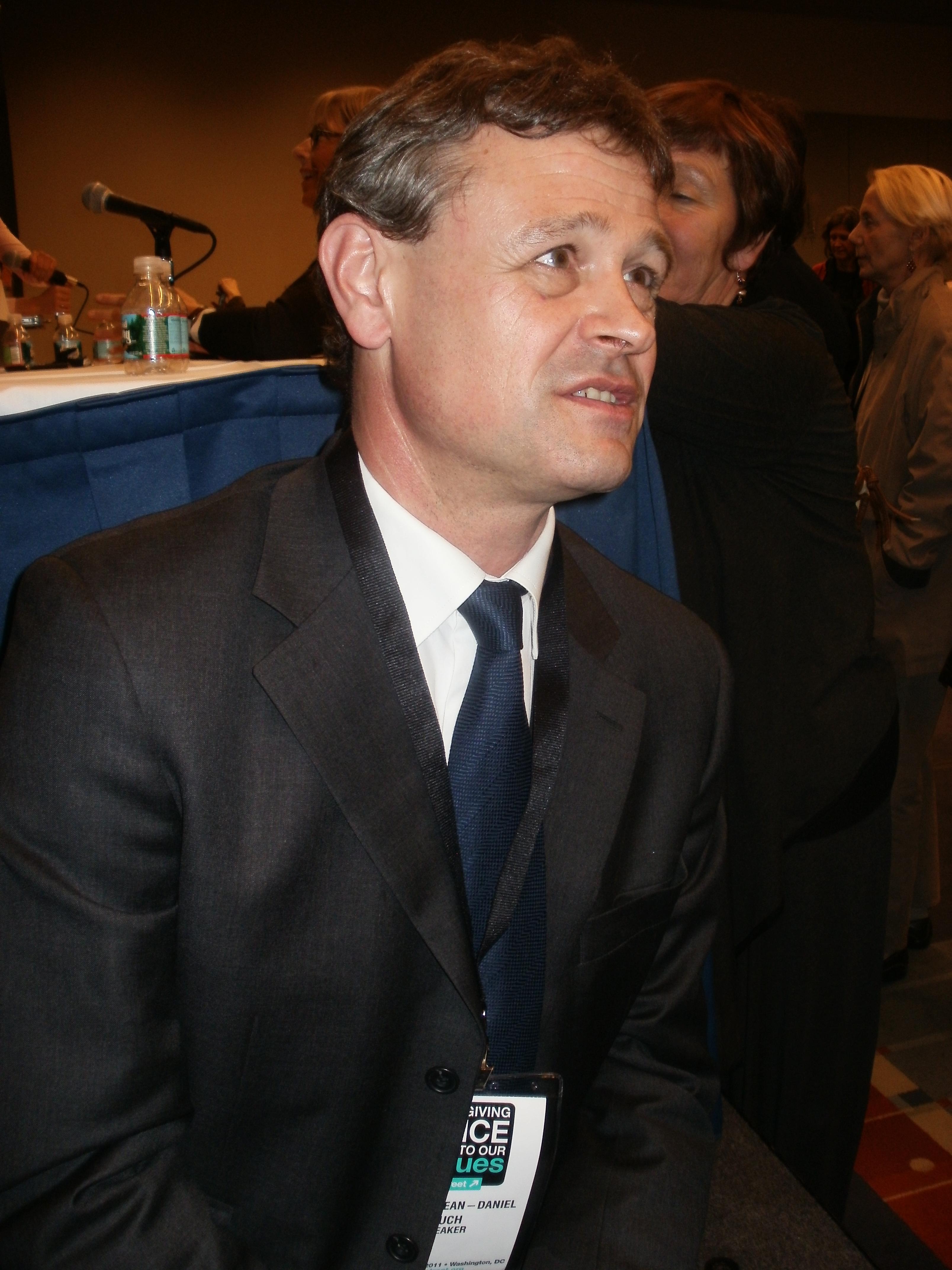 Ambassador Jean-Daniel Ruch, Special Representative of Switzerland for the Middle East, said at a session at the recent J Street convention in Washington in March 2011 that in Gaza the school curriculum used to teach Palestinian children in schools run by UNRWA [the United Nations Reflief and Works Agency] is different and “more Western” than the curriculum taught to children in non-UNRWA schools run by Hamas.

Ruch, whose government recognizes Hamas and believes that Hamas ought to be brought into the peace process, either formally or through back channels, said that he feared that:

“We have a whole new generation [ in Gaza]which is…being educated by Hamas with their social agenda and political agenda. Those people will be fed with the feeling of injustice, anger or revenge. Thank God you still have half the children who are being taught in UNRWA UN schools, where the curriculum is much more like a Western curriculum including teachings on the Holocaust. But still half of the children who will be brainwashed and formatted for implementing a Hamas view…”

Unfortunately, Ruchs statement regarding a Western curriculum in UNRWA schools with teachings on the Holocasut is misleading, as this reporter told him after the session.

In 2010, this reporter spoke with a spokesperson from UNRWA who claimed that UNWRA was bringing in a Holocaust Curriculum in UNWRA schools in Palestinian refugee camps in Gaza and the West Bank. The conversation took place several months after Canada had taken a decision to allocate its money to UNRWA for food-relief only, and not to UNRWA’s general account which would go to funding such items as education. In the conversation, the UNRWA spokesperson tried to convince this reporter that Canada’s stance re: UNRWA was wrong, and that UNRWA was teaching a curriculum that ought to be supported by Western countries, such as Canada, as a new curriculum on Holocaust education that was being introduced. The spokesperson specifically said a new text book for teaching about the Holocaust was in the process of being prepared.

Shortly after that conversation, inquiries were made of Michael Kingsley, of UNRWA from a colleague of mine asking Kingsley if UNRWA planned to introduce a Holocaust curriculum. On May 3, 2010, Kingsley wrote in response:

“I am writing to clarify that there is no “Holocaust curriculum” as such in UNRWA schools and there are no plans to introduce one. For some time, UNRWA has enriched the curriculum in its schools with materials and courses on human rights and peaceful conflict resolution, not least in Gaza, where UNRWA’s management has been particularly imaginative in advancing this and other aspects of UNRWA’s educational programme. In these courses, the 1948 Universal Declaration of Human Rights (UDHR) is introduced as a pivotal international instrument. In that context, the Holocaust is referenced as an event which not only influenced the drafting of the UDHR, but also gave impetus to the progressive development of the human rights obligations in international law. I hope this clarifies.”

Kingsley’s statement above makes it clear that suggestions of an actual Holocaust curriculum or texts to that effect are unfounded.

Note that UNRWA schools in the West Bank and Gaza follow the curriculum and use the school books of the Palestinian Authority as the host entity, in the same way that UNRWA schools in Lebanon, Syria and Jordan use the school books and curriculum from their host entities. This was confirmed in an email this reporter received on August from Chris Gunness, UNRWA spokesman based in Jerusalem, on August 8, 2010 who wrote “ By agreement with all host authorities where we work, we teach host authority books…”

Further as David Bedein, Director of the Israel News Resource Agency has documented and reported, “There is one aspect of the Palestinian educational system in the UNRWA camps that does relate to holocaust. In every Palestinian school library, Palestinian students have easy access to the doctoral thesis written by Palestinian Authority President Machmud Abbas only 26 years ago entitled, “The Other Side: The secret relations between Nazism and the leadership of the Zionist movement” which he submitted in to obtain his PHD at Moscow.”

In his remarks at the J-Street conference Ambassador Ruch’s suggested that the curriculum in UNRWA schools is much more like a ‘Western curriculum.” Does that statement really stand up to scrutiny?
On April 17, 2011, this reporter sent an email to Ambassador Ruch making him aware of a recent report by a leading monitoring organization showing that PA textbooks taught in UNRWA schools, just as they are taught in other schools in Gaza and the West Bank, generally do not even acknowledge the right of Israel to exist-hardly a Western style curriculum (let alone glorification of Jihadi martyrs)
The Institute for Monitoring Peace and Cultural Tolerance in School Education (IMPACT-SE), which reviews textbooks from Israel, the Arab world and Iran, recently unveiled its 2011 report on PA school textbooks.
The organization reviewed 118 textbooks currently used in Palestinian schools – 71 of which are for students in grades one through 12, and 25 that are taught in religious schools in the West Bank and issued by the PA Ministry of Wakf and Religious Affairs.IMPACT-SE also examined 22 teacher guides distributed by the PA Ministry of Education and Higher Education. While all of the reviewed textbooks were approved by the PA, they are also taught in schools in Gaza. Its findings are reportedhttp://www.jpost.com/DiplomacyAndPolitics/Article.aspx?id=216374 .
“There is generally a total denial of the existence of Israel – and if there is an Israeli presence it is usually extremely negative,” said Eldad Pardo, an IMPACT-SE board member, and head of the organization’s Palestinian textbook research group. “For the next generation, there is no education at all about collaboration and no information about the many collaborations that already exist between Israelis and Palestinians in environmental and other areas.”

“In geography textbooks, Israel usually does not appear in maps of the Middle East, instead “Palestine” is shown to encompass Israel, the West Bank and the Gaza Strip. Jaffa is also shown on maps of Palestine, but Tel Aviv and other predominantly Jewish cities, such as Ramat Gan, kibbutzim and moshavim, are notdisplayed.”[emphasis added].

One of the Palestinian textbooks reviewed by IMPACT-SE, History of Ancient Civilization, published in 2009 and used to teach fifth-graders, states that the Levant consists of the states of Palestine, Jordan, Lebanon and Syria. Israel is not mentioned.

Other textbooks read for the study asked students to “color the Negev Desert on the map of Palestine.” Another textbook included a map of the Old City of Jerusalem – which did not contain the Jewish Quarter.

IMPACT-SE also found that Palestinian textbooks include many references to martyrdom, death, jihad and refugees returning to cities and towns in Israel – and frequently demonize Israelis and Jews. Other textbooks told students that “the rank of shahid stands above all ranks,” and included a Muslim hadith about the destruction of Jews by Muslims on the day of the resurrection, which also appears in the Hamas charter. The question I posed to Ambassador Ruch on April 17 in an email was: Since PA textbooks are taught in UNRWA schools both in Gaza and the West Bank, do you not agree that when it comes to teaching about Israel, UNWRA schools are very far from a “Western” style education, particularly since Israel isn’t even shown on the map, most of the time, according to IMPACT-SE?
Ambassador Ruch hasn’t responded.
It’s time for IMPACT-SE to meet with Ambassador Ruch so it can have an impact on his future statements about the curriculum at UNWRA schools. He should be under no illusion as to the lessons that the next generation of Palestinian youth are learning.