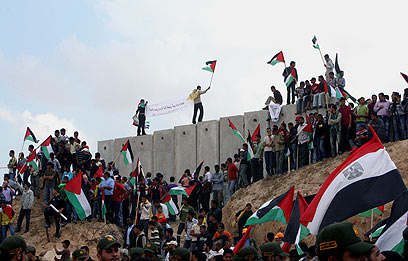 Events that involve enraged masses have a dynamic of their own, especially in the Middle East. They are akin to molten lava, shot out from the belly of a volcano with unexpected force and a destination unknown.

This is what Sunday’s “Nakba Day” events – that even the Palestinian Authority, Hamas and Lebanon never intended to see spin out of control – have demonstrated.

The IDF and police, who recognized the volatile potential, geared for escalation with mass deployments and crowd-control measures – despite the PA’s repeated calming messages; but when spirits are fervid, serious incidents can take place where you least expect them to – the normally quiet Syrian border.

See no evil, hear no evil?

In my experience, you cannot go near the Syrian side of the border without Damascus’ written permission. This is also true now, when unrest is rattling Syria.

Another thing suggesting the infiltration incident was premeditated is the presence of dozens of buses, shuttling Palestinians from what is known as the “refugee camps” near Damascus. While this does not mean that Syria green-lighted the Palestinian rush across the border and into Majdal Shams, there are several indicators suggesting the Syrian authorities encouraged this unusual action:

IDF assessments made several weeks ago suggested that there was a chance the Syrian regime would try to “export” the unrest into Israel – be it via military escalation or through other means – with aim of turning the masses’ rage and the international community’s attention away from Damascus. Israel believes such move was meant to buy Damascus some time to get the riots sweeping across Syria under control.

There is no doubt that Sunday’s events on both the Syrian and Lebanese borders – the latter courtesy of Hezbollah – are very helpful to Assad’s regime. They provide a distraction from what has been going on somewhere else along Syria’s borders – Lebanon – where Syrian forces have killed civilians trying to flee to Lebanon.

Despite these assessments, it seems the events on the northern border have caught the IDF by surprise. The order issued across all sectors was that the crossing of a fence – be it a border, a military base or an Israeli community – is the proverbial line in the sand, after which engaging with or firing on protesters may be considered. The last place the IDF expected this to happen, however, was on the Syrian border. The question of the lack of sufficient deployment and crowd-control measures in this sector is now sure to be explored further.

The dozens of years during which the Israel-Syria border has remained relatively calm led to the belief that it was least likely to prove volatile; but with mass riots becoming more prevalent in the region, more attention should have been paid to the Syrian border.

After all, those dozens of buses did not appear out of nowhere – they were spotted in advance, but the IDF chose to focus on the Lebanese border, allowing for this less than pleasant surprise.

Arab masses all around

There is no doubt that “Nakba Day” events are a prelude to what might await come September, after the PA’s UN bid for statehood. Israel would do well to learn Sunday’s lessons quickly and prepare for mass Arab marches on all borders – including possible Gaza-bound flotillas.

The IDF is currently stocking up on large quantities of crowd-control measures, but this may also beg further exploring, to include heavy barriers, barbwire fences meant for flash-deployment and non-fatal crowd-control measures beyond tear gas and rubber bullets, which are ineffective against hordes of inflamed masses.

As for Israel proper – although the case is still under investigation, it is safe to assume that Sunday’s vehicular rampage in southern Tel Aviv was indeed an act of terror by an Arab man, who was probably overcome by the tensions brewing since Friday.

It is very difficult to prepare for a local terror initiative and the only way to stop them is having the Israeli-Arab leadership act to pacify its public – even if this sensitive time calls for Israel to arrest some of those advocating sedition.