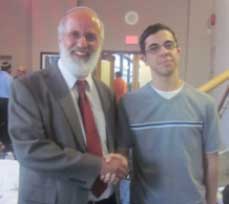 On June 19th, respected Israeli rabbi and local son Yosef Benarroch gave a presentation in the Kanee Foyer at the Rady Centre as part of Winnipeg’s nascent but growing Limmud movement. Originating in Britain in 1980, Limmud is now a decentralized worldwide phenomenon aiming to bring Jewish education to the masses. After hosting its first conference this past March, local organizers such as Faye Rosenberg-Cohen hope that lectures like that of Rabbi Benarroch will continue to generate interest and enrich our Jewish community.

Rabbi Benarroch’s talk was entitled “My Sephardic Journey”. As the title may suggest, his focus was on the origins and history of Sephardic Jewry as well as his own experiences growing up as a Sepharadi in Winnipeg. As a Winnipeg boy who earned rabbinic ordination at the prestigious Mercaz HaRav Yeshivah in Jerusalem and now administers a girls’ seminary in the Holy City, Rabbi Benarroch certainly knows his stuff. But like any respectable Jewish event, the presentation could not begin without first completing the minchah prayers and then enjoying some excellent fruits and pastry provided by Schmoozers’ Cafe.

The speech began with a brief but insightful overview of the millennium-old history of the Sephardic Jews. First, Rabbi Benarroch noted that the term “Sephardic” can have multiple meanings, and can refer to Jews originating only from Spain and Portugal or alternatively include the “Edot HaMizrach”, Jewish communities from countries such as Iraq and Syria that later accepted Spanish refugees while maintaining a pre-existing Jewish population. For simplicity and brevity’s sake, he chose to hone in on the narrower, Iberian element of the Sephardic experience.

Large-scale Jewish settlement in Spain followed the Arab conquest of much of the peninsula in 711 CE, and benefited from the tolerant attitude of its ruling Umayyad dynasty. Sephardim took advantage of this period of tolerance to initiate a “Golden Age” of both Jewish and secular achievements.

The Jews of Iberia produced an extraordinary outpouring of talent, including individuals such as trail-blazing Hebrew grammarian Dunash ben Labrat, legendary linguist and poet Moshe ibn Ezra and famed rabbi, philosopher and physician Moshe ben Maimon, more commonly known as Maimonides or the Rambam. An amazing synthesis of Torah scholarship and worldly accomplishments was the main hallmark of their success.

Sadly, this Iberian oasis of tolerance and progress came crashing down in the late 15th Century, as the Christian Reconquista and union of Aragon and Castille allowed King Ferdinand and Queen Isabella to forgo Jewish aid and expel them from the kingdom with the encouragement of the dreaded Inquisition. It is worth noting, however, that the Most Catholic monarchs allowed their Jewish finance minister, Don Yitzchak Abravanel, to remain in Spain without being compelled to convert. Loyal to his people and to his faith, Abravanel refused this offer and departed for Venice.

The Jews of Spain were left with three heart-rending choices in the spring of 1492: flee their homes, convert to Catholicism and remain behind, or face certain death defying the Inquisition. Some 300,000 chose to seek new lives abroad, but some were luckier than others. Sephardim who traveled to the Ottoman Empire were welcomed with open arms by Sultan Bayezid II, who remarked that the bigoted King Ferdinand had “impoverished his own country and enriched mine” and permitted Jews to settle in lands from Bosnia to Syria and from Greece to Israel. On the other hand, Jews who simply crossed the border into neighbouring Portugal were rounded up and forcibly converted in 1497.

Many Sephardim opted to remain in Iberia and convert, at least outwardly, to Catholicism. A few became genuine Christians, but most remained “anusim”, a term referring to Jews coerced into conversion yet maintaining Jewish faith and religious practices away from the prying eyes of the Inquisition. Over the next few centuries, countless anusim would be put to death in cruel “auto da fés”, public burnings intended to intimidate the so-called “New Christians” into full compliance with Catholicism. Many anusim later fled to more tolerant nations such as England and the Netherlands, where they re-emerged as full-fledged Jews.

Some Jewish refugees crossed the Strait of Gibraltar to Muslim Morocco, and that’s where the story of the Benarroch family begins. In 1963, family patriarch Shlomo Benarroch came to Winnipeg by boat in order to fill the local demand for a shochet, or Jewish ritual slaughterer. Needless to say, frigid, windswept Winnipeg proved to be quite a shock for the family from balmy Tangiers. Nevertheless, the Benarrochs swiftly adapted to their new role as a “minority within a minority” in their frozen city.

There were some amusing instances of kulturkampf along the way. For example, the Benarroch boys (Yamin, Yosef, Michael and Albert) were at first offered to become largely useless French translators at Talmud Torah as their Ladino language was confused with French, an equally foreign tongue to most local Ashkenazim. Traditional Ashkenazic foods, generally quite bland and schmaltzy compared to their Sephardic equivalents, also took a while to soothe the Benarrochs’ palates. But soon, Savta Benarroch was supplying her knish recipe to Omnitsky’s Delicatessen, Winnipeg’s long-time kosher food supplier.

Rabbi Benarroch also spent some time explaining the unique Sephardic take on Jewish living. In his opinion, Sephardic tradition rests on three pillars: tradition through halacha (Jewish law), integration into wider society and a philosophy of moderation. Rabbi Benarroch highlighted the comparative advantages of this approach, noting that unlike Ashkenazic Jewry, Sephardim had never splintered into separate sects such as Orthodox, Conservative and Reform. He also mentioned various leniencies in Sephardic custom as codified by Rabbi Karo in the Shulchan Aruch, including the ability to eat rice, beans and corn on Passover, foods traditionally forbidden to Ashkenazim.

Toward the end of the presentation, there was an opportunity for queries from the audience. I took this chance to ask a probing question: If Sephardic tradition emphasizes moderation and engagement with the secular world, why have leading Sephardic figures, such as Rabbi Ovadiah Yosef, refused to encourage their followers to work full-time like other Israelis?

Rabbi Benarroch adroitly responded by noting his admiration for Rabbi Yosef as Torah scholar, but affirming differences on political matters. In Rabbi Benarroch’s opinion, the Sephardic rabbinic establishment in Israel has strayed from authentic Sephardic practice by favouring mysticism over the rationalism of the Rambam, copying Ashkenazic ultra-Orthodox practices and seeking to segregate themselves from the secularism of the Israeli majority.

He then concluded on an optimistic note, observing that the number of employed Haredim (ultra-Orthodox Jews) increases every year, and that outreach activities such as Limmud continue to reach more and more secular-minded Jews, promising a bright future for the Sephardic “middle path” of Torah and secular achievement.

In the words of the august Rambam, “Anyone who engages in Torah study and does not work, and will be supported by charity – this person desecrates the Divine name, degrades the Torah, extinguishes the light of our faith, brings evil upon himself and forfeits the World to Come”.