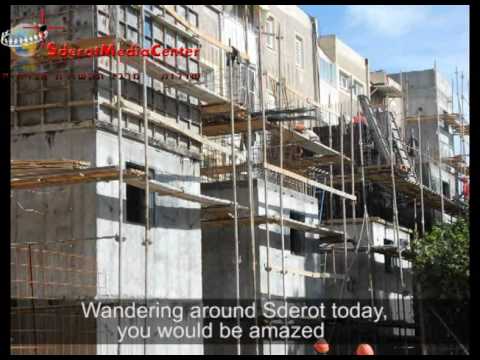 It took me 20 minutes to drive to Ashdod from Tel-Aviv on Sunday morning August 21st, 2 days after Ashdod, the fifth biggest city in Israel, was hit by seven Grad missiles fired from Hamas controlled Gaza. According the IDF Spokesperson’s Office, over 100 rockets and mortars were fired towards Israel since Friday August 19th.

As has been the routine in Sderot for the past five years, my car windows are rolled down, the radio volume is lowered, and I get ready to hear a siren that will give me and everyone else 45 seconds to find a safe place. On the bright side, 45 seconds to run for your life is an improvement over the 15 seconds you have in Sderot.

The local news on the car radio announces burial plans for Yossi Ben Sasson, age 38, who was killed from the Grad missile the night before in Beer Sheva when he was taking his wife, nine months pregnant, for a medical check up. And the news item that follows is about a young woman fighting for her life at the Soroka hospital, also in Beer Sheva.

I reach ‘Admor Me’gor’ street in Ashdod, where only a few days before – at 8:12 a.m. on Friday morning, August 19th, – a Grad missile exploded within range of 900 yeshiva students and high school kids who were beginning their school day.

Yakkov Bozaglo, 56, who was taking shelter from the Grad missile on Friday morning, described the huge explosion and the scene of three seriously injured men as they left their small synagogue; how they were treated for shrapnel wounds on the spot, while thanking G-d that the high school and elementary students were set to arrive 15 minutes after the explosion.

Driving onto the next scene where a missile penetrated three meters deep into the sand, burrowing into a ditch between two synagogues, causing damage, but leaving all the holy books and Ark with the Torah scroll unscathed.

Ariel Zeldman, age 26, who came to see his synagogue that morning, where he prayed during the attack, described how everyone ran outside, crossed the street to the 7th floor apartment building to take cover. Ariel described how he held the hand of an elderly man who only reached half of the distance and was also injured by debris, even though he had 45 seconds to find shelter.

Leaving Ashdod and driving south towards Sderot, “the bomb shelter capital of the world”, there was a sign post on Route 4, next to Nitzan’s tent city encampment, with signs screaming:
“6 years, until when?!”.

The tents and signs depict the anguish of Jewish residents from Gush Katif in Gaza who have been living in refugee-type conditions in Nitzan since the IDF pulled all civilians and military personnel out of Gaza exactly six years ago, in August 2005.

Six years ago, these and other Gush Katif residents pleaded their case to the government and the media, warning that missiles will reach Ashdod if they and the IDF leave Gaza. Today, they point out that the 60 Kilometer range Iranian Grad missiles in Gaza can easily reach the other tent encampments on Sderot Rothschild in Tel-Aviv. The former Gaza residents are genuinely concerned about attacks on other Israeli communities, including those in Tel Aviv, even though many leaders of the Tel Aviv encampment probably favored the forced expulsion of Jewish families from Gaza.

As the Internet site News1 headlined on Saturday night, one million Israelis in a 40 Kilometer radius from Gaza are now under missile fire.

While Iron Dome batteries have been erected near Beershava and Ashkelon, Ofakim and other Israeli communities can only dream of having an Iron dome battery to protect their town

Grad Strikes Ofakim
Ofakim, a development town located 20 Kilometers from Gaza with a population of 30,000 people, was hit Saturday night by a Grad missile which exploded directly into the Amoyal family’s home. The rocket left their family home completely destroyed, something I hadn’t seen in five years of living and documenting Qassam attacks on Sderot. At the Amoyal home I saw brick walls up to 20 centimeters thick crashed and blown away into the kitchen, demolishing four rooms. The blast left Kfir Amoyal, age 25, who was alone at the time, shivering in his bedroom, suffering from shock and from light wounds. Once again, as has happened so often over the years of Qassam attacks, the Islamic terrorists’ goal was not fully realized. The home was destroyed, but the intended victims escaped.

Attacks from Gaza followed by Israeli targeted responses will continue for the foreseeable future. To our dismay, global media will continue focusing on Israel’s restrained response to terrorism while ignoring or minimizing the terrorists’ and their leaders’ actions and constant declarations of their intention to wipe us off the map and out of existence.

In addition to our remarkable military capabilities, Israel needs a policy corollary to the Iron Dome when it comes to dealing with the driving force behind the Gaza terror regime and their counterparts in other parts of the country and the world.

Simply put: Israel must deal with the root of the problem and not waste time debating which specific town to protect or continue throwing money at complex and expensive technology that will, at best, prevent only a small percentage of rockets from reaching their targets.