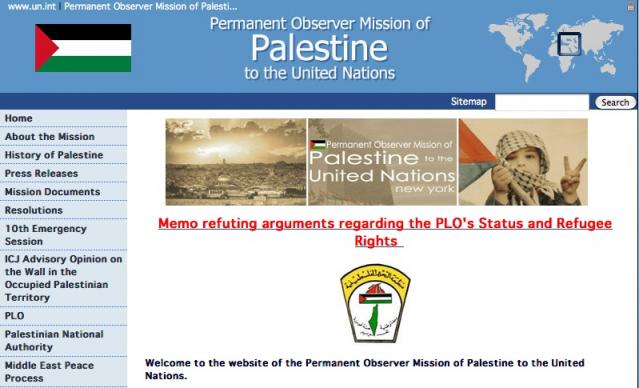 The logo of “the Permanent Observer Mission of Palestine to the United Nations” – on their website and on top of their official statements at the U.N. – shows the Palestinian Authority’s claim to a Palestine that stretches throughout the entire historical entity of the former Palestine mandate. Absent from the logo is any hint that Palestine consists of anything other than Arab territory. No nod is given even to the U.N.’s 1948 decision to divide the region into Jewish and Arab sectors. As for the shape of Israel by the time it was forced into waging the defensive Six Day war in 1967: irrelevant. The logo illustrates that the Palestinian bid before the U.N. for support of a unilateral declaration of statehood is disingenuous and dangerous.

There is not too much left to the imagination here: Israel is “wiped off the map.”