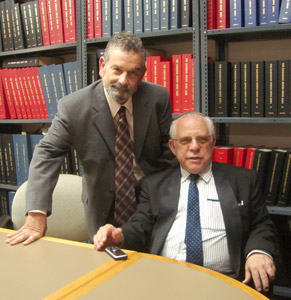 TORONTO – An Israeli watchdog group is urging western governments to make their aid to the UN Relief and Works Agency (UNRWA) conditional on changes to Palestinian texts taught in UNRWA schools.

The schoolbooks are rife with “calls for war,” and they ignore the existence of the State of Israel and the historic Jewish ties to the Holy Land, said David Bedein, head of the Center for Near East Policy Research, and Arnon Groiss, director of research for the Institute for Monitoring Peace and Cultural Tolerance in School Education.

Twenty-five per cent of Palestinian children are educated in UNRWA schools, said Groiss, adding, “You are responsible for what you teach.”

“Hundreds of thousands of children are in [UNRWA] schools, and by a policy of non-involvement in the books, you are responsible for perpetuation of the conflict,” asserted Groiss, who has read 150 schoolbooks published by the Palestinian Authority for all grades.

Bedein and Groiss were in Canada last week to publicize their findings and to brief officials in Ottawa. Later, they addressed reporters at the United Nations and met congressmen as well as State Department officials and White House staff in Washington.

In Canada, they presented the government with a report on UNRWA, which is mandated to provide humanitarian aid to Palestinians. Unlike a second UN refugee agency, UNHCR, which is responsible for all the world’s other refugees, UNRWA rejects the most common solution for refugee populations – permanent settlement elsewhere, said Bedein.

The report, titled Update: UNRWA for Palestinian Refugees, states, “UNRWA for more than six decades has made the notion of ‘return’ the focal point of its operation.

“The refugees themselves pay a price for this policy, for they are maintained in a stateless limbo situation, unable to find permanency and get on with their lives… The reality is they are political pawns, forced to live with uncertainty when their problem might have been resolved, so they might be used to pressure Israel.”

Bedein has long criticized UNRWA for perpetuating the conflict and promoting the Palestinian political agenda encapsulated in the phrase, “right of return” – the demand that refugees who fled Israel in 1948 and their descendants have the right to return and reclaim lost property. This past summer, the dispute heated up when Arutz Sheva published a Bedein op-ed claiming UNRWA sponsored programs based on implementing the “law of return,” even through violence.

Arutz Sheva published UNRWA’s response in which a UN “spokesman vehemently denied it.”

And in reply to a Bedein film that accused UNRWA of promoting the right of return, UNRWA stated: “We furthermore note that no actual evidence has been produced to show that ‘right of return’ activities have taken place in any UNRWA facilities, for which the agency is responsible or that UNRWA is a part of ‘the international right of return campaign.’ If actual evidence is produced, UNRWA will examine the evidence and react as appropriate. UNRWA has publicly rejected any accusations made by Bedein in the past…”

Last year, UNRWA issued a statement in response to other Bedein critiques in the film, For the Sake of the Naqba: “The film states that UNRWA schools ‘adhere to a curriculum that inculcates anti-Israel teachings at every level’ and quotes a 12th grade textbook. In fact, UNRWA does not teach 12th grade, and this is not a UNRWA textbook. UNRWA uses the Palestinian Authority curriculum, which a 2003 independent report commissioned by the United States concluded is ‘peaceful,’ and one in which ‘religious and political tolerance is emphasized.’”

Groiss said his research shows that a theme in Palestinian texts is that “Jews have no historical past or current presence in the country; they have no holy places in the country; and that the Tomb of Rachel, the Cave of the Patriarchs and the Wailing Wall are Muslim holy places.”

“The books never mention a peaceful resolution of the conflict, but liberation and struggle.” There are many references to jihad and sacrifice, and the books refer to both the State of Israel and the Palestinian-governed areas as “occupied territories.” The presence of 5.5 million Jews in Israel is ignored, he added.

Pointing to Hamas control of the Gaza teachers union and to the large number of Hamas members employed by UNRWA, Bedein said: “Hamas is running the schools, which are becoming more Islamic and radical, and UNRWA is co-operating with Hamas.”

Western countries press for changes in UNRWA schools, he continued. Thirty-eight mostly western nations contribute the vast majority of UNRWA’s annual budget, which is close to $1 billion. Canada provided the UN agency with more than $11 million in 2010 for use in the West Bank and Gaza, he noted.

Western governments could also urge UNRWA or help resettle Palestinian refugees, as UNHCR has done in the case of Iraqi Palestinians who have started new lives in Chile and other states, he said.