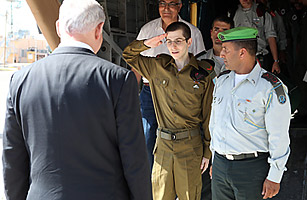 Israel was happy, very happy. The news of a deal to bring home the kidnapped soldier Gilad Shalit arrived with the holiday of Sukkot, a traditionally cheerful weeklong harvest festival made effervescent by the news that a young man held captive by Hamas for five years was coming home to his family. But by the time Shalit actually walked free on Tuesday, so frail he passed out on the helicopter ride home, the elation was tempered by the reality of the price Israelis had paid to set him free. The 1,027 Palestinian prisoners to be exchanged for the lone Israeli corporal turned out to include men and women convicted of some of the worst terrorism attacks in a country still haunted by the memory of the second intifadeh. (See pictures of the five-year ordeal of Gilad Shalit.)

“Ambivalent,” says Aya Ilouz, of her feelings on the matter. Strolling in downtown Jerusalem with her husband Liron and their 5-month-old daughter Yael, the couple is so in sync on the question of the day that they finish each other’s thoughts.

“Yes,” says Liron, “we are very happy and excited to see Gilad meet his family. And on the other hand-“

“We are very concerned,” says Aya.

“About what happens next,” Liron explains. “When the next terrorist blows himself up, someone will have to answer.”

Just around the corner, on King George Street, Alan Bauer had been walking home with his son on March 21, 2002, when a Palestinian man named Mohammad Hashaika detonated a suicide vest packed with metal scraps. The head of a screw pierced his son Yonatan’s brain; the boy survived but was blind for three weeks and still limps. Another bit of metal went through Bauer’s left forearm; he rolls up a sleeve to display the scar, an indentation in the flesh the shape and size of a D-cell battery. Eighty-four other people were wounded that day. Of the three killed, one was a woman pregnant with twins.

Though the bomber of course died, Israeli courts convicted the two women who drove him to the site of the bombing, easing his way past the Israeli checkpoint by buying flowers to carry in the Mother’s Day crowd. The women watched from a safe distance – though still near enough that one entered a restaurant in clothes flecked with flesh.

“These women, as I speak, are being released,” Bauer says.

The Chicago native addressed reporters in a room where the television was tuned, like most other sets in Israel, to live coverage of Shalit’s return. In an abrupt shift of tone, an organizer inserted a DVD of the documentary For the Sake of Allah and the screen was filled with jailhouse interviews of Palestinian militants discussing, often casually, the mechanics of carrying out “operations.” Specifics have a way of undermining the euphoria of Shalit’s release. Among the 477 prisoners released on Tuesday, in the first phase of the exchange, are an organizer of the 2002 Passover bombing that killed 30 people, the deadliest attack of the second intifadeh; a woman who developed an online relationship with a lovesick Israeli youth she then had murdered when he came to meet her; and the man who proudly displayed his bloody hands to the mob gathered outside the Ramallah building where two Israeli soldiers were beaten to death after making a wrong turn on Oct. 12, 2000. (See pictures of Palestinians freed in the prisoner swap with Israel.)

When the list became public, relatives of terrorism victims appealed, without success, to Israel’s supreme court to prevent the prisoner exchange. The court hearing was interrupted repeatedly by distraught survivors, including Shvuel Schijveschuurder, who lost five of his family members in a 2001 attack at a Jerusalem Sbarro. To protest the release of the woman who drove the suicide bomber to the pizza restaurant, Schijveschuurder poured paint on a memorial to Yitzhak Rabin, the Prime Minister slain by an Israeli extremist for signing the Oslo Accords.

“When we say 1,027 prisoners will be released, it’s abstract, it doesn’t mean anything,” says Eliad Moreh Rosenberg, who was wounded in the 2002 terrorism bombing at the Hebrew University cafeteria. “But for victims of terror, it’s a reality.”

Prisoner swaps have happened often enough that statistics have been compiled. Israeli officials calculate that 60% of those released resume terrorism attacks. To help prevent that resumption this time around, Israel insisted that most of the prisoners liberated be sent either to the Gaza Strip – which is sealed off from Israel and under the control of Hamas, which says it continues to observe a cease-fire – or into exile in Turkey, Qatar or Syria. About 100 arrived in the West Bank, where the government led by Palestinian Authority President Mahmoud Abbas works diligently to suppress terrorism, coordinating with Israeli intelligence and military.

Still, in voting against the swap in the Israeli Cabinet, which overwhelmingly approved the deal, Minister for Strategic Affairs Moshe “Bogie” Ya’alon noted that Palestinians freed in a 1985 exchange – which brought three captured soldiers home from Lebanon in exchange for 1,150 prisoners – would later cause the deaths of 178 Israelis. “They’ve essentially released a time bomb for which no one will take responsibility,” says Bauer.

With the future unceratin, on Tuesday, Jewish Israelis stopped and stared at televisions wherever they came upon them. On the sidewalk at midmorning outside the 24-hour Hillel Market, 50 people were gathered under a flat screen to catch the first images of Shalit, looking painfully thin as he was marched through a high-ceilinged hall at the Egyptian border. Behind the cash register, Merav Cohen promised champagne for everyone the moment Shalit entered Israel.

“It was moving. It was very exciting,” says Anat Rubin, 42. “I just saw photos of him getting out of the car. It gave me chills.” But she says she heard Hamas say that, learning from success, it was keen to kidnap more Israelis in order to win freedom for the 6,000 Palestinians still in Israeli prisons. “I don’t want to see the photos of them doing the V for victory,” she says. “Like they won. They are really releasing murderers. I’m happy and sad all together.”