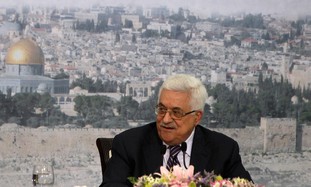 No matter what the Palestinian Authority is offered – money, concessions and even steps toward statehood- the response is always “no.” Media, academic “experts” and governments seem to find this amazing phenomenon very hard to understand.The answer is simple, but a lot of the people paid to deal with this stuff don’t get it. So let me elucidate: The Palestinian Authority (PA) wants everything. The PA wants an independent state on all the West Bank, Gaza Strip and east Jerusalem with no restrictions, no recognition of Israel as a Jewish state, no serious security guarantees, no limits on militarization, no agreement that this means an end to the conflict, no insistence that Palestinian refugees be resettled in the state of Palestine, and nothing to prevent them from pursuing a second stage of wiping Israel off the map entirely.

Now, one could say it’s common for people to want everything and to give nothing in exchange but that certain factors – missing in this case – push them toward compromise.

• Knowing they can’t get a better deal. The Palestinians know the West will always offer more if they are intransigent.

• The impasse favors your adversary because your intransigence will gain it international support. In this case, the more stubborn the Palestinians are, the more Israel is blamed.

• Economic pressure. Since the PA is almost completely supported by foreign aid that is not threatened by its hard line, this pressure does not exist.

• Public opinion pressure to change the situation. In this case, Palestinian public opinion is relatively radicalized and ideological and does not demand a compromise settlement.

• Concern that your political rivals will “outmoderate” you and win by offering to make a deal. In this case, the opposite is true: rivals “out-radicalize” one another and threaten to destroy you politically (and perhaps even physically) if you make a deal.

• Belief that time is not on your side. Due to religious and nationalist ideology, along with misperception of Israel, the PA (and even more so Hamas) believes that time is on its side.

That’s not a complete list. But the point is that the world in general – the United States and Europe, the UN, Arabic-speaking countries and Muslim-majority states – have created a “perfect” system.

• The PA has no incentive to make compromises for peace, so it won’t.

• The world insists that “peace” is an urgent top priority.

• The only variable is Israel, which must be made to give way. But Israel won’t because of past experience and the fact that the risks are now too high.

So nothing will change. There will be no peace process, no Palestinian state. No “progress” will be made. You can read this article in two or three years and it will still be completely up to date. If you don’t understand the points made above you simply cannot understand the Middle East. There will be thousands of emails, hundreds of articles, scores of expensive conferences, dozens of foundation grants and tens of peace initiatives that are all meaningless, because they are based on false premises.

This is not left-wing or right-wing but merely an explanation as to why all the schemes and theories of those who do not see these facts never actually take wing. It may not be politically correct, but it is most definitely factually correct.

Now, you might ask, do I just criticize or do I have constructive policy advice?
I do. Here it is: When the Palestinian Authority rejects the Quartet proposal for negotiations, the United States, European Union and anyone else who wants to go along tells them, “We’ve tried to help you and you don’t want to listen, so since we have lots of other things to do, we’ll go do them. Good luck, and if you ever change your mind and get serious about making peace you have our phone number.”

The previous paragraph would send shock waves throughout policy circles, right? But why? If you can’t solve a problem and – let’s be clear here – the problem doesn’t need to be solved immediately, then you work on other problems. There are no shortage of those! I hope you have enjoyed this article and found it useful. We are left, however, with the following problem: Those in positions of political, media and intellectual power don’t get it.

Solution: Please explain it to them, replace them, or take their place.