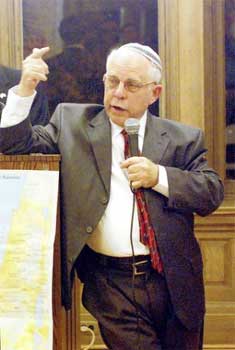 For decades, David Bedein has reported on alleged mismanagement of the United Nations Relief and Works Agency.

Bedein, the Center for Near East Policy Research’s president in Jerusalem, recently produced a 30-minute documentary, “Palestinian Refugee Policy: From Despair to Hope,” that airs at 9 p.m. Nov. 8 on Jewish Life Television. This film portrays UNRWA as an organization dedicated to inciting Palestinian militancy through its educational curriculum and staff in schools and refugee camps in the West Bank and Gaza.

Bedein discussed his goals for the documentary.

“What we’re hoping to do is to inspire people to be better constituents of the U.S., Canada, Europe. etc. and for them to speak to their legislators so that there’ll be a reform of UNRWA and for that UNRWA would no longer be at war against Israel,” he said. David Bedein, president of the Center for Near East Policy Research in Jerusalem, produced the documentary, “Palestinian Refugee Policy: From Despair to Hope,” that airs at 9 p.m. Nov. 8 on Jewish Life Television. (Submitted photo)

The agency has grown significantly over the last 60 years and now has a $1 billon annual budget. Each year the United States contributes several hundred million to the agency and since 1950 it has been the largest single donor – contributing approximately $4 billon to it. The film goes behind the scenes in West Bank and Gaza schools and refugee camps and includes interviews with the agency’s teachers, students and Palestinian education ministers who endorse its curriculum that consistently reinforces Palestinian ideology that calls for the destruction of Israel. It also reveals the agency’s Hamas connection in Gaza, where its 10,000-member teacher’s union is controlled by Hamas members and shows the effect the teaching has had on students. Throughout the years, 41 former students from the agency went on to become suicide bombers. They killed 83 people and wounded another 436.

Bedein discussed ways that the viewers can help counter this ideology.

“What they can do is demand the United States government and the states departments stop UNRWA from promoting these subjects and then urge them to promote peace and reconciliation with Israel as opposed to promoting the end of Israel,” he said.

The film includes an interview with would-be suicide bomber Wafa al-Bas, a Palestinian Arab resident of Gaza, who was arrested with a suicide belt that she planned to detonate in her doctor’s office.

“I was very relaxed when the belt was on my body, because I had the intention to kill as many Jews as I possibly could,” she said in an interview in the film.