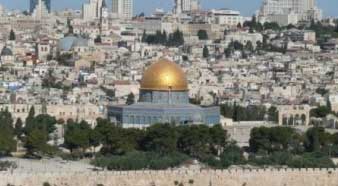 The ongoing pressures exerted against construction in Jewish neighborhoods of Jerusalem like Gilo reflect intensified global efforts to redivide the city.

Like many aspects of the Israeli-Arab conflict, the issue of Jerusalem is being reviewed in a vacuum without relationship to the reality on the ground. It also overlooks the abominable restrictions on freedom of worship in the eastern part of the city between 1948 and 1967 when the city was occupied by Jordan. Jewish holy sites, including the 2000 year-old Jewish cemetery at the Mount of Olives were desecrated, with tombstones used to build latrines.

In the Old City, all 58 synagogues were razed to the ground, including the ancient Hurva synagogue.

Abdulla el-Tal, Jordan’s military governor of the Old City and an uninhibited anti-Semite, proudly proclaimed that “for the first time in 1,000 years, not a single Jew remains in the Jewish quarter… and as not a single building remains intact, this makes the return of the Jews here impossible.”

Christians were also maltreated, with over 60 percent of them emigrating from Jerusalem during that period.

Yet, since the reunification of the city in 1967 following Israel’s victory over the combined Arab assault, complete freedom of religion was immediately extended to all citizens of Jerusalem.

In addition, universities, hospitals and social service facilities provided absolutely equal services to Jew and Arab alike. One need only visit any of the major hospitals in Jerusalem to verify the extraordinary high standard of health benefits that unification provided for Arab residents.

IRONICALLY, JEWS today are the ones being discriminated against by their own government in their own capital. In 1967, immediately after the liberation of Jerusalem, Moshe Dayan effectively handed over the keys of the Temple Mount to the Muslim Waqf (religious authority), who retained total control and jurisdiction over this extensive area which includes the holiest Jewish site in the world. It proved to be a disastrous blunder.

That situation was further aggravated by the rabbinate, which on halachic grounds prohibited Jews from visiting the holy site. However, today many national religious rabbis maintain that Jews are entitled to visit most of the area and even consider it a mitzva to pray there.

But on a recent visit to the Temple Mount, I was astonished to observe the bizarre spectacle of Jews being bundled off by Israeli police in co-operation with the Wakf for quietly engaging in private prayer. I was informed that some Jews who were seen praying are permanently prohibited from visiting the area. This is scandalous.

For Israeli police to deny Jews the right to pray at their holiest site in their own capital because it offends Muslim sensitivities is surely outrageous. It amounts to practicing inverse discrimination, denying the same freedom of worship to our own people which we take pride in guaranteeing to others.

This chaotic arrangement also provided fuel to Palestinians to initiate a massive exercise in historical revisionism in order to bolster their false narrative. They are now frenziedly attempting to deny the Jewish links to Jerusalem and make the preposterous allegation that the Jewish relationship to Jerusalem was effectively a Zionist fabrication designed to justify the “invasion” of Palestine. It is a form of revisionism no less obscene than Holocaust denial and has emerged as a central tenet of hostile Palestinian nationalism.

As late as the 1930s, Muslim Council guidebooks identified Solomon’s Temple on the site. But those references were expunged in 1954 in favor of a new historical “narrative.”

In 2000, Arafat stunned then-US president Bill Clinton at Camp David by declaring that “Solomon’s Temple was not in Jerusalem. It was in Nablus.” On another occasion he said it was in Yemen.

Others, like Palestinian Authority spokesman Saeb Erekat, alleged that “the issue of the Temple… is a Jewish invention lacking any basis.”

PA President Mahmoud Abbas now repeatedly dismisses any Jewish link to the Holy Land and the PA Ministry of Information website describes the Jewish connection to Jerusalem as a “biblical myth.” Even the “moderate” Sari Nusseibeh claimed that “the historical ties and attachments of the Palestinians precede any Israeli claim to Jerusalem.”

These expressions were recently extended to even include denial of a Jewish link to the Western Wall.

Only last week, Sheikh Ahmed al-Tayib, head of Cairo’s al-Azhar University and the principal global religious authority for Sunni Muslims, warned that the continued “Judaization” of Jerusalem, which he claimed had originally been constructed by Arabs, would result in the annihilation of “the Zionist entity in Palestine.”

In addition, we are witnessing a systematic, ongoing course of wanton destruction in which bulldozers have been employed on the Temple Mount by the Palestinian Wakf in order to eliminate ancient Jewish archaeological evidence. But despite protests and expressions of outrage from most Israeli archaeologists, the government has refused to intervene.

The links of the Jewish people to Jerusalem are at the very core of our national and spiritual history and identity.

For over 2,000 years of exile we yearned and prayed for a return to Jerusalem, and since 1800 Jews have constituted the majority of the population of Jerusalem.

IT IS noteworthy that Yitzhak Rabin, in what proved to be his last Knesset speech before being assassinated, pledged that Jerusalem would never again be divided.

Yet the sad truth is that in addition to condemning any construction in Jewish Jerusalem as “undermining the peace process,” neither the United States nor the Europeans have even recognized Israeli sovereignty over west Jerusalem.

There is no doubt that were any areas of Jerusalem ever to fall under Palestinian jurisdiction, the despicable discriminatory practices applied by the Jordanians until 1967 would be reintroduced. Abu Mazen [Abbas] has already publicly proclaimed that not a single Jew would be permitted to live in any future Palestinian state.

It is also inconceivable that neighborhoods like Ramot, Gilo, French Hill, Ramat Eshkol and Givat Ze’ev will ever be seceded from Israel. No power could evacuate over 100,000 Jews from these areas.

German Chancellor Angela Merkel allegedly criticized Netanyahu recently in relation to the announcement of new construction in Gilo, but in view of her personal Berlin background she should be sensitive of the highly negative aspects of dividing a city. Although it will never happen, greater autonomy and allocation of municipal duties could be extended to Arabs in areas in which they comprise the majority of inhabitants.

Interestingly, a recent poll conducted by the Palestinian Center for Public Opinion demonstrated that 59 percent of Arab residents in Jerusalem were satisfied with their standard of living and that the majority strongly objected to dividing the city and living under PA jurisdiction. In fact, as many as 40% stated that if the city was divided, they would prefer to move to an Israeli neighborhood rather than fall under the authority of the corrupt Palestinian Authority and possibly eventually find themselves under Hamas control.