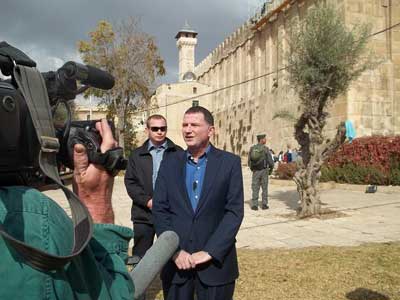 It is a clear blue and busy day in the holy city of Hebron. A small crowd of press gathers around Israeli Minister Yuli Edelstein outside the Tomb of Patriarchs. A Bar Mitzvah celebration is taking place and a procession of musicians lead the Israeli family whose son is celebrating his coming of age to the world’s most ancient Jewish site. Meanwhile, a group of Mennonite Christians from North Carolina make their way up the steps to the tombs, while a local Palestinian tour guide leads a group of Germans to a tourist shop selling hand-made pottery nearby.

Beyond the rather picturesque scene in Hebron today, conflict rears its head elsewhere. Now that the Palestinians have been accepted as UNESCO’s 195th member in late October, they can now apply for World Heritage classification for cultural sites they deem exclusively theirs. Such sites would be protected by the UN and could receive funding from UNESCO for restoration.

The Israeli minister’s visit last Monday came in light of Palestinian attempts to persuade UNESCO (United Nations Educational, Scientific and Cultural Organization) to declare the Cave of Patriarchs as a World Heritage Site belonging to Palestinians only. Israel’s Minister of Information and Diaspora, Yuli Edelstein in front of the Tomb of Patriarchs in Hebron last Monday.
Photo: Anav Silverman

Also known as Ma’arat HaMachpela in Hebrew and the Ibrahim Mosque in Arabic, Edelstein declared that Israel “was now more motivated than ever to show that the connection of the Jewish people to the site goes back thousands of years ago.”

The cave houses the tombs of the patriarchs and matriarchs of the Jewish people; Abraham, Isaac, Jacob, Sarah, Rebecca and Leah. According to the Bible’s Book of Genesis, Chapter 23, Abraham purchased the cave and the adjoining field from Ephron the Hittite, to bury his wife Sarah there.

This past weekend marked the anniversary of Sarah’s death as recorded in the Biblical portion read in synagogues across the world. Over 20,000 Jews from Israel and abroad, visited Hebron to pay homage to the first matriarch of the Jewish people.

UNESCO has worked tirelessly to undermine Israel’s cultural and historical connection to holy sites. In November 2010, the agency classified Rachel’s Tomb, the third holiest site in Judaism as a mosque, Bilal bin Rabah Mosque, “an integral part of the occupied Palestinian territories.” A study of Palestinian Authority school textbooks in 2008, however found that the site was never referred to as such, and instead was known at the “Dome of Rachel,” until 2001, when the term, Bilal bin Rabah Mosque suddenly emerged in new educational textbooks.

According to the Palestinian Minister of Tourism Khouloud Daibes Abu Dayyeh, in addition to Hebron, the Palestinians are also asking UNESCO to recognize 19 other sites in the Holy Land to be incorporated as Palestinian World Heritage Sites including Jericho and Bethlehem.

Franciscans in charge of Bethlehem’s holy places do not want UNESCO to designate Christian shrines in the city as Palestinian World Heritage Sites. Father Pierbattista Pizzaballa told the Italian bishops’ news agency, SIR, that the Greek Orthodox and Armenian patriarchates have asked the Palestinian Authority to exclude the Church of the Nativity from the UNESCO application. “The holy places may be used for political reasons…we do not want to be exploited for issues in which the holy places must not be involved,” Pizzaballa was quoted as saying.

The Catholic Franciscans fear that UNESCO recognition will make it difficult for the church to run the holy sites because the sites would be under the jurisdiction of UNESCO and would have to abide by the agency’s rules.

Meanwhile Edelstein believes that the current Palestinian Authority government is trying to excommunicate Israel from the Jewish site. “They want to wipe out our ties, and any Jewish trace from this area,” he said.

Palestinian Authority Chairman Mahmoud Abbas, during his address to the UN General Assembly in September, referred to the entire Holy Land, as the “land of Palestine, the land of the Prophet Muhammad and the birthplace of Jesus.”

“We don’t want to exclude anyone from holy sites in Israel,” Edelstein emphasized. “Under Israeli policy, Christian, Muslim and Jewish sites have always been open to people of all faiths.”

For about 700 years, Jews were forbidden to enter the Cave of Patriarchs, following a Muslim Mameluk decree which restricted Jews from praying past the seventh step leading to the entrance. The Mameluks, who capture Hebron following the Byzantines and Crusaders in the 13th century, declared the structure a mosque which non-Muslims could not enter.

During the British mandate, the Jews were still forbidden inside the tombs to pray, although a Jewish presence had always been maintained in the city prior to British rule. When Jordan seized control of the area in 1948 during Israel’s War of Independence, the Jordanians forbade the Jews from even living in the city and built an animal pen on the ruins of the ancient Avraham Avinu Synagogue built in the 16th century by the Jewish community. It was only in 1967, after Israel’s Six Day War that Jews were allowed into Hebron again.

Following Israeli control of the Tomb of Patriarchs, arrangements were made which enabled both Muslems and Jews to worship and pray in an orderly manner on the basis of mutual respect. The tomb’s Isaac and Rebekah Hall, the largest and most important hall to Judaism and Islam, as it contains the Imam’s Pulpit (Mimbar) is kept exclusively for Muslim prayers. Jewish services cannot take place in that particular hall except for 10 days during the year.

“Only under Israeli rule can we be sure that this open policy continues,” said Edelstein. “We want to continue to ensure that people of all faiths have access to holy sites here in Israel and can worship freely at them.”

Walid, the local Palestinian tour guide in Hebron on the day of Edelstein’s visit, however thinks differently. “We will have peace here once we get the Jews out of this city,” he adamantly declared, as his group of German tourists lingered in the pottery shops a few feet away from the Cave of Patriarchs.