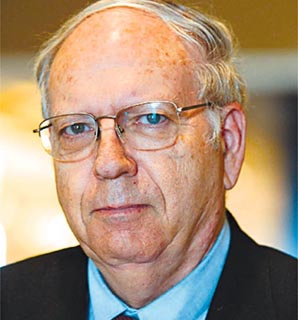 Former Israeli Mossad Chief, Efraim HaLevy [who will be speaking in Winnipeg to deliver the Kanee lecture for the Jewish Historical Society], has expressed concerns that given the increasing instability in Syria which could lead to regime collapse, Bashar al-Assad’s chemical weapons could end up in Hizbollah’s hands.

HaLevy who he worked closely with five Israeli prime ministers-Yitzhak Shamir, Yitzhak Rabin, Benjamin Netanyahu, Ehud Barak and Ariel Sharon,is one of several security experts quoted in a recent article on this subject in the Daily Beast. http://www.thedailybeast.com/articles/2011/12/25/will-hezbollah-get-syria-s-wmd-if-assad-goes-down.html

Ehud Barak, Israel’s Minister of Defense has said recently that he believes it may only be a matter of weeks before the spiraling protests will push the Syrian leader out of power. Other security experts think it may take months.There are fears in Israel that whenever the time should come that Assad is ousted from power, Assad’ss chemical weapons could end up with Hizbullah. Another fearful scenario is that Assad could resort to desperate measures, such as firing chemically tipped rockets at Israel.

“The danger is that the situation in Syria will deteriorate to a point where there will be an absence of an orderly transfer of authority from one power base to another,” Halevy is quoted as saying in The Daily Beast.

“In this kind of situation, the immediate danger is that concentrations of weaponry, including chemical weapons, will fall into Hizbullah’s hands,” Halevy told The Daily Beast, echoing the remarks of other officials who did not want to be quoted referring to sensitive discussions.

According to The Daily Beast, Halevy expressed concern that Syria would break up as a state, creating a power vacuum that could be filled by “nonstate actors”-a reference to groups like Hizbullah and Hamas. Israel has fought three all-out wars with Syria, and in 1967 Israel captured the Golan Heights, Though the border between the two countries has been mostly quiet for years, Syra sent and paid Palestinians from refugee camps to cross into Israel on Nakba Day in 2011. Additionally, in neighboring Lebanon, Syria, which is a client of Iran, is widely believed to be arming Hizbullah, which routinely threatens to strike out against Israel.

In 2006, Hezbollah fired thousands of rockets at Israel during the Second War in Lebanon in 2006. Media reports have consistently indicated that Hezbollah now possesses even more rockets than it did in 2006, and is in a position to strike Tel-Aviv should it wish to do so. The concern is that having chemical weapons at its disposal would significantly empower Hezbollah, (a non-state actor) and likely raise the prospects of a new war.

Although Syria has never officially acknowledged possessing weapons of mass destruction, it is widely believed that its arsenal includes thousands of chemical-laden artillery shells and missile warheads.

Leonard Spector, who directs the James Martin Center for Nonproliferation Studies in Washington, D.C., told The Daily Beast that Western intelligence agencies likely do not know precisely where the arsenal is stored and who guards it, making it difficult to prevent leakage.

“We don’t know where everything is, and there’s no obvious way to destroy these things or parachute teams in to intercept them,” he says. “It would be a very big enterprise.”

According to the Daily Beast,Spector indicated that large-scale attempt to move the weapons would likely be visible to Western satellites, but it would be much more difficult to detect a few hundred shells or warheads.

“It’s not clear if the soldiers protecting these sites… would see responsible stewardship as their mission or would flee, fearing they would be condemned [by the protesters] along with the rest of the regime,” Spector told the Daily Beast.

The preferred case scenario would be for Assad’s regime to give way peacefully to an elected government that would voluntarily dismantle the weapons.

But many assume that Assad will not go gently into the night. It’s possible that Assad fearing the end is near, could decide to go down in a blaze of glory and fire the missiles in all directions, including at Israel. Itamar Rabinovich, former head of Israel’s negotiating team with Syria told The Daily Beast that Israel must communicate to Assad that he would personally be targeted if he orders an attack on Israel.

Additionaly, since the outbreak of the upheaval in Syria, many Israeli security experts have opined that it is a good thing that Israel had not returned the Golan Heights to Syria.

As Maj. Gen. (res.) Giora Eiland has indicated the 1999-2000 Israeli-Syrian negotitations, security arragnements to compensate Israel for the loss of the Golan Heights were discussed. The basic idea was to “gaurantee that in the case of war, IDF forces could quickly return to the place where they are currently stationed. To read Eiland’s analysis of how how Israel does not possess a plausible solution to is security needs without the Golan Heights (which would likely be extensively populated if ever returned to Syria), click here: http://www.jcpa.org/text/DefensibleBorders-GolanHeights.pdf .

As Eiland concludes, “Not only was the ‘solution’ proposed in the year 2000 implqusible at that time, but changing circumstances have rendered Israel’s forfeiture of the Goaln today an even more reckless act.”