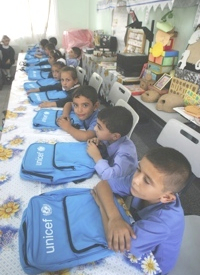 Textbooks provided by the United Nations Refugee and Works Agency (UNRWA) to Palestinian schools have been found to contain strongly anti-Israeli and anti-American sentiments. Experts testified on the content of the textbooks last Wednesday on Capitol Hill, prompting some to once again call into question the United States’ financial support of the UN.

UNRWA, opened in 1950 following the Arab-Israeli war in 1948, is responsible for the health, education, and social services of over five million refugees. According to the Congressional Research Service (CRS), the United States has been the largest donor to the agency since its inception, contributing a total of approximately $4 billion – with the amounts increasing steadily over the past decade.

Arnon Groiss of CRS, the author of the study on the textbooks provided to the Palestinian children, advised the State Department that the books’ content is questionable at best. His report, “Teaching the ‘Right of Return’ in UNRWA Schools,” was commissioned by the Council for Religious Institutions in the Holy Land, an association of Jewish, Muslim, and Christian leaders.

The study shows, for example, that on the cover and on page 7 of the National Education textbook for Grade 2, the image of a Palestinian stamp has a blank square where the Hebrew script that is on the stamp has been removed.

Groiss noted, “Israel does not exist on the map.”

In addition, the textbook provided for Grade 9, Reading and Texts, asks students to “reconcile between the following poetical lines and the feelings they express”: “The morning of glory and red liberty watered by the martyrs’ blood… the hope for the Liberation of Palestine.”

National Education, the version for seventh graders, indicates the following:

The Zionist colonialist greedy ambitions in Palestine started in 1882…. The coming of the Jewish throngs to Palestine continued until 1948 and their goal was taking over the Palestinian lands and then taking the original inhabitants’ place after their expulsion and extermination….

Another 7th-grade textbook, Our Beautiful Language, features this excerpt from a poem entitled “The Martyr”: “Hearing weapons’ clash is pleasant to my ear and the flow of blood gladdens my soul/ As we as a body thrown upon the ground skirmished over by the desert predators/…By your life! This is the death of men and whoever asks for a noble death – here it is!”

Similarly animosity-provoking language appears in the 8th-grade version of Reading and Texts: “Your enemies killed your children, split open your women’s bellies, took your revered elderly people by the beard and led them to the death pits…”

The 5th-grade version of Our Beautiful Language includes a poem entitled “We Shall Return,” which discusses the Palestinian “Right of Return””

Other language in the texts appears to justify terrorism. A sentence from the 8th-grade Reading and Texts exhorts, “O brother, the oppressors have exceeded all bounds and Jihad and sacrifice [fida] are imperative…”

According to U.S. Rep. Chris Smith (R-N.J.), chairman of the House Subcommittee on Human Rights and co-chairman of the Bi-Partisan Coalition for Combating Anti-Semitism, the United States should take responsibility for what is in the textbooks, because it provides funding for UNRWA. “We are responsible for the content and the content has been, year in and year out, explosively anti-Semitic, anti-American and anti-Israeli,” Smith contended.

Last year, UNRWA came under fire for providing a curriculum that does not include the Holocaust. Commentary magazine reported last March:

The Union of Arab Workers at UNRWA put out a statement saying that the Holocaust shouldn’t be taught in any of UNRWA’s five areas of operation – Jordan, Lebanon, the West Bank, Gaza and Syria – and that instead the space should be used to teach students about the Right of Return. That would ostensibly “enrich” sixth and seventh generation Palestinian children by telling them that some day they’ll be overrunning Israel, and it would make the lessons consistent with the rest of UNRWA’s war curriculum.

According to UNRWA, that curriculum falls in line with the Hamas government’s policy of denying that the Holocaust took place. Government officials in Gaza have encouraged school children to leave classrooms if lessons on human rights featured information regarding the Holocaust. The government said it would do everything in its power to prevent the children from being taught about the Holocaust in UNRWA schools in the Gaza Strip. Gaza Education Minister Mahammad Ashquol said that his ministry “will never allow teaching Holocaust to Gazan refugee camp children.”

This year, the content of the textbooks and the curriculum is equally contentious.

Congressman Smith believes that the United States is in a valuable position of being able to mandate that the textbooks be revised so as to remove the inflammatory content. “It would be based on a certification where the president would have to certify that the UNWRA textbooks are completely excised of all anti-Semitic hate.” Smith said, adding,

And so, if you teach kids to hate when they’re very, very young and just keep feeding them that kind of formula for violence, why are we surprised when they strap on dynamite and other kinds of explosives to kill themselves and think they’re doing a good thing? They’ve been taught. And we have to be much more emphatic – zero tolerance on hate in those textbooks.

David Bedein of the Center for Near East Policy admits that the notion of “Right of Return” is regularly promoted at Palestinian refugee schools, but as noted by Groiss, the idea involves the virtual elimination of Israel, and helps to “propagate this non-peaceful line, in absolute contradiction to the UNWRA declared mission.”

What’s worse is that according to Groiss, despite the controversial nature of the Palestinian books, they are in fact an improvement from the other textbooks found in the Arab world. Unlike the Palestinian books, which have at least some oversight from European nations as a product of the United Nations, other books found in the Arab world have none. Groiss explained,

The books of the Arab world are not financed by European countries so they are free to write whatever they want. In Syria, for example, they call for the elimination of Jews. School textbooks in Saudi Arabia are among the worst for incitement, with anti-Semitic propaganda given as fact. Even after 30 years of peace with Egypt, the name Israel does not appear on any map in Egyptian schoolbooks.