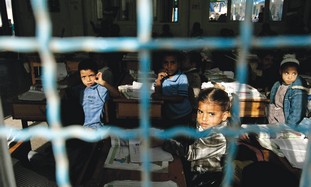 The UN Relief and Works Agency for Palestinian Refugees (UNRWA) is one of the greatest stumbling blocks to the peace process, MK Einat Wilf (Independence) said at a meeting with 65 ambassadors and senior diplomats from around the world in Bar-Ilan University on Tuesday night.

Wilf launched a new, international parliamentary campaign to restructure UNRWA and “combat the inflation of numbers of refugees” to make a two-state solution possible.

“When I hear a Palestinian say that there is a ‘right of return’ into the sovereign State of Israel, I question whether they want peace and accept the idea of a two-state solution that includes a state for Jews and a state for Arabs,” Wilf explained at a Bar-Ilan University Ambassador’s Forum discussion on UNRWA.

Unlike the UN High Commissioner for Refugees, which deals with all refugees that are not Palestinian, UNRWA provides services to the descendants of refugees of the 1948 War of Independence, thus increasing the amount of refugees reported each year.

Wilf called for the international community to address the inflation in refugee numbers, and plans to appeal to parliamentary committees that are responsible for approving budget contributions to UNRWA.

Her proposal is for those committees to move funding to UNRWA from core funding, for general purposes, to targeted funding, for specific purposes.

For example, Wilf said, if Gaza is indisputably part of a future Palestinian state, a baby born in Gaza today should not be considered a refugee. Donor countries could continue to fund hospitals, schools and welfare in Gaza, but the aid should not be connected to refugee status, rather need.

The Independence chairwoman also accused UNRWA of undermining efforts to bolster the Palestinian Authority as the future government of a Palestinian state, and suggested that funds directed towards UNRWA programs in the West Bank be transferred to the PA to strengthen its future state.

In addition, Wilf called for UNRWA programs in Lebanon, Syria and Jordan be merged with those of the UNHCR.

Once these steps are implemented, she explained, the amount of refugees will be “deflated,” and lowered to approximately 30,000.

According to Wilf, the “real number” will pave the way for a two-state solution, in that “even a right-wing government” could accept those refugees into Israel, if they agree to live in peace with their neighbors.

A number of the diplomats present, who hail from six continents, opposed Wilf’s proposal that these steps be taken before a final peace agreement, saying that core issues must be dealt with via negotiations.

The MK, however, said that if the process is not inverted, negotiations are much less likely to be successful.