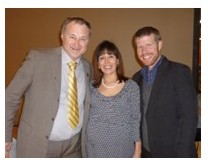 Tucked away in a small building off the main street of Sderot, Israel, and just a few blocks from the Sderot Police Station and their infamous Rocket Museum, lies the home of the Sderot Media Centre (SMC). The SMC is an independent news outlet that relies on private donations. The SMC is the only media centre in the western Negev, countering the continuous onslaught from over 20 media outlets in Hamas controlled Gaza.

The Director of the SMC is a remarkable young man, Noam Bedein. Noam was in Winnipeg recently at the sponsorship of B’nai Brith Canada. The purpose of Noam’s visit was two fold; to bring the Jewish, Christian and Aboriginal communities up-to-date about the Gaza narrative (the demonization and ultimate destruction of Israel) as a reflection of the new antisemitism. He was also here to meet with several community leaders to discuss this years antisemitic gathering known as Israel Apartheid Week.

On Wednesday evening January 25, Noam presented to nearly 100 people at the Rady Jewish Community Centre. The topic was Hamas, Gaza, and the Arab Spring: A view on the ground in Southern Israel. The event was sponsored by the B’nai Brith’s Canada Jewish/Christian/Aboriginal Roundtable. Noam was introduced by David Matas, Senior Counsel for B’nai Brith Canada. David noted the SMC has hosted dignitaries, heads-of-states, government officials and student groups from around the world. He said Noam has spoken to over 150 university campuses and in 2010 was sent to South Africa by the Israeli Government to counter Israel Apartheid Week (IAW). He mentioned that Noam also presented at the Goldstone Commission on behalf of the residents of Sderot.

The very diverse audience included not only Jewish members of our community but also leaders and members of the Christian and Aboriginal Communities A special attendee was Anje Van Tongeren, The Ring Lady.

Noam explained he wanted to describe what is happening in the region and how it is affecting the world at large and represents the broader issues faced by Israel and the world. He started with the terrifying “15 Seconds Video ” produced by the SMC showing Israeli children from Sderot enjoying the warm Negev sun, when suddenly the Tzeva Adom (Red Alert) alarm sounds sending them running to a nearby bomb shelter. In Sderot, one only has 15 seconds to find shelter. As the video played the room became silent.

Later, Noam showed another video of Kindergarten children, once inside the shelter, beginning to count down from 15; 15, 14, 13, 12,…2,1 and then they all start singing. Singing drowns out the anticipated blast from the incoming rocket.

Since 2000, approximately 13,000 rockets and missiles have been fired into Israel from Gaza; 1064 since the end of Operation Cast Lead in January 2009. Noam told the mesmerized audience that Sderot is the only city in the world where innocent civilians have been under constant rocket attack for the past 10 years; and where, by-and-large, it is ignored by the world community.

During the past three years, after nearly 10 years of rockets, the Israeli government has spent upwards of $500M to construct 6000 bomb shelters in every home and apartment in Sderot and the surrounding area. Today, with more sophisticated rockets and missiles they are flying over Sderot on their way to Be’er Sheva and headed north to Ashkelon, Ashdod, and more recently all the way to Richon Litzion, just outside Tel Aviv. Still, Sderot has a generation of children who have been traumatized, with 70-90% suffering from Post Traumatic Stress; where tranquilizers form a basic part of most childrens’ diets. In the end, Noam said, “protection is not the solution.”

Noam described in elegant detail the four main messages emanating from Gaza, all of which are aimed at delegitimizing Israel and its right to exist: fallacies of military seige and massacre/war crimes, the alleged humanitarian crisis, and the use of disproportionate response to rocket fire. In response, he offered specific documentation that counters this misinformation. He noted that Israel is the only democracy in the world fighting terrorism on it borders. Rhetorically he asked, “How can Israel be accused of war crimes, when many of the countries on the UN Human Rights Council are some of the world’s worse offenders?” While accused by Hamas of creating a humanitarian crisis in Gaza, the facts speak for themselves. Since 2008, according to Noam, over 58M gallons of fuel have been delivered, over 1M tons of food, 45,000 vaccines, 8.8 tons of medicines and equipment and 95 truckloads of water and sewage equipment. The response from Gaza and Hamas, more rockets and missiles.

And finally, Noam explained that 97% of the rockets fired from Gaza come from within civilian neighbourhoods and that most of the1000 mosques in Gaza are storage facilities for rockets and weapons. He showed pictures of weapons being uncovered in these mosques and noted that the Gaza propaganda machine will never show the world these pictures, only the mosques being destroyed by Israeli Forces.

Noam went on to describe how the situation between Gaza and the western Negev is the prototype of the relentless delegitimization campaign being carried out around the world by many groups. The challenge today, in contrast to the past, is about one issue – “the right of Israel to exist as a democratic Jewish state.” But, it is being “packaged” to make it more palatable to the uninformed.

Noam briefly commented on the “Arab Spring”, which he reframed as the “Islamic Winter”. He noted the election results in Tunisia, Libya and more recently in Eqypt are not encouraging, but only time will tell how it will ultimately unfold. He noted that Hamas in Gaza is Iran’s proxy and determined to carry out Iran’s plan to destroy Israel. He noted the world is quick to criticize Israel whenever it defends itself against Hamas attacks from Gaza, but until recently was virtually silent on Syria.

At the conclusion of his presentation, Noam answered a few questions. In response to one question about the media war, Noam noted the focus of the Sderot Media Centre is to tell the story from the Israeli side and repeated that Israel is fighting a media war. He noted that the Palestinians are perceived as the underdog and are masters of misinformation. He went on to note that everywhere else in the world, the United Nations helps re-settle (emphasis added) refugees through the UN High Commission on Refugees (UNHCR), EXCEPT in the case of the Palestinians. In their case, the UN established a different program in 1949, UNRWA (United Nations Relief and Works Agency for Palestine). Noam stated since its establishment, it has not re-settled a single Palestinian. Instead, it keeps them in refugee camps while perpetuating their suffering in order to promote and continue the Gaza/Hamas narrative of a right of return. It sponsors anti-Israel schools, textbooks and camps where children continue, to this day, to be taught that Israel is an occupier and oppressor even though Israel left Gaza and removed all Jewish settlements there over 5 years ago.

Closing remarks were provided by Reverend Raymond McLean and Belle Millo, Co-chairs of B’nai Brith’s Jewish/Christian/Aboriginal Roundtable. Reverend McLean commented on the Aboriginal community’s strong solidarity with Israel and noted he has visited Israel over 16 times; leading tours for members of our First Nation Communities. Belle Millo summarized the importance of Noam’s comments for the entire Winnipeg community, emphasizing the need to work together to combat the growing trend of antisemitism as reflected in current day anti-Zionist and anti-Israel rhetoric.

After his presentation, Noam spent another hour speaking personally to many of the attendees at the presentation.