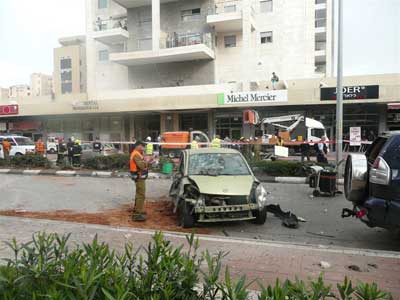 A rocket war rages in the south of Israel as more than 200 rockets have been fired at urban areas since Friday afternoon, following Israel’s killing of the leader of the Popular Resistance Committee (PRC), the terrorist group behind the kidnapping of Gilad Shalit. Only a little more than an hour away from Jerusalem, the port city of Ashdod, has been the target of massive Grad rocket attack from Gaza, along with close to 1 million civilian Israelis living across the south. As I enter the city around five in the evening, the wail of the siren suddenly sounds and the bus I’m traveling on from Jerusalem suddenly stops. The driver, an elderly man, halts to let the passengers off according to safety protocol. Residents living in Ashdod, Israel’s fifth largest city, have 45 seconds to find shelter once a rocket fired has been from Gaza.

Some of us lay on the ground with hands over our heads, while other take cover near a cement wall. It’s strange how quickly you find yourself adapting to survival mode. A few seconds later we hear a boom. And then the discussion begins-“Did the rocket actually land in the city? Or was it the sound of the Iron Dome intercepting the rocket midair?” We get our answer a couple seconds later, as we see a puff of gray smoke in the sky and hear a much louder explosion in midair. The Iron Dome, Israel’s short air defense system against incoming rockets and artillery shells that are fired at a distance of between four to 70 kilometers (three to 45 miles), has worked wonders during this escalation of rocket attacks against Israeli civilians. According to Israeli military officials, the Iron Dome had a 75 percent success rate on Monday as the system was able to stop 23 of 31 rockets fired at urban areas. And at the moment it has worked again.

The passengers make their way back to the bus, some slightly hysterical and others more calm. The bus driver checks twice to make sure that everyone is back on. And then the phone calls begin. “It’s been the eighth time today that the siren has gone off!” one woman exclaims on the phone. Another passenger calls her kids to tell them she’s on the way home. The white-haired bus driver tells me that there is nothing to be scared of, that this is just another day on the job. Anav Silverman / Description: Yaniv Araha stands behind his
hair salon with a hair spray can full of shrapnel holes.

However, a few hours earlier around 2:30 pm in the afternoon, a Grad rocket that the Iron Dome was unable to intercept, landed in a residential shopping area, causing extensive damage to businesses, property and vehicles. Two people were injured including an elderly woman, who was evacuated to a medical center in Rehovot after being struck by flying glass shards, along with another person. Eight people were treated for shock.

Business owners still looked in shock from the attack few hours later, as people mill around broken glass and debris that cover the sidewalk. Clothing mannequins lay on the floor in one store, with clothes strewn everywhere and the glass entry doors no longer intact. Yaniv Araha, part owner of a hair Michel Mercier salon, shows me a hair spray can that has pierced with pieces of shrapnel. “We were very lucky,” he says. “One of the stylists had to be hospitalized for injuries, but the rest of us including our clients who were with us at the time-are fine.” Araha shows me a protruding wall inside the hair salon where he took cover. “The shrapnel was able to reach all the way to the back kitchen,” he explains, “but the wall protected us.”

Across the street, an apartment building is covered in shrapnel holes, close to the crater-like hole in the sidewalk that the Grad rocket has left behind.

One resident holds in his hand, tiny metal balls that had been packed in the rocket, which now lay harmlessly outside the apartment building. “If one of these had struck someone, G-d forbid…” he says and shakes his head. “We experienced a miracle here today. The outcome could have been much worse.” Adi Ben Hamu, the spokesperson for Ashdod’s municipality explains that the municipality has worked very hard since the last rocket escalation against Ashdod during Operation Cast Lead to prepare residents for the next barrage of Gaza missiles.

“The first time Ashdod residents were targeted by rockets three years ago, we were not prepared,” Ben Hamu said. “There was a lot of hysteria, almost 800 people experienced shock and had to be treated. “

“This time, not only do residents know how to act and follow safety procedures, but we also have the Iron Dome which has stopped many of the rockets and has helped boost morale,” he said. “Residents must still enter a protected area in any case because shrapnel from the rockets can still strike from above.”

“We know how to take care of ourselves,” emphasizes Ben Hamu. “But no civilian can tolerate rockets fired by terrorist groups as a way of life and no country in the world would allow civilians to suffer like this.”

“The Israeli government needs to do whatever it takes to stop these rocket attacks on Ashdod, Be’er Sheva, Kiryat Malachi, Gan Yavne, Ashkelon and smaller communities across the south. In Ashdod alone we have close to 250,000 people, with 55,000 students, K-12, unable to go to school during these rocket escalations,” added Ben Hamu.

In regard to school, there has been a temporary solution, with teachers assigning homework assignments to students via e-mail and Facebook.

On even more serious note, Ben Hamu concluded that there was a much greater danger out there than the current Grad rockets being fired. “Everyone here is aware that there could be a much more serious and massive attack of missiles –from Iran. This is what we have to prepare for and for an attack of that proportion, we cannot wait last minute,” he said.

Anav Silverman is an educator at Hebrew University High School and current writes for Tazpit News Agency. She made aliyah from Maine in 2004.
Email. anav.sderot@gmail.com