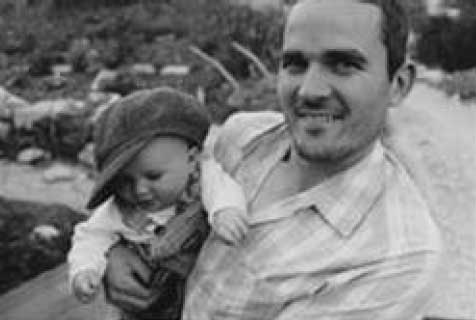 All a family hopes and prays for is to raise their children, have grand-children and live happily ever after. Those hopes and dreams were shattered one Erev Shabbat (On route 60, last September) when Arabs threw a block of concrete from their moving vehicle, through the window of the car that Asher was driving. Consequently, the vehicle crashed into the ravine upon the ragged rocks; crushing the car and claiming the live of two young Jewish souls.

The fact that the attack was mechanized shows a level of planning, premeditation, and sophistication that demonstrates intent to kill. In additional, the terrorist had worked for worked for weeks to perfect their method of attack using a car to deliver a projectile in a sophisticated, calculated way of killing Jews.

Initial reports claimed that this was a highway accident, during which Asher was travelling at high speed and therefore crashed his car after losing control. However, after a subsequent investigation into the crash, the IDF announced their suspicion that the Palmers were murdered as a result of the large rock thrown at their moving car from a car being driven by the Arabs.

The vehicle went out of control but the projectile itself may have killed Asher. There were no skid marks on the road. The lack of skid marks alone, known immediately by the police, indicated that Asher did not “lose control” but had been killed or knocked out by the projectile. The initial reports were obviously a cover up.

Even after all this being said, the goal of Michael Palmer and his family is to see that justice is brought to those who committed this horrific crime and to speak out for the innocent (Asher and Yonatan) who can not speak on their own behalf.

During the first hearing, which was held November 2011 also at Machane Ofer, the

Military Advocate-General indicted six Arab men of allegedly being part of a terror cell formed to harm Israelis, in connection with the Palmers’ deaths.

On Sunday, March 11, 2012, the court convened at Machane Ofer to continue hearing evidence related to the case and to set dates for future hearings.

The court rooms are housed in a row of small caravan- like trailers. According to a Prisons Service guard on duty Sunday, these courtrooms are busy, hearing upwards to 80 cases each day, sometimes as many as 100.

Six defendants were on trial on Sunday – Ali Sa’adeh, Wa’al al-Arjeh, Iyad al-Baw, Mahmoud al-Baw, Hasan Saádeh and Mohammed al-Baw, they were charged in the court under the Military Order regarding Security Provisions (1651) in the Yehuda and Shomron.

The indictment against the six accused Arabs reads that they formed a cell to perpetrate attacks of revenge upon Israelis for a “price tag” incident involving damage done to a mosque in Nablus, which happened shortly before the killings. Their plan was to throw rocks from a moving car, in Yehuda and Shomron. This group of Arabs worked at perfecting their methods of killing Jews before they succeeded with Asher and Yonatan by attacking other cars carrying Jews in Yehuda and Shomron. The indictment alleges their intent was to kill Jews.

Ali Sa’adeh is charged with murder, which holds a maximum penalty of a life sentence.

The indictment lists a total of 23 charges. All of these charges are related to attacks and security offenses in the area. The indictment also includes an attempt to fire an M-16 rifle at a passenger bus on Route 60. Other charges against him include membership in a group whose purpose was to that intentionally caused death; punishable by a life sentence. He was also indicted for illegal military training.

Each of the remaining defendants (Iyad al-Baw, Mahmoud al-Baw Hasan Saádeh and Mohammed al-Baw) charges – were also read. Each appeared to have its own lengthy record of offenses, amongst which was belonging to a group whose member’s intent was to murder Jews.

As proceedings began, prison guards led in the shackled defendants. Their hands were unshackled but the leg irons remained secured. From their ring-side seats, the defendants waved and called out to family members sitting in the visitors’ gallery nearby.

When asked, “How many supporters would be allowed to enter for each prisoner?” the prison guard replied, “They are allowed 1 or 2, maybe even 3 relatives to support them during the court hearings. The guard in fact mentioned that there is no real limit imposed.

As usual the Arabs were being made out to be the victims, even though they were on trial for the heinous murders of Asher and Yonatan.

Meanwhile on the opposite side of the court room from the defendants, the victims’ relatives were allowed to bring just 10 people; a far cry from that which the defendants were allowed. This was no where near the more than 100 people that had registered as requested to support the Palmer family. Many of those who came to support the Palmers travelled from near and far to present for Michael Palmer and his son Shmuel.

Michael had sent a request for support during for this hearing, after experiencing the previous hearing in February with just him and his son Shmuel. “There was a frequent exclamation of support for the terrorist. During all this the court stood by and allowed this which greatly upset Michael.

When Michael Palmer was asked about how he felt about the seeming unfair treatment, his response was as follows: “I wouldn’t want to suggest that the terror supporters and victims should have equal numbers. There is no way to “balance out” terror supporters in court with supporters of the victims. Justice for the victims of terror and through that, for Israeli society should be the most important objective of the court. The court should encourage victims’ families and supporters to be present.

There was a panel of three judges, led by Lt. Col. Ronen Etzmon, who presided over the hearing. The court asked each defendant to stand in turn while the judges read out the charges against them in Hebrew and an interpreter translated them into Arabic. The judges then asked the defendants whether they understood the charges and to provide their pleas. One defendant, Iyad al-Baw responded “I understand the indictment against me, but it’s not correct.”

While the defendants’ lawyer, Haled al-Araj asked for a two-month trial delay to review witness evidence, the military prosecutor objected, insisting that the court case had already been substantially delayed with indictments filed four months ago. The judges agreed to hold the next major hearing on April 18.

Before and after Sunday’s hearing, the Palmers raised the issue of how the trial proceedings were conducted, including several delays the defense had requested since the indictments were filed in November. The Palmers were not alone on this issue; many people at the trial voiced their discontent with the way the families of the victims were treated and cared for during the lengthy legal proceedings.

Michael made it clear many times that he was very upset with the IDF. In February they sent a car to bring the Palmer family from Jerusalem to the court. For Sunday’s hearing they claim they were unable to do so and that left Michael and Shmuel to make their own way to the trial. As they arrived without an IDF escort on Sunday, the Palmers had to stand and wait outside the court compound entrance for some twenty minutes, less than a meter from family members of the six defendants.

Every time Michael Palmer would mention yet another issue that bothered him about how things were being done or not being done, he would also say in one way or another that his discontent was that justice was not being pursued and respect not being given to the victims and their families “It dishonors the memories of Asher and Yonatan, that their families must go through this,” said Michael. “It causes me a lot of pain to have to stand here in line next to the relatives of those who murdered my son.”

Despite the delays, the Palmers said they were grateful for the support shown to them by the prosecution and members of the public on Sunday. One hopes that the show of support will help the court to feel the presence of Asher, a 25 year old man, and Yonatan his one year old son in the room, honor and respect their memories, and bring justice to the families of those who were murdered. There was far too much a cozy and chummy atmosphere in the court that day. This is, after all, a double murder trial.

“I hope and pray that there will be justice, and I thank the prosecution for doing its best to get things moving,” Michael said. “It’s important that all the defendants get the outcome they deserve.” The Palmers, however, are resigned to a long and painful legal process.

“The prosecution is concerned that it’s hard to prove murder. But, the terrorists chose the best method they had to kill a Jew, a heavy object aimed at the head of the driver of a moving car. Who wouldn’t know beforehand that this kills?” What’s so hard to prove when the fact is Asher and Yonatan are dead.

What happened in this court room was nowhere near what I had expected to see. Not that my court room experience is extensive, but just the same, the behavior and atmosphere displayed during this trial left me totally appalled and to say shocked is putting it mildly.

If the court finds the defendants guilty of deliberately causing the deaths, it will set a legal precedent, as to date, no one has ever been convicted of murder as a result of rock throwing. Neither police nor the courts consider a rock to be a deadly weapon.

The content of this article has been reviewed and approved by the Palmer family.